Is the all-new Triumph Street Triple RS the game-changer its makers claim it to be? We throw a leg over to find out.

When the all-new Triumph Street Triple line-up, consisting of the S, R, and RS models, was first unveiled back in January I was excited. Really excited. Cope was sitting next to me at the press event; he says I was muttering quite a lot of joyful expletives. I don't remember that, but I'm not surprised: this is a bike that means a lot to me.

I bought a Street Triple R completely blind in 2008. I wasn’t really looking for a new bike at the time but one appeared at a local dealer. It sounded good, looked even better and seemed to fit my 5-foot-9 frame perfectly. It was all a bit too convenient, really. It even had everything I wanted already fitted to it: a belly pan, seat cowl and a set of Arrow underseat exhausts. And it was an R to boot, with the adjustable suspension, slightly tweaked chassis, and Nissin radial calipers from the Daytona. To cut to the chase, I just had to have it, and looking back, it’s possibly the best impulse purchase I’ve ever made. 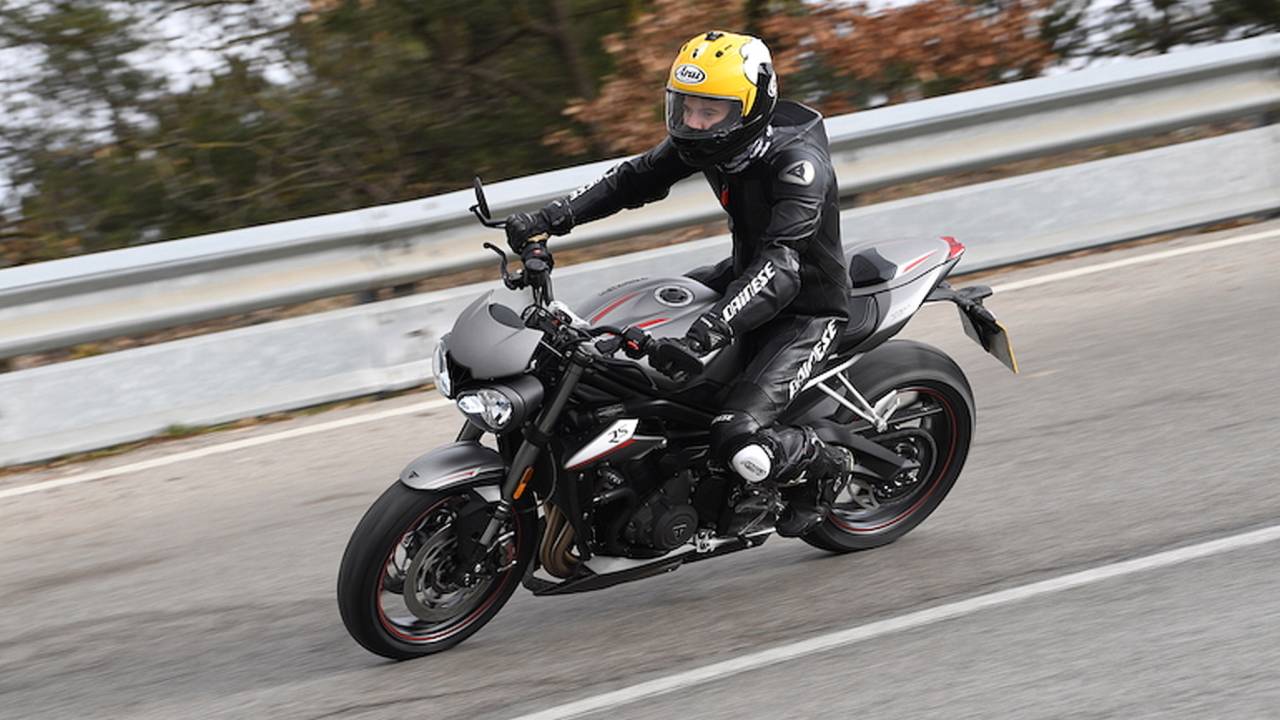 I feel like my motorcycling career grew up on that bike. I did everything from track days to jaunts in Europe to slicing through city traffic on my way to work, and it never once let me down. It's a bike that can do it all, and it should come as no surprise to anyone that Triumph has sold more than 50,000 units to date.

Like any successful model, the Street Triple received various tweaks and updates over the years. All of them were subtle rather than drastic. And the truth is, that's all the 675 ever needed; it was quite alright as it was. Triumph cleverly (and correctly) kept the competition at arm's length while winning group test after group test. Exhausts moved from under the seat to under the belly of the bike, mass was lost, and what had to be kept was optimally repositioned. A set of love-them-or-hate-them headlights appeared in 2011, but the overall recipe remained unchanged: a naked Daytona tuned for mid-range grunt rather than top-end punch. A masterclass in keeping it it simple, stupid. 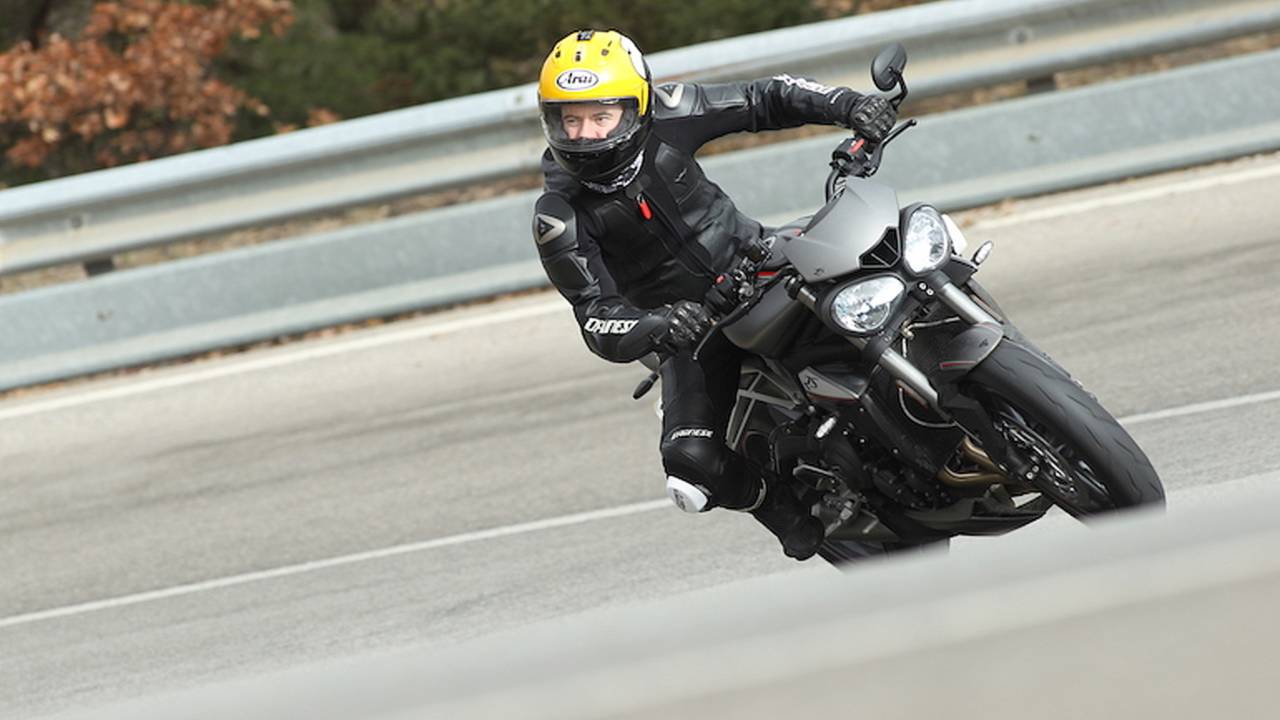 Arguably though, the Street Triple range had lost its shine somewhat in recent years. Yamaha brought out their aggressively priced MT-09/FZ-09 (also a triple with plenty of character), Ducati's Monster has only ever gotten more and more sexy, and then MV introduced their Brutale 800, an undeniably good-looking bike. Triumph responded with the "RX" variant of the Street Triple in 2014, and while it looked the part with its red cast wheels and rear sub frame, it wasn't much more than the seat unit from the Daytona 675 bolted to a Street Triple and a quick-shifter thrown in for good measure.

These competing models and the RX all added up to a growing sense that a new Street Triple was around the corner. Spy shots surfaced in early 2016 showing interesting, but clearly still in-development changes, along with an alleged customer research survey suggesting the line-up could increase from two to four different models, one of which being a semi-faired touring version (Wait. What?! Where's that bike?! Make this happen, Triumph! – Ed.).

Triumph put rumors to rest in January by throwing a launch party atop the Orbital in London. As it turns out, the rumor mill wasn’t entirely accurate, but it was close. Announced was the Triumph Street Triple 765 which comes in three flavors: S, R and RS. Each model increases in power output as well as electronic and mechanical sophistication. On paper, the 765 is clearly the most radical overhaul the Street Triple has ever had, but visually it’s recognisably a Street Triple in every way. Triumph called it a “game changer,” but is it?

Let’s start with the S model, effectively the base model in the range. It makes 110 horsepower, five more than the outgoing top-of-the-range 675 R, and comes fitted with an electronics package that offers two simple rider modes – road and rain – as well as switchable traction control. Brakes and suspension are a simple affair: sliding calipers, Showa forks, and an adjustable Showa rear shock unit.

The R, as you might expect, sits in the middle of the S and RS models. It gains five more horsepower and two more rider modes over the S model: sport and rider. Sport mode sharpens up throttle response, and Rider mode allows you to customize ABS and traction control levels. It also comes with fully adjustable Showa suspension front and rear, and radial Brembo M4.32 front brake calipers. The R also is the first model in the range to sport the 5-inch TFT display, but more on that later.

The RS is the top-of-the-range, full-fat, no-nonsense track-oriented model. It brags an extra 6 hp over the R model, topping out at 121 hp. There’s an extra engine mode over the R model - Track - which brings the total number of engine modes on the RS to five. Track mode allows ABS and traction control to be fully turned off. Triumph has also fitted an Ohlins shock to the rear, a quick shifter, shod the rims with sticky Pirelli Supercorsa SP rubber, and graced the forks with a set of Brembo M50 brake calipers. It’s quite the spec sheet. 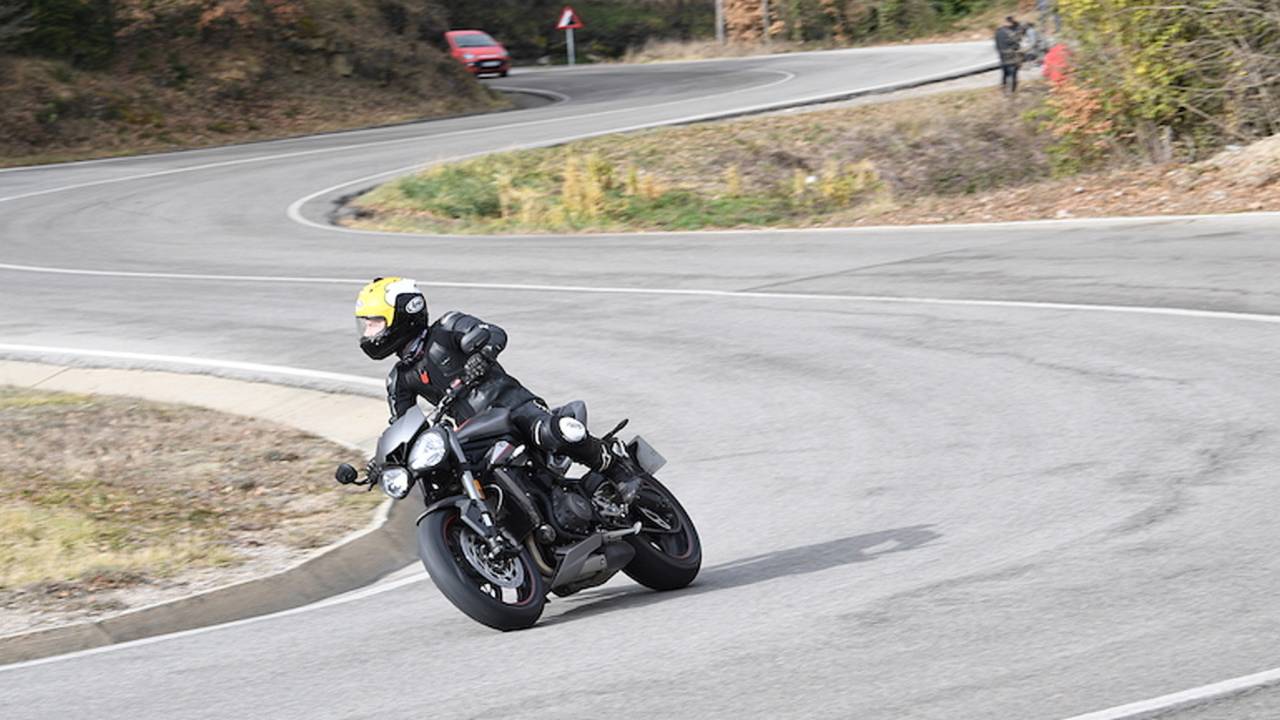 It’s worth noting that all three models feature a new "gullwing" swingarm design, which, according to Stuart Wood, Triumph’s head of engineering, helps with airflow and stability at the higher speeds the more powerful 765s can reach. They also all share the same motor, but the different power and torque outputs are achieved via different camshaft profiles and inlet trumpet lengths. Which, to you and me, means you can't buy an R and turn it into an RS just by flashing the ECU with a different map.

The 5-inch TFT display (on the R and RS) is big, clear and angle-adjustable without any tools. It has a high- and low-contrast mode, and will switch between the two automatically as ambient light conditions change. There’s no less than 18 different modes, which I personally found to be way too many. They’re all fairly similar, so I chose a mode and stuck with it. In Track mode, the display was trying to prioritize speed and revs, whereas the only thing I want to know on a track is RPM and what gear the bike is in. The display is controlled via a 5-axis joystick, which is operated with your left thumb. I think it’s fair to say that this is very obviously Triumph’s first attempt at a rich TFT display system; no doubt there will be software updates available in the future. I fully expect the 18 subtly different modes to be thinned down to a less bewildering array of choices. The S model receives the analogue clocks from the Speed Triple 1050 and the TFT display is not an available upgrade. 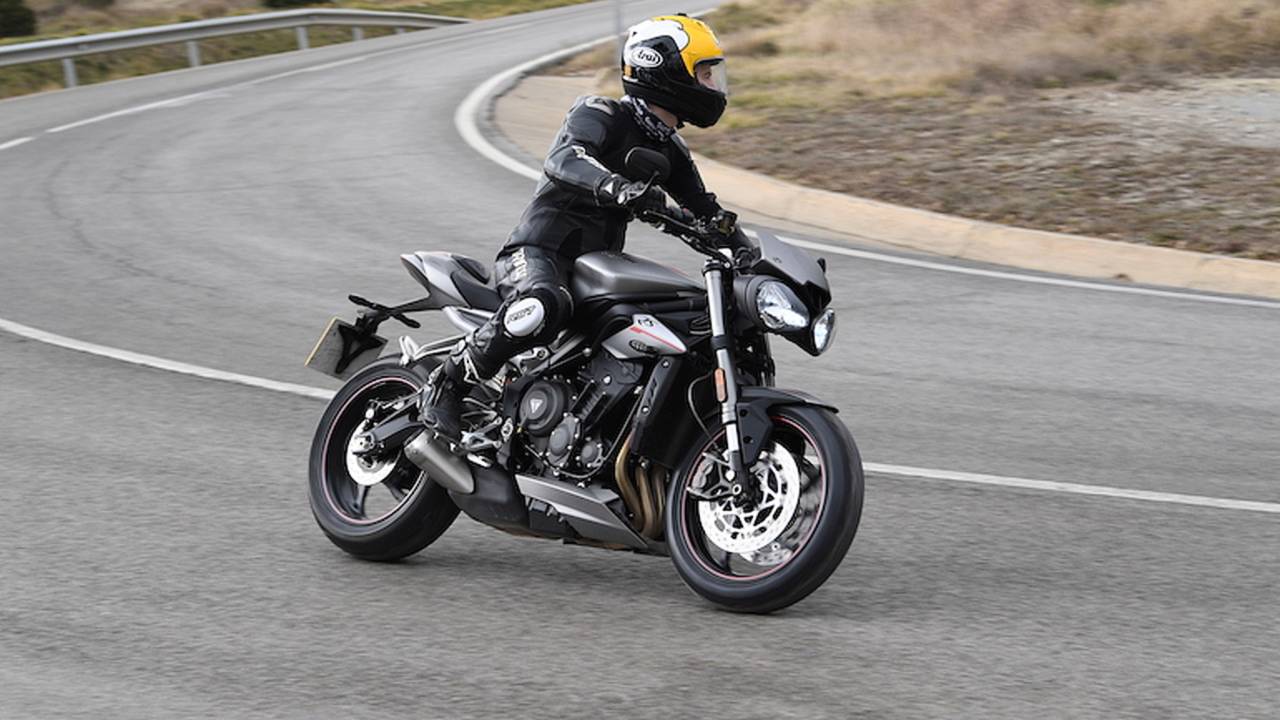 Given the all-out nature of the RS model and the recent link between Triumph and Moto2, Triumph saw fit to host a day's worth of riding at Circuit de Catalunya and on the roads north of Barcelona.

We set out at roughly 9am on a cool, misty, and slightly damp Monday morning onto the mountain roads north of Barcelona. The sticky Supercorsa SP tires were vague and uncommunicative in these conditions and keeping heat in them was a challenge.

But competing for my attention was the sound the 765 makes. It’s simply gorgeous. Triumph say it’s deeper and richer than the 675, and they’re not wrong. I found myself taking stabs at the throttle just to get yet another dose of the induction roar.

The traction control system in Road mode made its presence more than known in the damp and cool conditions, with plenty of interruptions as power was asked for on the way out of corners and even upright in a straight line. However, as the morning went on, with temperatures climbing and damp patches disappearing, they began to make a bit more sense. Likewise, the road conditions also highlighted the ABS system, which was eager to step in whenever it deemed necessary. I found both traction control and ABS too eager in Road mode for spirited riding; Sport mode was much more appropriate. The assist clutch was welcome and much lighter than the outgoing 675s, with plenty of feel through the lever. 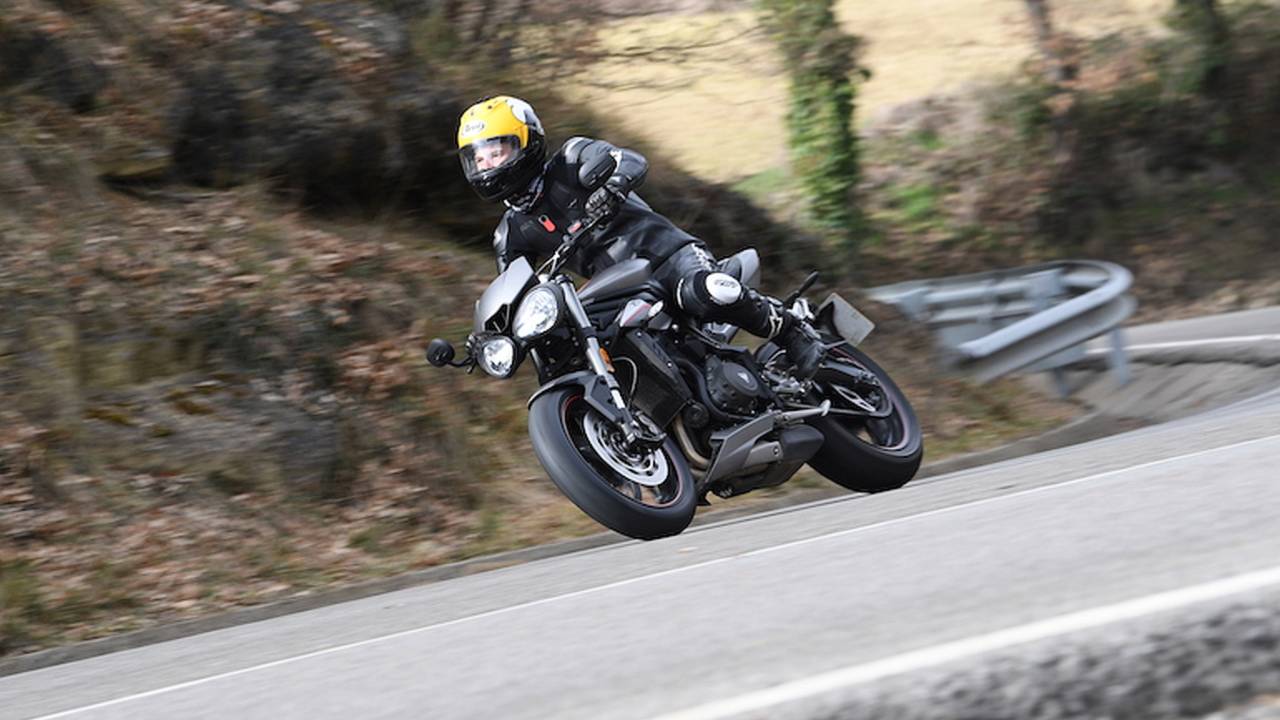 After 60 or so miles on the roads we arrived at Circuit de Catalunya where rain clouds were threatening. As tire warmers were thrown on and suspension fettled to stiffen things up for the full GP track layout, I took a few minutes to get a closer look at the fit and finish of the 765. Triumph claims it's their "best ever," and I'm inclined to agree. There are plenty of details from every angle reminding you that this is a Triumph Street Triple 765 RS – they're clearly very proud of it.

On the first track session it didn’t take long to discover where exactly the RS develops all its power. It lies right at the very top top of the rev range. This leaves it feeling a little lacklustre on the road but on track it suddenly clicks and makes a lot more sense. Below about 8,000 rpm the engine is often playing a game of catch-up with the throttle – an unfamiliar feeling for anyone used to a 675 – but all of that goes away on track where being able to use all the available revs transforms the RS into the bike it's supposed to be. The Brembo M50 brakes also start to justify their existence here. They’re borderline too powerful for the road, with the initial bite being incredibly strong, but they’re a necessary addition when you’re trying to scrub the speed off while heading toward turn one at Circuit de Catalunya. 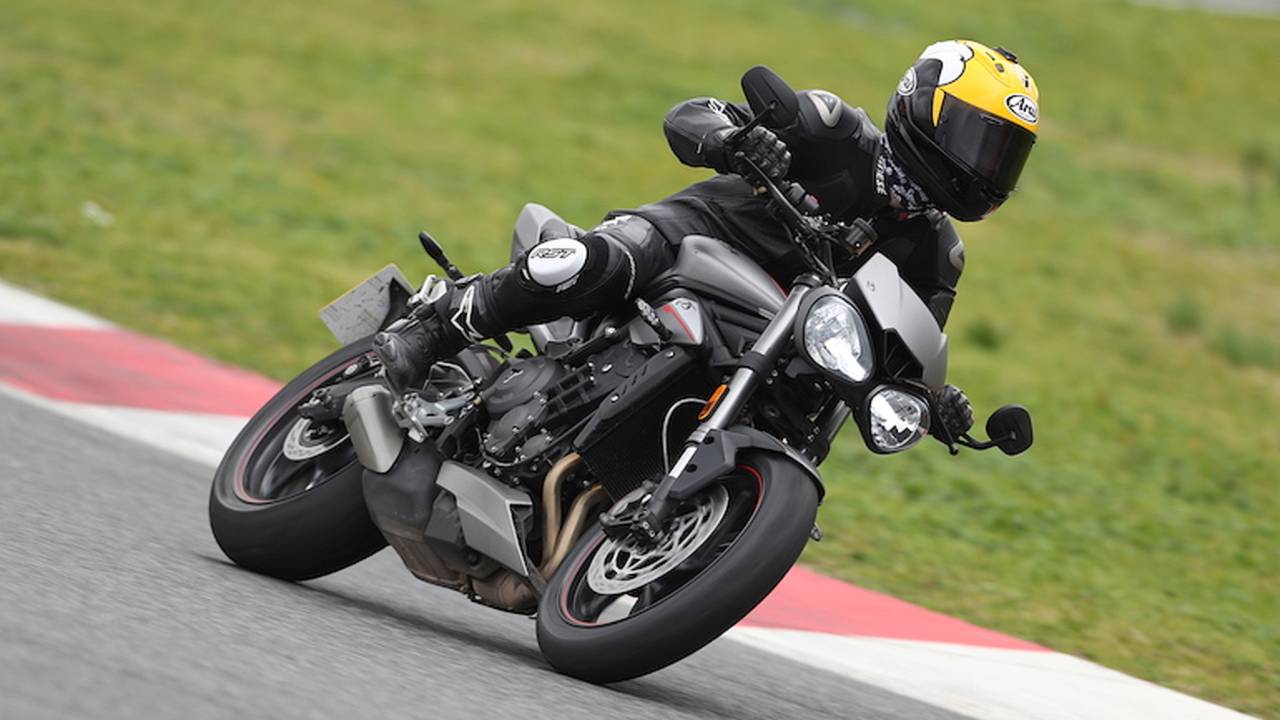 The RS's Ohlins shock and Showa separate-function big-piston forks make a great job of fast sweeping corners and the slightly elongated chassis deals nicely with the increase in power over the previous model. The swingarm pivot has been moved up by 4mm, which puts the RS on its nose slightly more, making for a great feeling on corner entry. The slipper clutch, clearly a quality piece of kit, kept the rear end nicely settled as I changed down the gearbox while braking into corners, but it was also useful on the road. The quick shifter worked well, and while it’s not the best quick shifter I’ve ever experienced (and it only works on up-shifts) it didn’t miss any gears and worked better than expected at low revs.

If you study the power and torque graphs for all three models, I think most would agree the R is quite obviously the pick of the bunch for the real world. It makes more power and torque than the RS right up until 10,250 rpm, at which point the RS speeds ahead, but when are you routinely using over 10,000 rpm on the road? The R also comes fitted with Pirelli Rosso Corsa which are much better suited for road work - I would not want to be caught on the cold and damp roads of the United Kingdom, where I live, on the Supercorsa SPs fitted to the RS, and I would advise anyone who does buy an RS to change the tires as soon as possible, preferably before leaving the show room. RideApart readers in drier parts of the world may not need to make a change as urgently, but once you've worn these out, don't buy a new set. 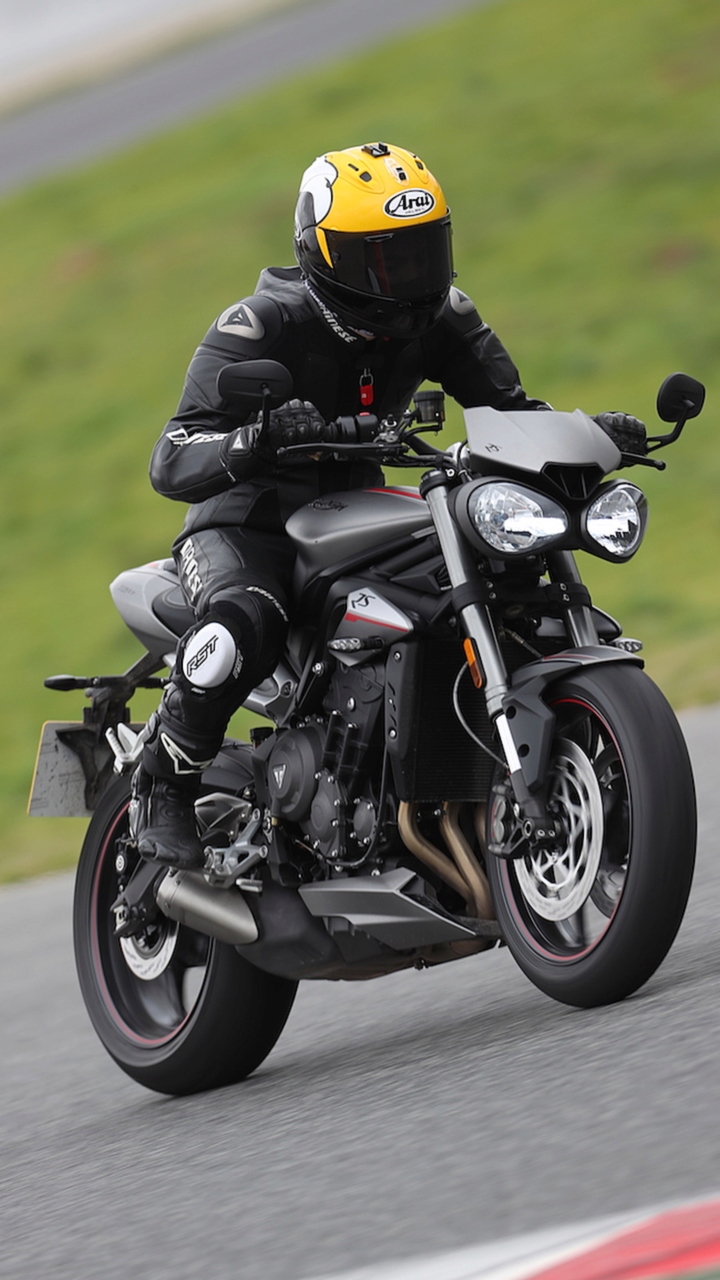 So, is the 765 the game changer Triumph promised? I think not. For that to be the case, it would need semi-active suspension and a quick-shifter capable of changing down the gearbox as well as up. But don't let that put you off. It is a very fine motorcycle indeed, and undoubtedly the best Street Triple to date.

By: Randle McMurphy
++
++
Got a tip for us? Email: tips@rideapart.com