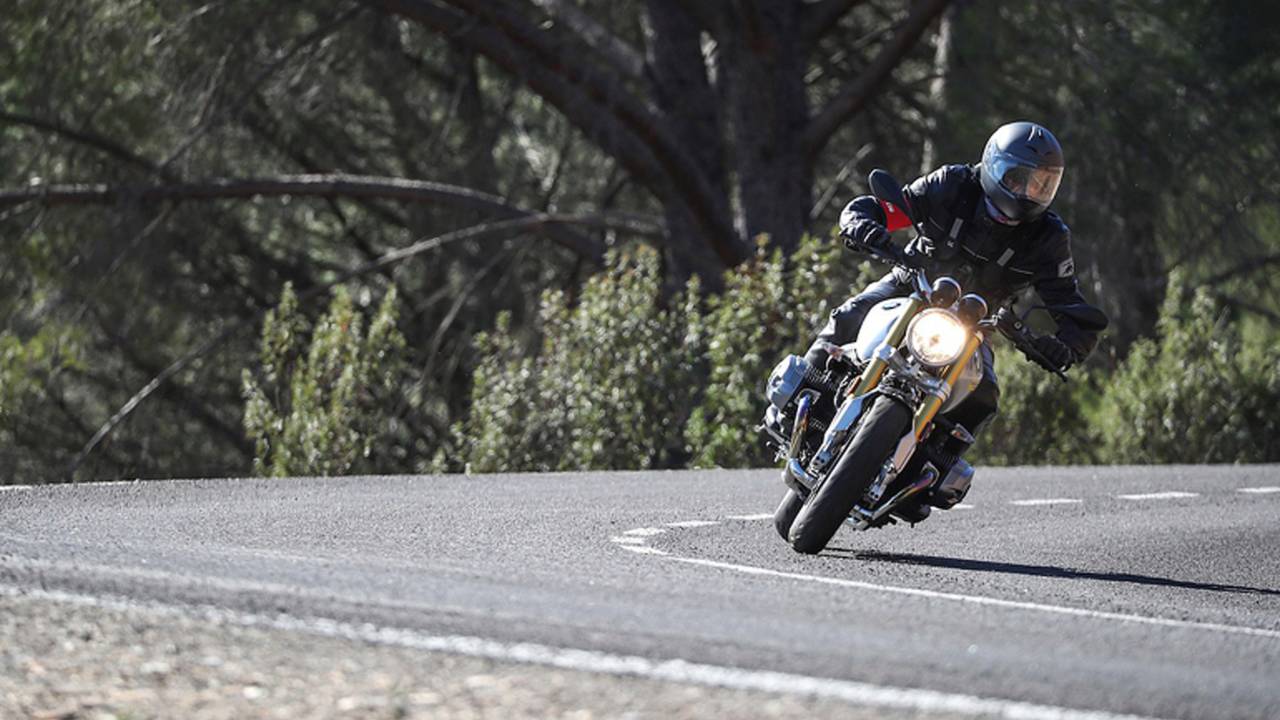 Wildly fun modern classic manages to live up to the hype.

We were both riding R nineTs as part of the launch for Michelin's Road 5 tire (side note: good tires, y'all). The R nineT was first introduced to the world back in 2013 and hasn't changed much since then, but up until now I’d never had a chance to ride one because the popularity of the bike meant press models weren’t available. Why bother to give journos a bike they might wreck when you’re selling so many you can’t keep up with demand?

Unruly and ill-tempered but so much fun.

Now that I finally have ridden the 1170cc air-cooled, boxer-driven, Bavarian retro machine, I feel pangs of sadness for all the time in which I was not riding it. Over the years, I’m sure you will have read review after review in which the author was falling over him- or herself to heap praise upon the bike. I tend to take that sort of thing with a big grain of salt, but, mis amigos, I can assure you they were right about this one.

That’s kind of a funny thing to say though, because the bike is somewhat unruly. In an age of assist and slipper clutches, quickshifters, and such, the R nineT eschews most of that (although, ABS is standard, and these days you can get traction control as an accessory) and it will get unsettled if your riding is sloppy. On paper, it doesn’t come out looking the best. Along with its somewhat unrefined nature and lack of electronics, the bike’s engine produces “only” 110 horsepower, which is a little low for a BMW. Then you look at the bike’s price tag ($15,495) and you think: “Wait. What??”

But as I’ve learned over the past few years in changing my opinions of Harley-Davidson bikes, you don’t ride paper. Numbers don’t tell the whole story—especially with a bike like this, which is so engaging and so much fun.

The R nineT is much, much more than the sum of its parts or its build sheet.

The very first thing to love about the R nineT, of course, is its appearance. It definitely has the look of being from another time, but also manages to be modern and relevant. There are styling hints of BMWs from the mid 20th century but this isn’t a slavish adherence to old-school aesthetic. It’s not copying anything, it’s not trying to look like something else. It’s just its own beautiful thing.

Throw a leg over and the lanky guy or gal may initially feel things are a bit on the small side. That’s because they are—sort of. Certainly this isn’t really a bike for carrying passengers. As is the case with almost all bikes, the clever chap or chapette may be able to transform it into a world-crossing grunt, but most riders aren’t going to see it as a long-haul machine.

However, sit there for a moment and you’ll start to change your mind about how long you want to be in the saddle. It’s actually comfortable. Really comfortable. Everything is just right: your shoulders are relaxed, your knees bent agreeably. Your body is bent forward just enough that you won’t turn into a sail above 60 mph, but you remain upright enough to handle long slogs filtering through urban gridlock.

Start up the bike and the power of its somewhat agricultural twin rocks the whole show to the right. Blending with the sound of your involuntary gleeful shouting, the exhaust has a raw, visceral note. It won’t upset the neighbors—this is still a BMW—but the growl is enough to make you want to sit there, grinning at the sound and shake of the engine.

The famous boxer engine can divide opinion somewhat. There was a time, of course, when BMW itself was eager to get rid of it, feeling it lacked the precision for which the company sought to be known. Its fans refused to let go, however. Thank goodness. I’m inclined to believe they were—and still are—right to hold the engine so dear.

I loved it from the very first twist of throttle. You’ll have to like the feeling of a twin engine to like the R nineT. Fans of big V-twin bikes in particular will get it. There is a thrumming sense of power that always reminds you of the fact you are sitting on a metal box full of explosions. As I say, there is an agricultural sense to this older, air-cooled version of the boxer. Yes, it does feel a little like a tractor but remember the old adage: tractors are awesome.

Power delivery is relatively smooth, but if you crack the throttle out of corner you can get the bike to kick slightly to the right from the amount of power being sent to the back wheel. Looking at a stats sheet after my ride I was surprised by the bike’s 110 hp figure—I would have thought there was more. It wasn’t as ultra-springy as, say, a Triumph Speed Triple, but I certainly didn’t feel anything was lacking.

The R nineT’s transmission has an equally agricultural feel, but clicking up and down the gears is easy enough. Clutchless upshifts are possible but require a teency bit more rider skill. My everyday ride, a Triumph Tiger Explorer, has spoiled me, so I got it wrong a few times. To that end, the bike will punish you for banging down the gears too quickly. Downshift without matching revs properly and the back will kick—the shaft drive hitting you with the sort of good ol’ fashioned shaft jacking your dad used to complain about.

It may be a tractor, but it's a fast and sexy one.

This is what I mean by unruly. It’s the sort of behavior you’ll want to learn to control before riding in a downpour, but on dry pavement there is something hilariously fun about it—wringing the thing for all its worth and having it kick and shudder like a not yet fully broken horse.

I’ve spent time with the modern iteration of the boxer engine in its guise as the powerplant of a R 1200 GS and enjoyed it, but this was infinitely more engaging. I can see why some old BMW guys are so religious about their bikes.

A Joy Through Corners

Perhaps the reason the engine’s… ah… character struck me as good fun, rather than a pain in the ass, is the fact the bike’s chassis and suspension is thoroughly modern. You’re able to use all that wild, snarling power to zip through twisting roads with ease.

The R nineT carves through corners with ease.

The engine’s low weight helps keep the bike feeling light and flickable, once again contrasting the impression you might get from a stats sheet (490 pounds wet). The bike flows through corners. Despite the raw feel of the boxer twin, the throttle is smooth and reliable—so, once you acclimate to the idiosyncrasies of the overall package you can rely on it. Everything feels natural, almost physical—as if you are working in concert with a living creature rather than a machine.

The brakes are equally modern, no need to worry about idiosyncrasies here. Four-piston Brembos expertly grip the bike’s two front discs, while a two-piston set-up handles the rear. ABS is standard but beyond that, as I say, there are very few bells and whistles. When a manufacturer lists the seat among the standard items (31.7-inch seat height, by the way) you know it’s going to be a pretty no-frills moto.

That’s not to say there isn’t an extensive accessories catalog however. From the get-go, BMW has hoped the R nineT would inspire customization and put together a laundry list of billeted this and machined that to help you make the bike a little bit more your own. Personally, I don’t see the point of all that. Indeed, if I were in the market for an R nineT, I might look to save a few thousand by opting for the R nineT Pure—basically the same bike as the R nineT with fewer premium bits.

The R nineT Pure looks pretty much like the R nineT, but costs less.

One day, I may very well be in the market for this bike. I have always been a fan of the R nineT because of its aesthetic, but actually riding the thing has turned me into a true believer. I now get why BMW guys are rivaled only by Harley guys in their over-the-top dedication to brand: because they have reason to be.

If you’re a person like me, you might read descriptions of the R nineT and think: “No, I don’t want a bike like that, because of reasons A, B, and C. This is not for me.” If you get on one though, I’m willing to bet you’ll change your mind. Unrefined in engine performance and beautiful in all other ways, the R nineT might turn out to be very much your kind of thing.

Raw and unrefined by BMW standards, the R nineT is like something from another era.