Defunct Bike Maker Phelon And Moore To Be Memorialized In Yorkshire

A home goods store now stands where Panthers once prowled.

Yorkshire, England, is internationally beloved for some important reasons in 2021. Yorkshire pudding, Sir Patrick Stewart, and Yorkshire Tea are all thought of fondly by many people who’ve never set foot there. However, even many motorcycle history enthusiasts aren’t familiar with early 20th century OEM Phelon & Moore, which was also Yorkshire born and bred. Now, two local groups want to make sure that although the company is long gone, it’s never forgotten.

That’s why the Spen Valley Civic Society and the [Phelon & Moore] Panther Owners Club banded together to create an information board about the company. Very soon, it will be installed in the Home Bargains store in the town of Cleckheaton, West Yorkshire. That home goods store now sits where a Phelon & Moore motorcycle factory was once located in the early 1900s.

Back in 2017, Director Jason’s buddy Todd (who is, coincidentally, an ace Britbike mechanic) schooled us all on the history of Phelon & Moore’s most famous creation, the Panther. Now, the most important thing to realize about diving into any era of motorcycle history is that context is everything. What may seem like old hat to us on our lofty technological perches in 2021 was, at some point in the past, new and exciting. The Panther’s advertising dubbed that model “the Perfected Motorcycle,” because at the time, it was. 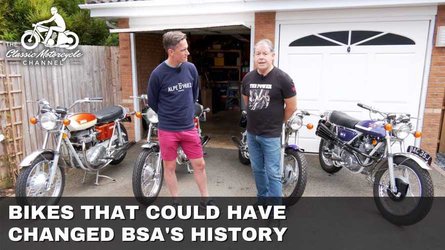 The BSA Power Pack: A History That Nearly Was
⠀ 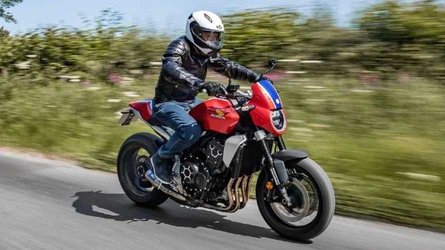 In 1904, some people were just itching to get rid of bicycle pedals on their motorbikes, and company founder Joah (no “n”) Carver Phelon was one of them. Once he partnered with engineer Richard Moore, who had recently developed an extremely exciting new two-speed transmission for motorcycles, the rest was history.

During WWI, more than 9,000 Phelon & Moore bikes helped equip Britain’s Royal Air Force, as well as the Army. Civilians liked them as well, both during and after the war. Pretty soon, people from all walks of life were using Panthers for all kinds of daily activities. Panthers even raced in the Isle of Man TT in the ‘20s. Interestingly, the big single’s character worked particularly well with sidecars—and that’s how it’s most fondly remembered today.

Phelon & Moore Panthers weren’t only sold in the U.K., and were also exported overseas. Unfortunately, the company did not get any wartime contracts during WWII, and it never fully recovered from that blow.

Still, P&M continued to iterate on the basic Panther premise through the 1950s. However, the advent of small automobiles like the epically British Mini made people seemingly forget they loved sidecars almost overnight. By 1962, Phelon & Moore went into receivership, and by 1966, the company was no mo(o)re.

Throughout its entire 60-plus years of existence, Phelon & Moore remained true to its Yorkshire roots. Members of the Spen Valley Civic Society and Panther Owners Club didn’t want that history to be forgotten, like so many other marques that have fallen by the wayside throughout time.

The board is planned to be unveiled at a special ceremony at the Home Bargains in Cleckheaton, West Yorkshire at 1 p.m. local time on September 5, 2021. Members of the public are welcome to attend, and should park in the large car park next to Cleckheaton Town Hall if they do.

Source: The Telegraph and Argus