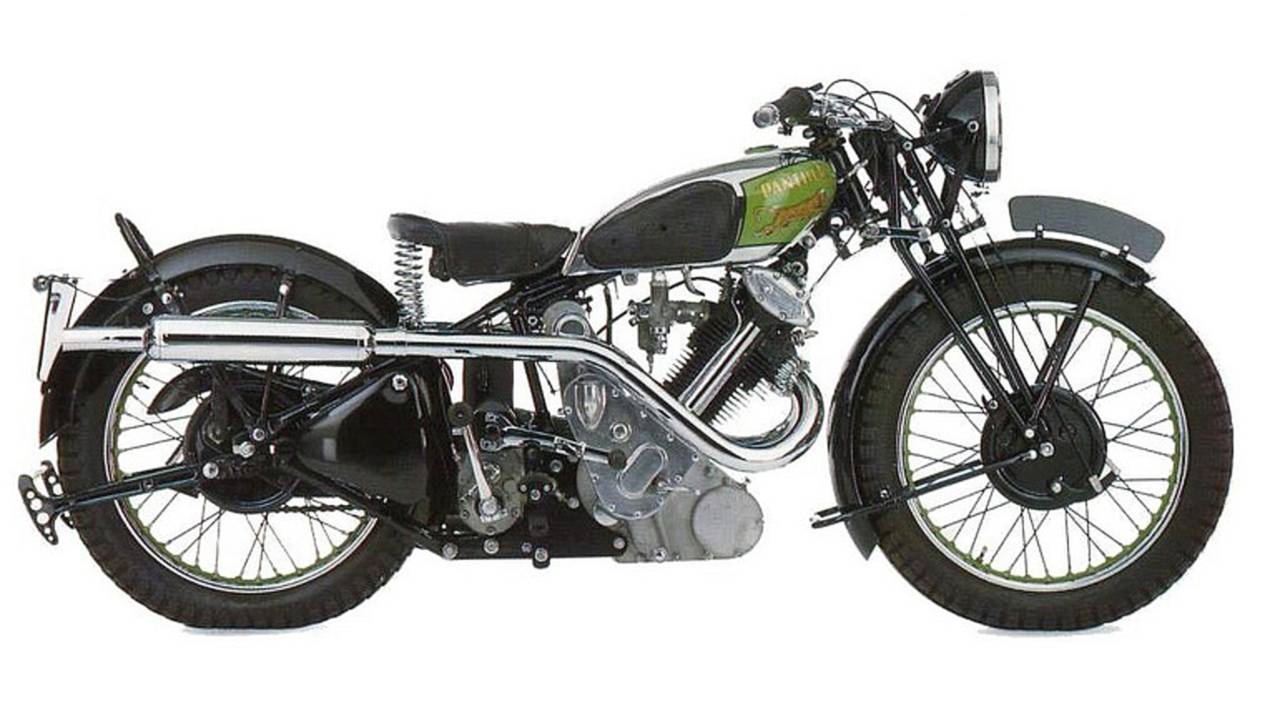 The perfect motorcycle from the perfect place – Yorkshire!

Friends, today on Cycleweird we're going to do something a little different. I've asked my good friend Todd to tell us about one of his favorite bikes, the Panther. Todd's an ace Britbike mechanic here in the Detroit Metro area, and always has a pretty fascinating collection of Beezers, Triumphs, Nortons, and other weird oddments of British iron around his garage. He's also done a bit of motorcycle writing here and there, so I thought, who better to tell us about a super obscure, very cool Britbike from Yorkshire? So, without further ado, let's sit back and listen to the story of the Phelon and Moore Panther. -J

I’m fortunate, in my work I get to ride a lot of old motorcycles, some of them really old. The average age in the stable is fifty years. Some are much older. I also get to ride modern bikes, like the recently discussed and mostly perfect Suzuki SV650. For Luddites like me, the modern SV is perfect. It does everything well with almost no effort, minimal upkeep, and solid reliability. Each generation of riders seeks that “perfect” motorcycle. A bike that is affordable, fast, goes anywhere, and never breaks. For over 40 years the “Perfected Motorcycle”, according their own advertisements, was Phelon and Moore’s Panther. So what makes the Panther a perfect motorcycle? We’ll need to turn the clock back to 1895, in Yorkshire, England, where a young engineer named Joah Phelon pondered the very idea of a “perfected motorcycle.”

A shot of the Phelon and Moore factory in Yorkshire

Phelon's ideas were pretty radical for the time. Rejected immediately were the conventions of simple clip-on engines with bicycle frames, numerous awkward controls, leather belt drives, and the infamous “light pedaling assistance required on hills.” By 1902, Phelon had a design that featured chain drive, simple controls, and most revolutionary, an open frame using the motor, sloped steeply forward to replace the down tube, as a stressed member. Some consider this bike, manufactured by the Humber Company, to be the first fully developed motorcycle rather than a self-propelled bicycle.

In 1904, eager to produce his own motorcycle and get rid of those bicycle pedals, Phelon teamed up with another Yorkshireman named Richard Moore to form Phelon and Moore Motorcycles. The innovations continued with two speed transmissions, magneto ignition, pillion seating, a kick starter, and the distinctive sloping motor that became the Panther trademark. Prosperous years followed, and P&M gained both racing success and a reputation for unbreakable technology. Lucrative wartime contracts for their durable motorcycles poured in as World War I began. 1918-era cycle magazines claimed, “motorcycle perfection is here,” and P&M quickly adopted “The Perfected Motorcycle” in all advertising.  Innovations continued with automatic lubrication, and a pioneering four-speed transmission, at a time when most bikes were still single speeders. All this excitement arrived just in time for a massive worldwide downturn in motorcycle sales. This difficult time inspired Phelon and Moore’s most successful model, a single bike that would carry the brand for the next forty plus years.

The Panther Sporting Motorcycle, announced in 1923, featured a 4.5 horsepower, 555cc, single cylinder mill mated to a new and revolutionary, for the time, four-speed synchronized transmission. The previous four-speed had two gears operated by foot, while other two were shifted by hand. How riders figured out what gear they were in, I can’t imagine.

Not comfortable resting on their laurels, P&M commissioned a revolutionary design by the noted – and slightly troubled – aircraft engineer Granville Bradshaw. Bradshaw’s engine was the Hayabusa of the day – fast, clean, reliable, yet easy enough for mere mortals to maintain. All components were accessible and fully up to date, with no wild unproven technology to confound the hapless buyer. The clean part is very important as 1920’s motorcycles spew oil from everywhere, attract road dirt, and spoil your finest Sunday tweeds.

Non one really knows where the name “Panther” originated, although there is general agreement that pioneering motojournalist Ixion was fond of describing Phelon and Moore machines as having “cat like qualities.” The name stuck until the end in 1966.

The RAF loved their Panthers

Bradshaw’s engine was a revelation of smoothness, reliability, oil control, power, and easy maintenance with a claim of easy 70 mile-per-hour cruising with minimal vibration. (I sometimes wonder about that claim as my own 1964 Panther, representing the pinnacle of Bradshaw’s design, is not at all happy at 70 MPH. Maybe riders were made of sterner stuff in 1925?) (They almost certainly were, what with the jockey shifters and total loss oiling and manual oil pumps -Ed.) The Panther was an almost overnight success. Sporting riders liked them, the police liked them, the Royal Air Force liked them, and Phelon and Moore moved into the golden age of British motorcycle innovation in very good standing. Things went a bit haywire with the 1929 market crash, but improvements continued and reliability was always a strong selling point. A series of smaller cheaper bikes were offered to keep the company going, but the use of women (who were paid less than men) and other non-union laborers created a social backlash that harmed the brand.

The Panther was considered a well built, thoroughbred machine. Adventure riders Florence Blenkiron and Theresa Wallach set out in 1935 from Boulogne, France, to Cape Town, South Africa, on a Panther and sidecar outfit, a story is recorded in their book "The Long Way Around". Theresa, bored after the trip, became a qualified engineer and overcame major sexism to manage important programs during the war. She arrived in the USA in 1946 and toured another 14,000 miles on her new BSA.

Blenkiron, Wallach, and their trusty Panther with friends

World War II did not bring lucrative motorcycle contracts to the company, sadly. Instead, P&M were relegated to producing ordinary war materiel including shell casings and components for other vehicles. Like other motorcycle companies that did not produce actual motorcycles for the war, P&M transitioned into peace so desperately underfunded that they never recovered. It’s been suggested that P&M’s dismal war contracts were political pay back for their dubious labor practices during the depression. Numerous new product ideas were not funded, and the stalwart 600cc Panther soldiered on nearly unchanged, still popular but now 20 years old. One innovation, the Dowty Air Fork eliminated fork springs and provided true progressive suspension, an impressive innovation in an era when the telescopic fork was still considered crazy and new by most bike manufacturers.

After the war, New York importers York Motors and the American Motorcycle Company in California were recruited to sell Panthers in the United States. Customers were eligible for an unbeatable offer – Buy a Panther and the AMC will pay for your passage over to pick up your Panther at Phelon and Moore Limited, London, England. Buyers got a one-way tourist class voucher on the Queen Mary or the new Queen Elizabeth. How you got home with your new bike was apparently your problem.

Sales remained steady over the next decade, but twins were quickly taking over and the Panther was seriously dated. New 250 and 350cc vertical engined derivatives received good reviews but were not strong sellers. The mighty 600cc Model 100 was the favorite of sidecar riders thanks to strong architecture and a torquey engine perfectly suited to pulling a chair.

Sweden offered a solid export market and, to get around tax and import headaches, complete bikes were sent in kit form and sold as “Svalan” motorcycles. The 250 and 350cc bikes had success in off road trials. But the big Panther had become the boring commuter bike that everyone relies on, and no one gets excited about. What was once a Hayabusa was now an SV650.

The Panther 600 still held the sidecar market though, and one of every three new Panthers were registered as sidecars. The final development of this seriously old design was the Panther model 120, which featured the beefy 600cc motor bored and stroked 650ccs. This version, even more tractorlike than its predecessor, was a fine sidecar workhorse and able (just) to stay with slower traffic on newly invented expressways.

By 1960, the era of the big single was over and the BMC Mini automobile erased the commuter sidecar market almost overnight. The company went into receivership in 1962, and by 1967 it was producing only two models – a single and a twin. Production ceased in 1968, and the perfect motorcycle was, sadly, no more.

So what is it like to ride the "Perfected Motorcycle"?  Well, by 1925 standards, it is a very good motorcycle. Ride anything else from that period and the Panther stands out like a rocket ship from the distant future. For a hulking 650 single, it’s easy to fire up and the Panther rule is simple, a Panther should always run and if it runs, it will stay running. However, we have a 1920’s design, the port shape plays hell with gas flow and 25 horsepower at a 4500 red line are not impressive. The good news, those 25 ponies are actually more like Clydesdale horses and 55 mph comes up pretty quickly. No, there isn’t a lot more.   This Edwardian Hayabusa feels like a heavy, slow, learner bike. The Panther is, however, very easy to ride and is absolutely forgiving.

The basic design is pushing 90 years old, but Panthers are still being used as long distance bikes and featured in books. In 2007, two seventy somethings, Des Molloy and Dick Huurdman from Australia decided to go to a family wedding in Amsterdam. They went via Mongolia on a Panther and an equally old Norton 600 single. Their saga is available in the book, The Last Hurrah.  A chronicle of two men, aging, but their bikes are not.  So, a lucky example of this “Perfected Motorcycle,” (production was never large) sits in my shop ready to take on the 21st century. If I can only sort out the rather imperfect clutch.