Dax to the future.

Back in December, 2020, rumors started circulating that Honda, in its infinite wisdom, was about to revive the Dax. It wasn’t just idle chatter, either, since Honda filed trademark applications with both the U.S. Patent and Trademark Office and the European Intellectual Property Office for the designations “Trailsport” and “ST125”. Since both the Trailsport and ST marks originated with the OG Dax back in the ‘70s, it’s not hard to see why fans got excited.

It’s now April, 2021, and while we don’t have much more than some renderings from Young Machine of what a modern Dax might look like, there are always restoration videos. In this case, YouTuber Restoration of Everything took a Dax 100 that looked absolutely thrashed, then lovingly restomodded it into a sweet, very modern-looking machine. The channel is based in Sri Lanka, if you’re curious about the license plates you’ll see on the stack of bikes he rescues the Dax from toward the beginning.

Although the exterior looks a bit rough, and very much like it’s seen better days, the bike is overall in pretty solid shape. No major rust anywhere, and even though that single-cylinder Super Cub engine is a bit crusty, it’s still in pretty decent shape, as well. The RoE guys separated the engine rebuild into a different video, but the build ethos is the same in both parts. Take everything apart, clean it up, replace consumables like gaskets, bearings, springs, clutch pack, timing chain, and everything else that you know deep down should be replaced. Pretty simple, and so satisfying to see everything laid out and neatly organized as he goes.

(Re)Build All The Things: 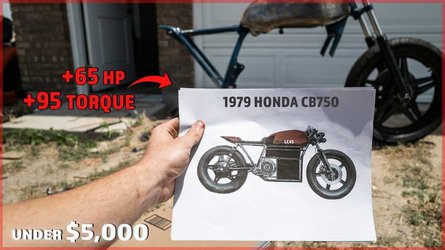 Watch This Guy Build An Electric Cafe Racer From Scratch
⠀ 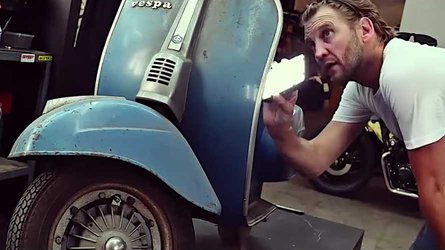 Watch A 30-Year-Old Vespa Clean Up Like A Charm

While RoE appears to keep the engine pretty stock, the main mods are primarily cosmetic. There’s a new saddle that looks infinitely more comfortable than the original one, even back when it was new. The tank has a pleasingly modern, squared-off look to it, which is aided in large part by the graphic design he applies to the side.

My favorite part, though, is probably watching the guy carefully build exactly the high-mount exhaust he wants to fit. Piece by piece, he carefully cuts, files, welds, and assembles the pieces so it all fits together perfectly. The finished look, with the pleasantly rainbowed exhaust can against the glossy black Dax is extremely pleasing to behold.

Will Honda revive the Dax? I’m not so sure it matters if people like Restoration of Everything have their way with some of the old ones.