A carbon-neutral vehicle is the white rabbit of the automotive and motorcycling industry at the moment. While electric vehicles reduce the user’s carbon footprint, electrical infrastructures still rely (in part) on old energy sources. But what if an EV could offset those indirect emissions by cleaning the air around it? That’s the question that Taiwanese designer Lin Yu Cheng set out to answer with his Aether electric motorcycle concept.

The futuristic design features two gaping air intakes positioned in front of the rider’s legs. Ceramic filter modules filter out PM 2.5 microparticles, resulting in cleaner air streaming out of the exhaust ports. Once each module is full, users could wash them out or swap in new filters. While the design seems very ambitious, air cleaners equipped on current internal combustion engines operate the same way. Instead of supplying that cleaner air to the combustion chamber, however, Cheng’s system would return it to the environment.

Of course, the large panels would negatively impact aerodynamics, range, and weight, but that doesn’t make it an entirely bad idea. Aside from being a two-wheeled air purifier, the Aether concept hopes to pioneer wireless electric vehicle charging. With two wireless charge boards mounted to the underbelly of the angular roadster, Cheng hopes the motorcycle could park in a wireless charging-equipped parking spot and fully charge in 30 minutes. Now, the infrastructure for such technology isn’t available yet, but we can’t fault Cheng for dreaming.

Aside from its pie-in-the-sky qualities, the Aether concept does capture some recognizable design elements. The aggressive/uncomfortable ergonomics and nose-dive stance are mighty reminiscent of BMW’s E-Boxer while the body panels remind us of Tesla’s Cybertruck on two wheels. The final chain drive and rear monoshock are commonplace these days, but the USD forks look like they might suffer some rigidity/flex issues thanks to the wedge shape.

We doubt we’ll see Cheng’s proposals realized in the near future (if at all), but the Aether concept is an exploration of the electric vehicle’s potential. After all, we have to dream big if we ever expect to catch that white rabbit. 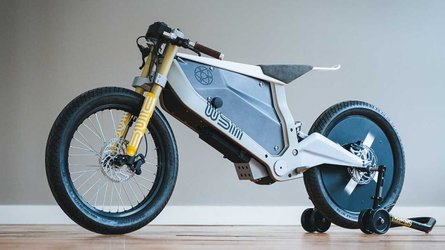 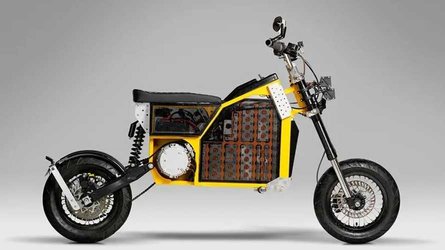