Proof that this bike is one capable beast.

A lot of people simply don't understand the rigors—both mechanically and physically—that off-road riding bestows upon man and machine. Indeed, mastering the art of traversing where there are no roads takes incredible skill and bravery, which are developed through years of training. Pro riders are just like olympic athletes, and they undergo extensive training and maintain an intense diet to remain on top of their game.

It's with all this hard work that amazing feats like the one we're going to talk about today are achieved. Ashish Raorane is a Pro Moto XC Athlete based in India. Aboard the KTM 390 Adventure, he recently set a new record on what is considered as the world's highest hill climb challenge—a grueling 12.5-kilometer pass from Batal to Kunzum La. In total, the mountain pass has twenty hairpin turns, a total elevation gain of 551 meters, and an average temperature of 23 degrees Fahrenheit (-5 degrees C). Ashish went head-to-head with 11-time Raid de Himalaya champion, Suresh Rana, who was piloting his Rally-spec race car.

It's pretty interesting to note that what is considered by many as a beginner-friendly motorcycle has proven itself capable of achieving such an impressive record. The KTM 390 Adventure is powered by the same engine as the 390 Duke, and comes equipped with premium WP Suspension. This extremely capable adventurer is available for just $6,200 USD. 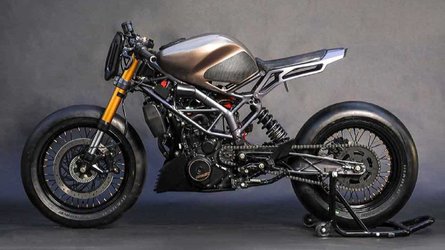 This Retro-Styled Custom KTM 390 Duke Is Ready To Race