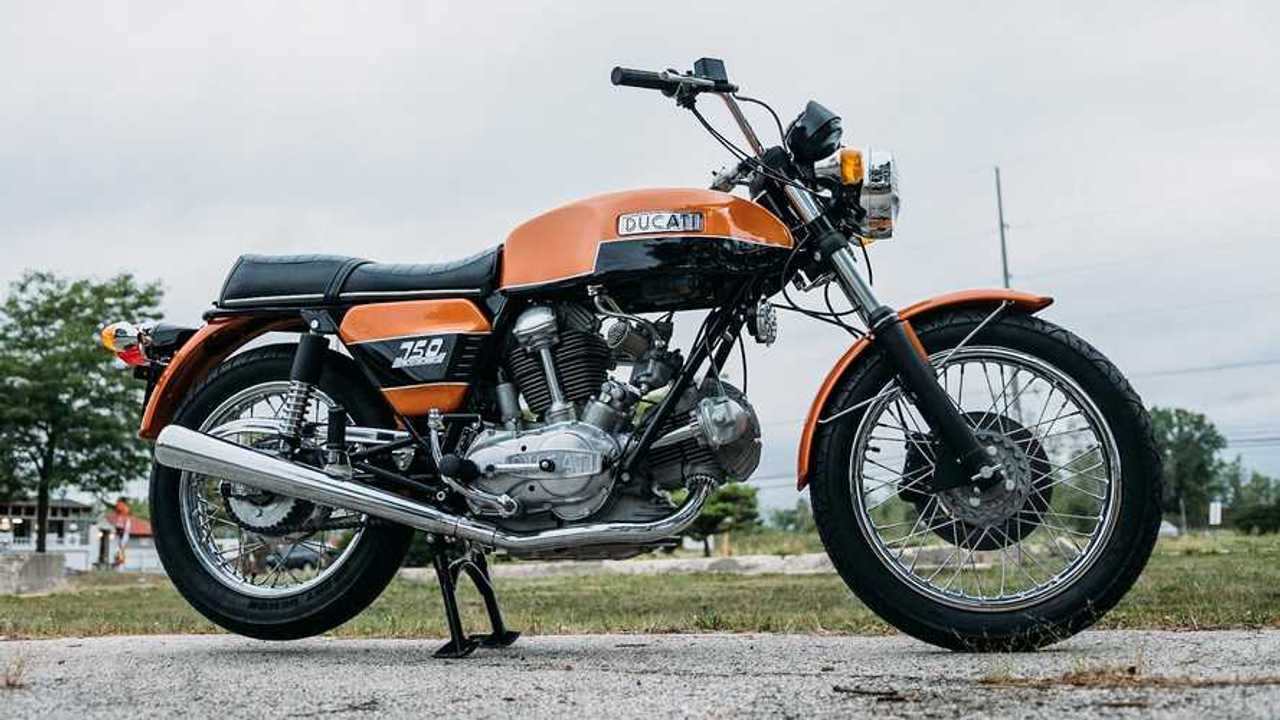 The 90-degree V-twin would become a staple of future Ducatis.

As motorcycles like the Honda CB750 and Kawasaki Z1 started defining the superbike category, Ducati knew they needed to keep up, both on the track and on the street. The biggest engine they made at the time was a 450cc single, which would never keep up. Designer Fabio Taglioni came up with the idea of adding a second cylinder at a 90-degree angle, creating Ducati's famous L-twin engine. The 750GT was the first road bike to use it.

After an extremely fast design cycle in 1970, Ducati introduced the 750GT for 1971. This example from 1974 is among the last of about 4,000 examples, aside from an additional 40 built during 1978. It has undergone a full restoration by the Guzzi Doctor costing nearly $20,000. Originally dark red, the bike has been refinished in an attractive orange and black color scheme. Everything has been painted, powdercoated, and polished to look as good as new.

The engine is the centerpiece of this bike and was rebuilt in 2020. It received resurfaced valves and seats, honed cylinders, and custom gapless piston rings. The cases were split, chemically cleaned, and resealed. The shafts have been shimmed to factory specs, and the carburetors have been rebuilt and ultrasonically cleaned. The bike has an updated solid-state regulator/rectifier. the covers have been polished, as well as the Conti mufflers. It starts on a single kick and runs and rides beautifully.

The rest of the bike is mostly original with a few upgrades. An aftermarket left switch controls the horn, high beam, and turn signals. The turn signals themselves are from Aprilia. The single front disc brake features a rebuilt Scarab caliper and a replacement Brembo master cylinder. The odometer shows just over 12,000 miles, of which 11,000 were ridden by the current owner during his 35 years of ownership. At the time of writing, the current bid on this bike on Bring a Trailer is $12,500, which is a fraction of what this bike and the work put into it are worth.

Everything New In Ducati’s 2021 Motorcycle Lineup