A unique twist on a rather special bike.

The Triumph Bonneville is undoubtedly one of the most iconic motorcycles to ever roll off the production line. Loved the world over, the classic British twin has been in existence for more than half a century, boasting countless iterations in multiple configurations. A rare, special edition variant of the Bonneville was released a few years ago. Meant to pay homage to the legendary Steve McQueen, the special edition Bonneville 865 featured matte green paint with black accents and significantly fewer chrome bits and pieces as opposed to the standard Bonneville.

However, the special edition Bonneville's reception was rather lukewarm, and some people viewed it as nothing more than a standard Bonneville with a fancy paint job. Alas, what we have here today is by no means a standard Bonneville. With an emphasis on cool, this bike is every bit what Steve McQueen would have been doing on two wheels during his time, albeit altered for the modern day. Built by Absolut Motorcraft in Spain, the Steve McQueen Triumph Bonneville 865 has been turned into a scrambler, and has received a major makeover in the process.

For starters, the Bonneville was outfitted with a slew of parts that would make it perform as well as it looks off-road. A set of enduro Burly Co. serrated footpegs are guaranteed to keep the rider's feet firmly planted when the terrain gets gnarly. A Bitwell Moto handlebar sits upfront giving the bike an upright ergonomic, as well as a ton of leverage for muscling its 500 lb build off-road. A Tamarit Motorcycles skid plate and fork gaiters keep the bike's vital components free of dings and rock chips.

To transfer power to whatever terrain the bike is faced with, a set of Mitas E-09 tires were fitted. As is the case with many top-spec custom builds, this particular Bonneville underwent a few electrical upgrades. For instance, a slim and understated Motogadget speedometer replaces the stock analog gauges. A Bates headlight and LED indicators also tidy up the bike's fascia, and a Motogadget license plate bracket keeps things tidy and compliant outback.

To breathe more life into the bike's classic twin, a free-flow K&N air filter kit was fitted. A custom fabricated 2-into-1 exhaust was also fabricated, and topped off with a Tamarit muffler to accentuate the bike's lopey idle and aggressive growl. In total, the bike lost around 70 lbs as a result of all the modifications, giving it a better power-to-weight ratio. To top it all off, the matte metallic green paint was done away with in favor for a white and black colorway adorned with gold accents. 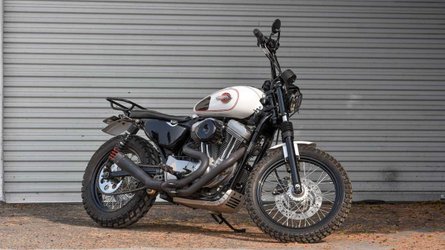 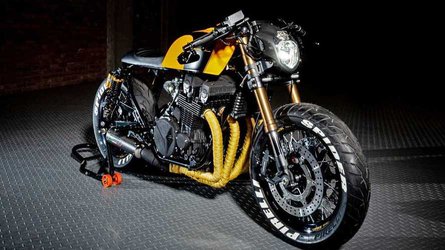