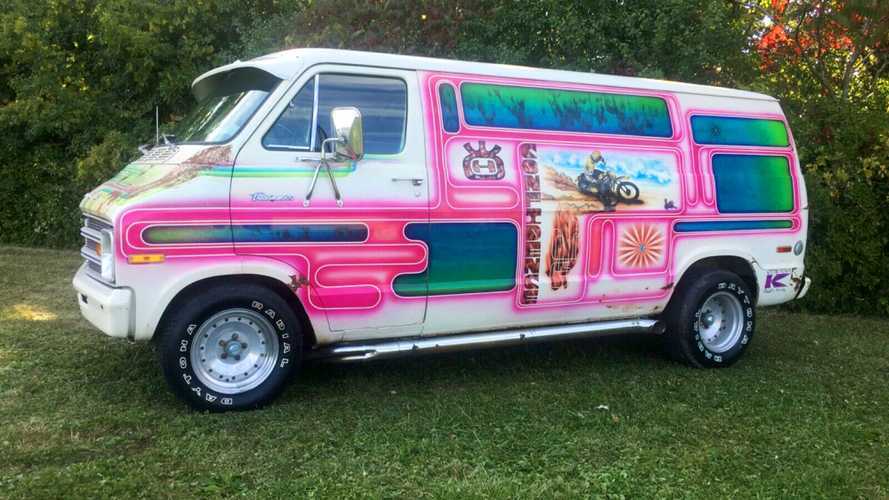 If, like me, you're a rider of a certain age, you may remember the extremely rad custom van movement. Exemplified by funny-shaped bubble windows, wild paint, chrome side pipes, and lots and lots of shag carpeting, vannin' was all the rage from the early-70s to the early-80s. Vanners would take the humble, full-sized vans produced by Ford, Chevy, and Dodge/Plymouth and turn them into rolling pieces of psychedelic art-slash-RVs influenced by sci-fi, fantasy, heavy metal, and California hot rod culture. The movement was so big that a few of the OEMs jumped into the fray with their own factory customs—The Ford Cruising Van, for example, and Dodge's Street Van.

Most shaggin' wagons were custom-made passion projects, however, not mass-produced cash-ins designed by a bunch of crew-cut, tie-wearing squares in a Dearborn boardroom. They were the fruit of some wild-eyed, feathered-haired customizer with a thing for half-naked barbarian ladies and a knack for wrenching. Customizers like the Late John Simpatico of Rochester, NY.

Once upon a time, it seems that Mr. Simpatico was a local semi-pro motocross racer—with a handful of sponsors and Husqvarna dealership support—who campaigned one of Husqvarna's legendary CR360s. He was also, apparently, a vannin' man if his extremely rad bike hauler is anything to go by. Friends, meet Factory.

This gorgeous piece of Detroit iron started out life as a 1974 B100 Tradesman half-ton cargo van. It's powered by a trusty Dodge 318 V8 mated to a Chrysler A-727 Torqueflite three-speed automatic transmission, and when it came off the line at Windsor it developed a pretty respectable 230 horsepower and 340 lb.-ft. of torque. It was a perfect base upon which to build a vehicle to haul Simpatico's bikes, his tools, and very likely as many ladies as he could carry in shag-carpeted comfort.

Simpatico bought the van new in 1974. Once he got his hands on it he put a mild Crane cam in the old 318 and some free-flowing headers to feed those big old side pipes. Then he turned it over to local talents King Kustom Paint and Designs and Lettering by SPOOK for the full-on Vannin' treatment. The Tradesman got a groovy new interior, a bonkers paint job, and a new name—Factory.

The exterior features an amazing two-part mural painted with, according to an original custom show display sign, "Eight candy colors over artic (sic) white". The driver's side features a determined Husky rider thrashing a yellow bike around a dirt track, the Husqvarna logo, and the word "CONFIDENCE" done in an extremely 70s font.

The passenger side is the piece de resistance, though. It features a mustachioed, blonde-haired 70s Adonis, presumably Mr. Simpatico himself, lounging around in jeans, sandals, and a plain white t-shirt. He's smoking a hookah and dreaming of motocross glory. The whole piece is accented by multi-colored bubbles, colorful, dreamy swirls, and more praises to Husqvarna. It's glorious. The exterior is tied together with Cragar Super Trick-style wheels wearing raised white letter tires, chrome side pipes (natch), a windshield visor, a chrome trailer hitch, and other period accents.

The interior is resplendent in "French Lafeyyette (sic) Redwood, Antique White Stone, Black Cordovan Naugahyde (there's a word you don't hear every day), and Crimson Shag Carpeting". The dogbox is airbrushed with more scenes of motocross glory and continues the exterior's theme. The dash pad, headliner, and bucket seats are black (peep that killer tuck and roll job on the dash pad and headliner), two motocross bike wheel chocks are bolted to the rear floor, and there is, of course, a tape deck.

When not hauling bikes around, Factory made the local car show circuit. Starting in 1975, John and Factory took numerous first place trophies at custom shows in Rochester, Buffalo, and Syracuse, NY. Unfortunately for us, and for Vannin dudes everywhere, family responsibilities eventually put a crimp in Simpatico's racing career. He hung up his racing leathers in 1981, and Factory—along with the 1975 Husqvarna CR 360 she was built to carry—was laid up in ordinary, as it were. The van languished away in storage until Simpatico's death in 2019 after a long fight with cancer. Before he died, Simpatico turned over stewardship of the van and the Husky, along with a stack of paperwork and a pile of trophies, to a friend and fellow dirt rider named Butch who is currently selling the old girl on eBay.

"All the original paperwork for both the van and bike were passed on along with photos and trophies," Butch told me via eBay messenger. "While cleaning the van I found some riding gear, a few cards from a past love, 1975 stag party tickets, roaches in the ashtray, a pipe, a 35mm film container (weed), and a salt shaker for tequila. The 1970’s where wild and carefree." Man, what I wouldn't give to have ridden, and partied, with John Simpatico.

If you'd like to own this amazing 70s time capsule, and why wouldn't you, mosey on over to eBay and place your bid. Bidding is currently at a paltry $1,902 Yankee dollars with four days remaining on the auction. While the Husqvarna isn't included in the auction, the seller told me that whoever buys the van will get the opportunity to buy the bike along with it if they want. If not, the bike will go up for auction itself soon.

Friends, seriously, this is a fantastic piece of motorcycle and custom car history. A perfectly preserved survivor with some great patina and some killer stories to go along with it. If you have the means, do yourself a favor and snap this one up STAT. Then drive it by Detroit so I can have a look at it.