So rough, so tough, so little.

Thai custom shop K-Speed has earned a reputation for heavy-hitting lightweight builds. Look no further than its handsome take on the Honda Monkey or its refined rendition of the Honda Super Cub for evidence of the garage’s discerning design. This time around, the Bangkok-based brood trained its eye Honda’s latest reimagining of another Cub family member, the CT125.

Affectionately nicknamed the Hunter Cub and Trail Cub, the new mini moto revives Honda’s CT platform. While the original Trail Cubs came in 70cc and 90cc variants, the new CT125 borrows the SOHC, fuel-injected single from the current Super Cub. Due to the model’s rugged nature, K-Speed ditched the urbane air of its past builds and sided with a more utilitarian approach.

The build team got right down to brass tacks by swapping out the stock tires with proper knobbies and tearing off the strut-mounted front fender in favor of a high-mounted mudguard. Enduro-style handlebars also improve off-road handling while K-Speed's proprietary dual shocks provide a 1.5-inch lift in the rear. A streamlined rear fender replaces the original equipment with a “toolbox” styled top case offering a modicum of carrying capacity.

Even with utility at the forefront of the build, K-Speed couldn’t ignore the bike’s aesthetics. Faithful to the “combat” theme, the Gatling gun exhaust tip rotates faster as the RPMs climb. Up close, the distressed paint job captures the well-earned patina of a grease-caked machine. From afar, the effect resembles woodland camouflage. Coupling that livery with the mock Gatling gun makes this CT125 Hunter the perfect companion for an avid huntsman or aspiring militiaman. 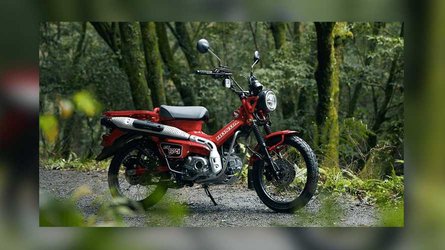 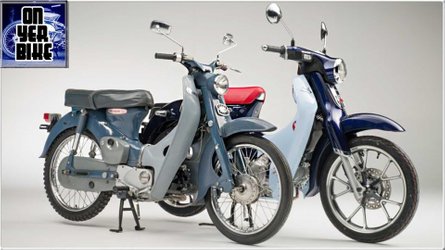 This Is How The Honda Super Cub Took Over The World

However, elements like mesh-backed frame cutouts and finned side panels best illustrate K-Speed's attention to detail. The diamond-stitched seat, bar-end mirrors, and robust headlight grill complete the reverse restoration while lending a level of practicality to the trail bike. The team tops off the build with larger sump guard, slimmer footpegs, and an extended kickstand to account for the raised rear end.

While it seems like K-Speed left no stone unturned, they left the stone-simple engine and brakes untouched. Aside from adding steel-braided lines to the braking system, the bike's go and slow is factory-issued and more than enough for the Trail Cub’s intentions. If you weren’t digging the CT125 yet, K-Speed's build should give you a nudge in that direction. Even if the Hunter Cub is still unconfirmed for North America, we can all dream of the possibilities thanks to K-Speed's intuitive and imaginative CT125 Combat.