Riding Dirty: Getting Back In The Saddle

It's been a long road to recovery, but it's getting dirtier.

Everything is going exactly according to plan. Muhahaha. Isn't that what the evil overlord always says before the hero pops in, saves the world, and thwarts his diabolical plot?

Since I'm not an evil overlord (I think), I hope that doesn't happen, because my recovery from my busted foot is going great. As I predicted, I was able to start riding again once I could put some weight back on the no-longer-broken foot. Fortunately (as far as motorcycles are concerned), it was the right foot, whose only job is to operate the back brake. As long as I could put a little pressure on it—not much needed, especially if I stick to the pavement—I was good to go. 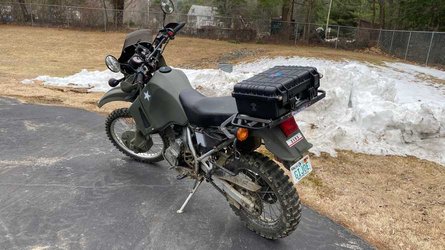 Weekend WTF: The Thrill Of Victory And The Agony Of De-Feet 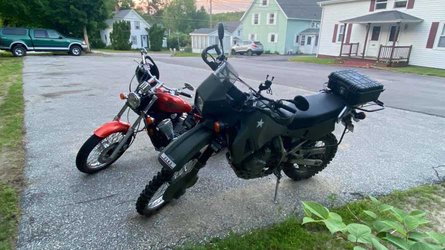 Weekend WTF: Getting Back On After An Injury

At this point, the doctor has cleared me for full weight-bearing on the formerly broken foot. I'm not quite there yet, since I need to rebuild the muscles that have been dormant and unused for months inside casts and my walking boot. For my first several rides, I still wore that boot instead of my usual riding boots for extra support. A full gel insole worked wonders to dampen the vibrations of a single-cylinder engine.

Even then, I had work to do. I had to gradually increase the duration of my rides so that eventually, this past week, I handled a full day trip on paved roads. It was a blast, and following the route on the Garmin Zumo GPS I picked up over the winter worked beautifully. If I rode a road bike, my recovery would be complete, as far as motorcycles are concerned.

I don't ride a road bike. I ride a Kawasaki KLR 650. It can do roads just fine, particularly with its new Shinko 705 tires that are a bit more road than dirt oriented. But I want to ride dirt, too.

I'm not ready for trails, but there are plenty of maintained dirt roads near me—some in better condition than others. I recently started practicing on them to start working my way back toward the full dirt riding I was doing last year. Just this week, I started taking my first steps outside of the special supportive walking boot for injuries like this. I can't walk well without it, and I use my cane, but I can do it. So I started putting on two quite supportive motorcycle boots to ride. These provide more support for my weak lower leg than a basic pair of shoes, but they still allow me to flex my foot to operate the back brake properly.

This has worked perfectly. I'm much slower than I used to be, as I get used to riding on dirt again, but I can control both brakes as I should. I'm starting to use weight on the footpegs instead of just steering to turn the bike. I'm also starting to stand on the pegs again, but I don't yet have the strength and stamina to do it for long. Baby steps. It'll get there.

I think my current approach is working well. I don't make progress unless I push and expand my limits a little, but I'm also not pushing too hard and setting myself back, either. If I ache a little after a ride, I go right back into my walking boot and use the cane to further lessen the load. If I work my foot hard, I give it a rest to recover. As long as I can resist the urge to go bombing down trails again, I should be fine. I'm so happy just to be riding again that I think I can hold off the urge.