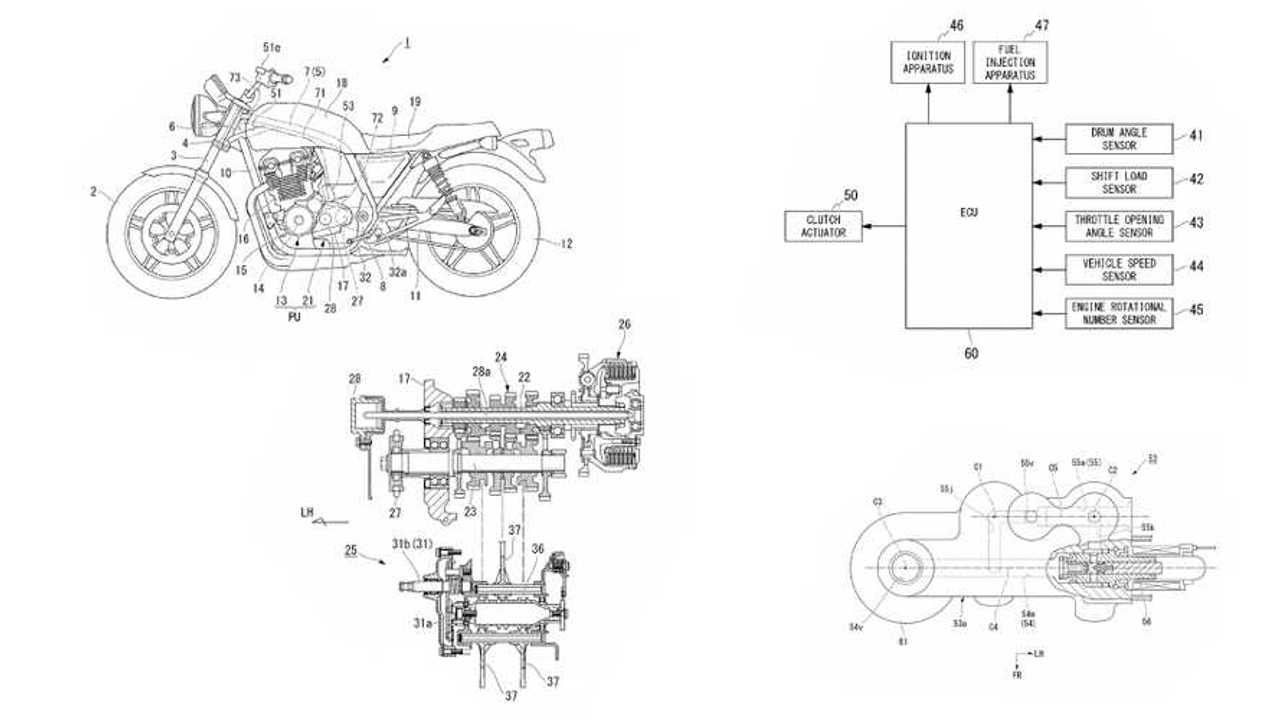 Once again, Honda is working on a semi-auto clutch. A set of recently discovered patent drawings shows Honda’s got an all-new design in mind which avoids many of the problems of the previous Hondamatic designs of the 1970s and 1980s, as well as the current dual-clutch transmission (DCT) setup.

The patent drawings (published May 21, 2020) show a new semi-auto shifting arrangement. Similar to old Hondamatic designs, the new Honda system would have the rider manually shifting their way through the gearbox, but without manually operating the clutch. Instead, there’s a computerized “smart clutch” that works like a quickshifter, cutting power when it’s time to shift. The rider selects the gear with a standard foot shifter, and the bike’s electro-gadgetry takes care of the clutch function.

Honda’s drawings show the system attached to a motorcycle with a standard six-speed gearbox. Previously, the Hondamatic had a two-speed system, with low gear for slow speed situations, a high gear for once speeds picked up. The newer DCT designs have a paddle shifter on the handlebars for clicking through the gears if the rider wants to bypass the DCT’s auto-shifting function.

The new Honda design should avoid the crummy performance of the Hondamatic, which had a terrible reputation for wimpy output. Honda’s new design should also prove simpler than the uber-complicated DCT arrangement, and reduced complexity should mean more reliability, and more affordability. Quickshifters are quickly becoming available on a broad array of motorcycles, and if Honda’s new semi-auto design is basically a glorified quickshifter, it’s likely it would be a negligible cost increase over a standard clutch design.

It’s interesting to see Honda still so hyper-focused on this technology, decades after the original CB750 Hondamatic. Honda personnel are obviously convinced they need to build easier-to-ride bikes. The technology in this patent drawing may never make it to market, but Honda seems determined to figure out how to eliminate manual clutches, even if experienced motorcyclists may wonder what the fuss is all about.