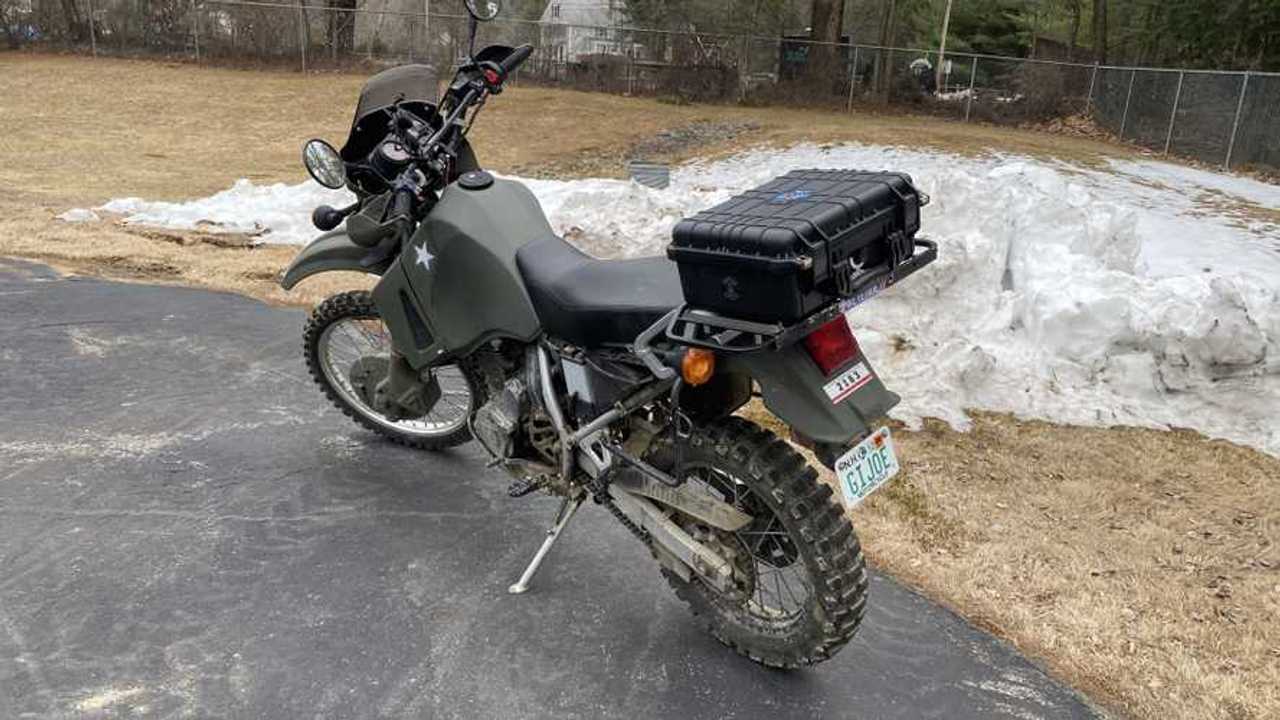 I've written at length about my Honda PC800, a strange yet immensely practical footnote in Honda's history. Last year I sold it and picked up one of the more common motorcycles out there, a 2005 Kawasaki KLR 650. If you've read my Riding Dirty series, you know that this is my first dual-sport motorcycle and that it's already seen more than its share of dirt adventures, both good and bad. Taking a closer look at the bike itself will explain why I snatched it off Craigslist when I did, even though I wasn't actively shopping right then. It was the right bike at the right time.

First of all, no, this is not a former Marine diesel KLR. Despite its olive drab color scheme, this is an ordinary gasoline-powered civilian model. The mid-2000s KLRs are known for their red paint quickly fading to an ugly pink in the sun. While the factory paint can be rehabilitated, a previous owner decided to repaint the tank and body panels instead and did a rather good rattle-can job of it. I like it, and have even found the identical spray paint to touch up my occasional new dings and scratches.

It's what's under the skin that convinced me to buy this particular bike. It's not radically modified. There's no big-bore 685 cc engine kit. It even still has the stock exhaust. It has the modifications that matter, though. The balancer chain adjuster lever, which KLR people commonly call the "doohickey," had been replaced with one from Eagle Mike, thus removing a potential ticking time bomb inside the engine. It had a beefy skid plate, toothy footpegs, and an extra-long shift lever that's perfect for changing gears while wearing motocross boots. It had an extra-large rear rack, perfect for attaching your milk crate to, that also overhangs and protects the rear turn signals from drop damage. It also came with soft saddlebags, Acerbis handguards, and a new AGM battery. The biggest bonus of this particular bike, though, was its Cogent Dynamics suspension, front and rear. This is the Cadillac of KLR suspensions, and worth half of what I paid for the entire bike. It keeps the wheels firmly planted on the ground in all conditions, and completely absorbs the landing from any jump or wheelie I've ever done. Basically, it was the perfect bike for me to start my dirt riding adventures, and would have cost significantly more than the purchase price to duplicate on my own.

I haven't changed it much since I bought it last July. I swapped my Cyclops LED headlight bulb to the KLR from my PC800 before I sold it. I added a USB plug and Ram Mount for my phone for navigation. I bolted a Harbor Freight special no-name Pelican case to the rear rack for a small top trunk. I replaced its no-name road-oriented tires with a set of Dunlop D606 road-legal knobbies that Kate gave me. I changed the oil. I painted white stars on either side of the gas tank to give the bike that World War II vintage look. Finally, when a co-worker told me the license plate GIJOE was available in New Hampshire, I had to get it.

As the days got shorter I bought a set of Amazon LED driving lights and a mounting bracket for them from JNS Engineering. While I installed the bracket, I did not have time to install the lights before putting the bike away for winter, so that's at the top of my list of projects. So is installing the Garmin Zumo 396 LMT-S GPS I bought on sale over the winter, all the better to follow GPX files of all the dirt tracks I can find online. Kate also gave me a set of hard luggage to replace my saddlebags. I need to buy a rack to mount it, though I'm questioning whether I'll need to if I end up using my camper van for the long hauls. I'll also need some new brake pads front and rear, as well as new tires since the Dunlop knobbies didn't last long. If I rode mostly dirt it wouldn't be a problem, but I commute on the bike as well, and still enjoy road rides as well as dirt. My next tires will be more road-oriented, though certainly not to the exclusion of dirt, either.

The entire project, of course, is on hold due to my broken foot, as well as the snow we just got overnight (yes, I know it's April 18—this is New England). I'm itching to get back on the bike again, though, and work on making it truly mine, setting up the way I want it for whatever kind of riding I decide I want to do with it. Although my injury has me thinking about being less adventurous off-road in the future, I don't have to give up the KLR to get a good bike for paved and dirt roads. That's the beauty of the KLR. It'll do it all.