Will More Hondas Get A Gold Wing Suspension? 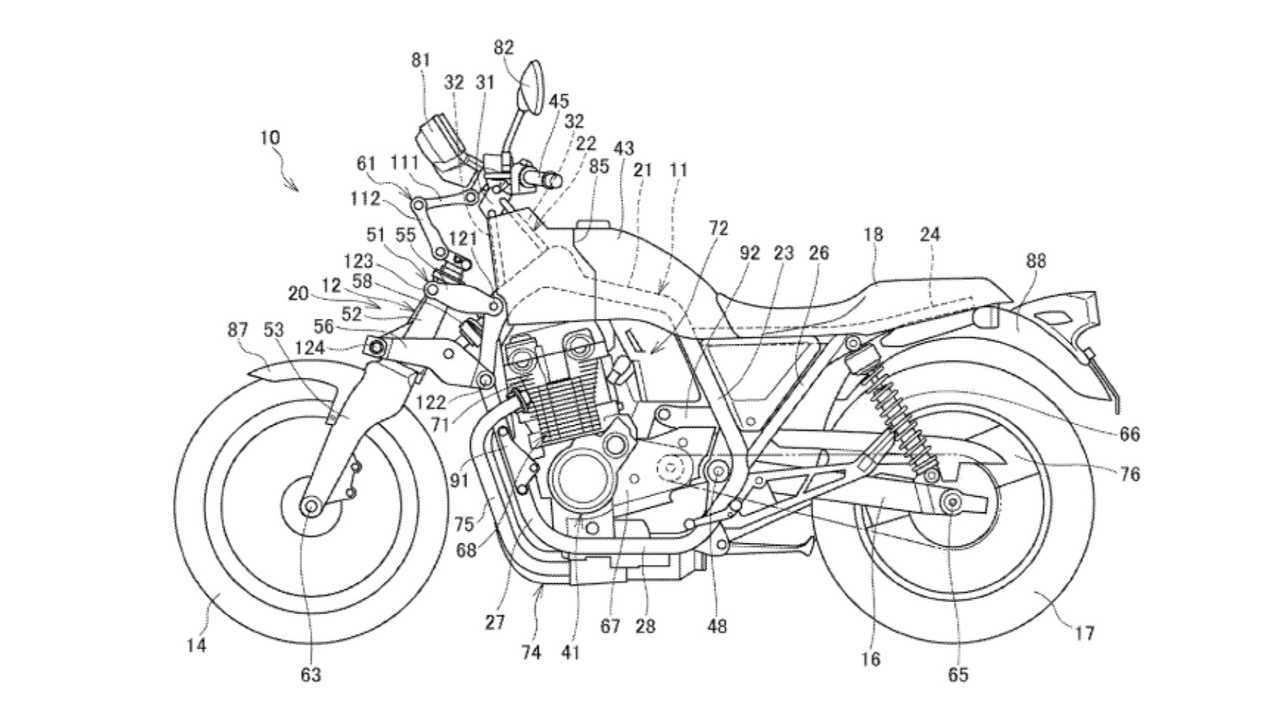 The current Honda Gold Wing features a unique front suspension, at least for a motorcycle. Recently published patents, however, show that Honda is at least considering spreading this design across more of their range.

Rather than traditional telescoping forks, the 'Wing has a double-wishbone suspension, rather like BMW's Duolever front suspension, the suspension from many race cars, or my own 1989 Civic Wagon RT4WD. In 2017 we wrote, "Designed to offer reduced friction and less inertial mass for the front-end components that are manipulated via the handlebars, the system also leads to more compact vehicle dimensions, as its different stroke trajectory enabled engineers to position the engine closer to the front wheel." In other words, since the front wheel travels straight up and down as it absorbs bumps, rather than the angle of traditional forks, the front wheel won't move back toward the frame under compression and bash into the engine, allowing engineers to place the engine and front wheel closer together.

The Wheels Beneath My 'Wing:

The patents in question show a similar suspension design, but on motorcycles that are definitely not the Gold Wing. Though not mentioned by name, the drawings pretty clearly show variants of the CB1100 and Super Cub. These bikes are about as different from the Gold Wing, and each other, as you can get. Honda probably chose these bikes on purpose, just to see if the suspension swap could be done.

The CB1100 is easy to identify from its naked frame and inline-4 cylinder engine. This engine's height, a problem the Gold Wing doesn't have, makes it difficult to mount the spring and shock as well as the lower control arm in the limited space available, but Honda has found a way. The entire point of the CB1100 is to be a sporty, sharp-looking retro bike, and this suspension makes it look anything but classic. It would certainly be smoother and more comfortable than traditional forks, however, which is the benefit this design brings to the Gold Wing.

In the diminutive Super Cub, the engine lies low like the Gold Wing. The shock and spring can sit almost vertically, and the lower control arm attaches even farther back in the frame. Again, there's no reason why Honda would actually build a Super Cub this way. A Super Cub with a modified Gold Wing suspension is like putting a Formula 1 front suspension on a Civic while leaving the rest of the car alone, and just as ridiculous.

We'll probably never see these designs on a production CB1100 or Super Cub. Production was likely never the point here. By going through this design exercise, Honda engineers came up with enough new ideas that Honda thought it worth patenting them, just in case they could come in handy on future models—a touring version of the CB1100, perhaps, or maybe a touring Grom?