Welcome to the freak show.

Ducati has been slowly perfecting the Monster since the bike’s introduction in 1993. With the streetfighter’s low development costs and high popularity, many consider it as the bike that saved Ducati. Though the Monster is among the Bologna firm’s most decorated models, that doesn’t mean there isn’t room for improvement. To that end, Italian automotive designer Paolo Tesio took a stab at redesigning Ducati’s top-selling naked bike—making the Monster truly monstrous. 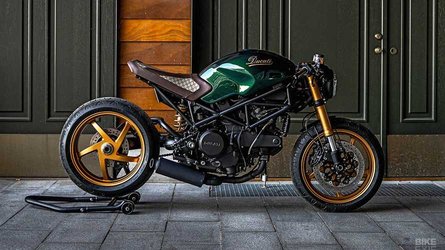 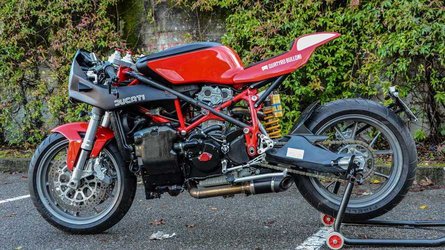 Going by Tex Designs, Tesio retained some of the most iconic Ducati parts for his Frankensteinian experiment. By rerouting the exhaust header, Tesio declutters the streetfighter’s chassis and brings the trellis frame to the fore. The Monster’s single-sided swingarm, L-twin engine, and premium suspension make the jump, but aside from those elements, the remainder of the concept comes from Tesio’s mad scientist imagination.

The first design change that catches the eye is the front headlight/radiator/fender unit hanging from the front end. While the radiator tubes call to mind Bane from the Batman comics, the tubes’ paths look like they could hinder the Monster’s turning radius. Also, the added weight of mounting the radiator to the fork tubes could make the steering feel heavy and laborious.

Stealing a page from Erik Buell’s book, Tex Designs equipped the front wheel with a dual-disc perimeter braking system mated to six-pot calipers. The jagged cutouts in the rotors carry on the bestial quality of the concept while adding the practical use of shedding speed. Out back, the Monster gains a brutish tail while clip-ons make the riding position even more aggressive.

Though the S2 Braida concept may not be an advancement in the performance of the Monster, the predatory demeanor of Tesio’s design is unmistakable. From the muscular lines of the tank to the scalpel-like shape of the front end, Tex Designs makes the Monster look the part.