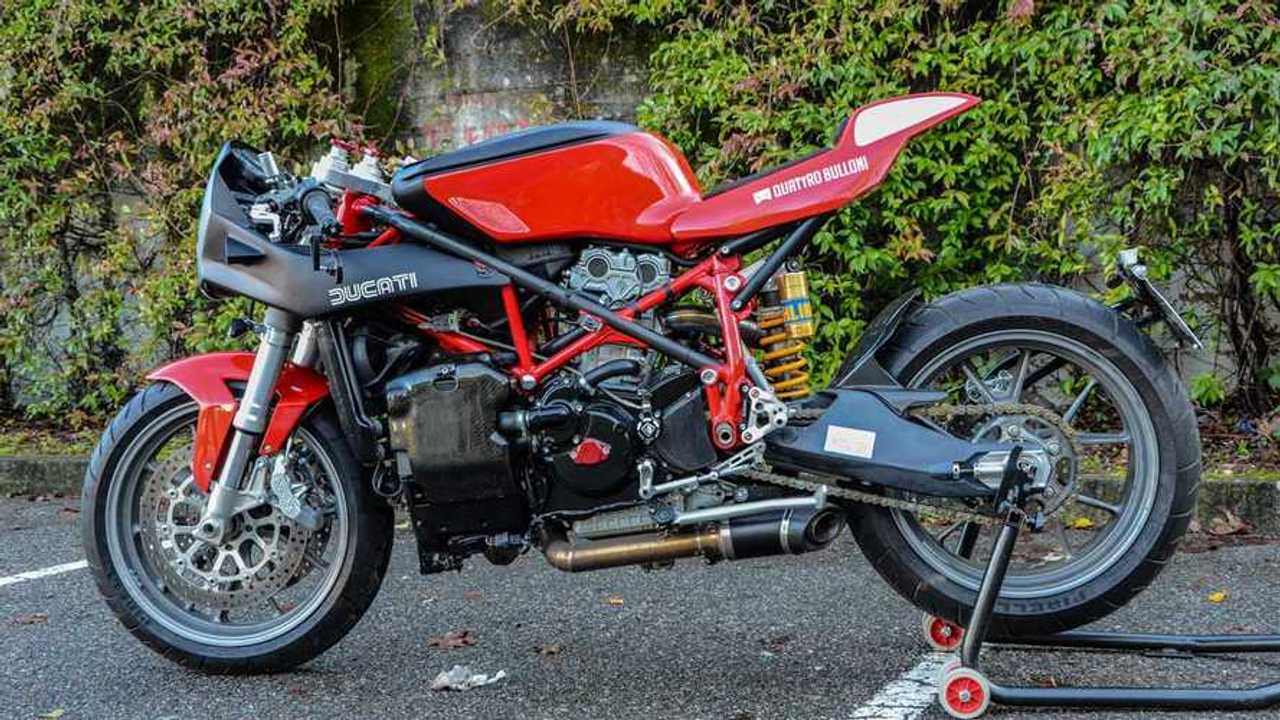 This bike screams performance and style.

Today’s custom motorcycle scene is rife with good looking, meticulously built machines that look absolutely amazing, but deliver lackluster performance figures. Yes indeed, custom motorcycles are more often than not, meant to be rolling pieces of art, however I believe that a custom bike’s value is so much greater if it can actually pack a punch performance-wise. Some of the more notable custom motorcycles we’ve written about here deliver just that: stunning looks and stellar performance. This is exactly what we’ve come across with this custom Ducati 999.

To many, the Ducati 999 is the ugly duckling of Ducati’s sportbikes. Detracting heavily from the gorgeous lines of the venerable Ducati 916, the 999 featured an insectoid fascia and rather boxy and angular body lines. It featured Ducati’s well-known 998cc liquid cooled, four stroke, 90 degree V-twin with desmodromic valve timing actuating four valves per cylinder. With around 140 horsepower, depending on the variant, the Ducati 999 was no slouch of a sportbike. In fact, its race-spec counterpart bagged Ducati several championships in the Superbike World Championship for 2003, 2004, and 2006.

Diving right into this particular custom Ducati 999, it’s safe to say that right off the bat, this bike brings out the racer in cafe racer. Built by Luca Brambilla of 4Bulloni, a custom motorcycle shop in Italy, this bike was meticulously crafted to perform as well as it looks. Luca himself is no stranger to racing. In 2018, he finished first place at The Reunion and Glemseck 101 sprint races. He is also a decorated bike builder, having won several awards, including a trophy for best-emerging builder at the Pakel awards in Italy.

For someone with deep technical knowledge from over a decade of working as a professional mechanical designer, Luca has a rather traditional method of crafting his custom bikes. Starting out with a simple paper and pencil, Luca slowly but surely transfers the designs in his head into something visual and tangible on paper. Further refinement comes into play as he starts fabricating and handcrafting the custom parts of the motorcycle.

The Ducati 999 project came into Luca’s hands when a close friend of his by the name of Giacomo Tricoli brought the bike into his shop. An avid motorcycle rider and occasional racer as well, Giacomo’s Ducati 999 was already decked out in all the race-spec goodies any Ducatista could dream of. Sporting aftermarket rearsets, an FF Fresco full exhaust system, an upgraded dry clutch, and a plethora of other high end components and carbon fiber bits and bobs, this Ducati 999 was up there in terms of performance. Giacomo, however, wanted something that would transcend the bounds of mere performance.

Giacomo and Luca subsequently agreed to transform the 999 into a streetfighter. With his design influence rooted heavily in the race bikes if the eighties, Luca sought to differentiate his 999 streetfighter from Ducati’s existing Streetfighter models by giving it a touch of cafe racer by way of smooth, flowing lines, and of course, a round headlight. Having done away with the insectoid fascia, Luca stripped the 999’s fairings and crafted a bespoke retro-style bikini fairing, exposing the L-twin engine. The rest of the custom bodywork was handcrafted from aluminum sheet metal. The 999’s original instrument cluster was retained and fitted seamlessly into the new front assembly, giving the bike an interestingly contrasting retro-modern aesthetic that screams performance. The bike’s tail section was, again, crafted from aluminum with all the lighting and bracketry relocated on a swing arm mounted assembly. All this gives the bike’s rear end a completely clean and shaven look--straight from race bikes of the seventies.

To top it all off, Luca left the iconic Ducati red motif largely untouched--making use of Ducati’s proprietary tricolor scheme. This incorporates a tad of black and silver for added contrast. Lastly, Luca made use of Ducati’s classic seventies logo to complete the cafe racer/street fighter aesthetic.