Bike-Spotting In Bangkok: A Quick And Incomplete Guide 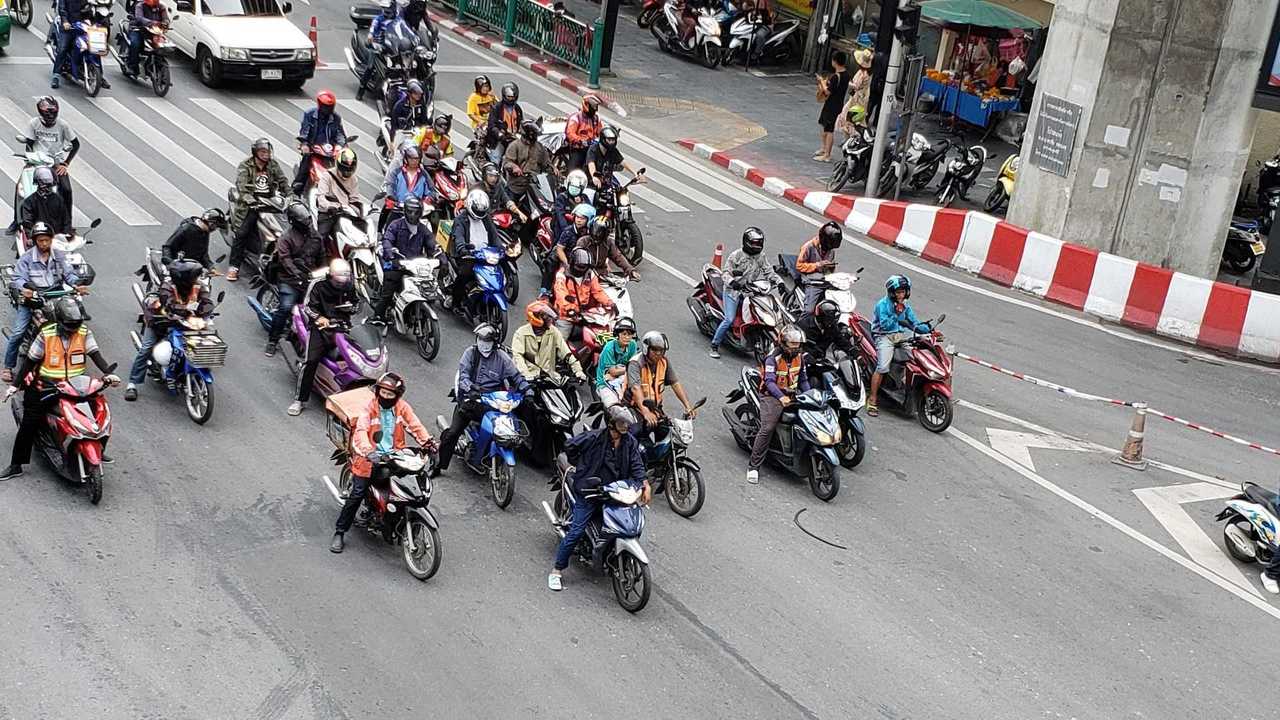 If you’ve never spent a lot of time in a major city where two-wheelers are a hugely dominant road force, Bangkok is almost completely guaranteed to overwhelm you. It doesn’t matter if you were born and raised in a large city elsewhere. I grew up in Chicago, which is plenty big—but it’s not in any way dominated by two-wheelers. So, uh, I was Not Prepared for motorbikes absolutely everywhere.

Get Up And Go:

I do mean everywhere. After spending a couple of weeks in Bangkok and some surrounding areas, here are a few stray observations.

Gallery: Bike-Spotting In Bangkok: A Quick And Incomplete Guide

Traffic flows are unpredictable at best.

Lane splitting and filtering is expected, but the only consistent rule seems to be that if there’s any inkling of space, a bike will take it. The space may look impossibly tight, even as someone else who rides—but it doesn’t matter. It’s like cats and boxes, only with the spaces in between passenger vehicles.

There are a wide variety of bikes we don’t get here—but 125ccs rule everything.

From my understanding, this has to do with an emissions-based taxation scheme. Bikes that output lower emissions—such as newer 125cc scooters—are taxed at a lower rate than bigger, older, and/or dirtier bikes. Keep in mind that two-wheelers are everyday transportation here, not ridden just for fun or leisure.

You can and will see every configuration of multiple rider combinations on bikes.

While there are plenty of single riders, you’ll also see anywhere from two to five people riding the same bike, depending on where and when you happen to be looking.

I saw more than one entire youngish family (including a toddler) riding on a single 125cc scooter at a time. However, that was more likely in provinces outside the city of Bangkok, from what I observed.

Men and women of seemingly every age and description rode by themselves, or together, and it didn’t matter if a young woman or an old man was up front. Seemingly anyone could be a rider, or a passenger.

Helmets are legally required—and many people wear them, but not all.

In Bangkok proper, I saw many more people wearing helmets than not. I saw fewer helmets the further away from the city we got, however.

Anything 400cc and above is considered a “Big Bike.”

You’ll see a store with “Big Bikes” in the gallery above—and that’s why. You’ll also see one lonely rider on an Africa Twin in my gallery. After days of seeing almost nothing but 125s, that thing looked ENORMOUS when I spotted it while I was out walking around one day.

Incidentally, some news reports have mentioned the possibility of lane-splitting, speed, and other restrictions on big bikes starting later in 2019. If you’re planning to visit and rent a bike, new license requirements for tourists may be in place when you get there.

You’ll see this a lot, no matter where you go. People just walk around the bikes because it’s an everyday part of life.

Utility sidecars and even rugged three-wheelers are common rides.

From towering stacks of boxes out for delivery, to a big pyramid of propane tacks bound together, to your everyday food delivery riders, you’ll see anything and everything strapped to the backs of many 125s.

Plenty of commercial riders carrying goods abound, but you’ll also see regular passengers riding along in those utility sidecars, as well. Some of them even have benches.

Of course there are food bikes.

One of the first things anyone not from BKK learns about the city is that there is street food EVERYWHERE. From various delicious grilled snacks, to noodles, to some of the tastiest freshly prepared fruit you’ll ever eat in your life (trust me, I am part fruit bat, and I ate it ALL), there’s probably nothing you can’t find if you just keep walking.

The vendors, though? They have a job to do—so some of them ride. A grill cart attached as a sidecar to a bike is a totally common sight. Just pop out your umbrella to protect yourself and your customers from the scorching BKK sun, and you’re ready to go.