I Went To Hell On A Honda, Not A Handbasket 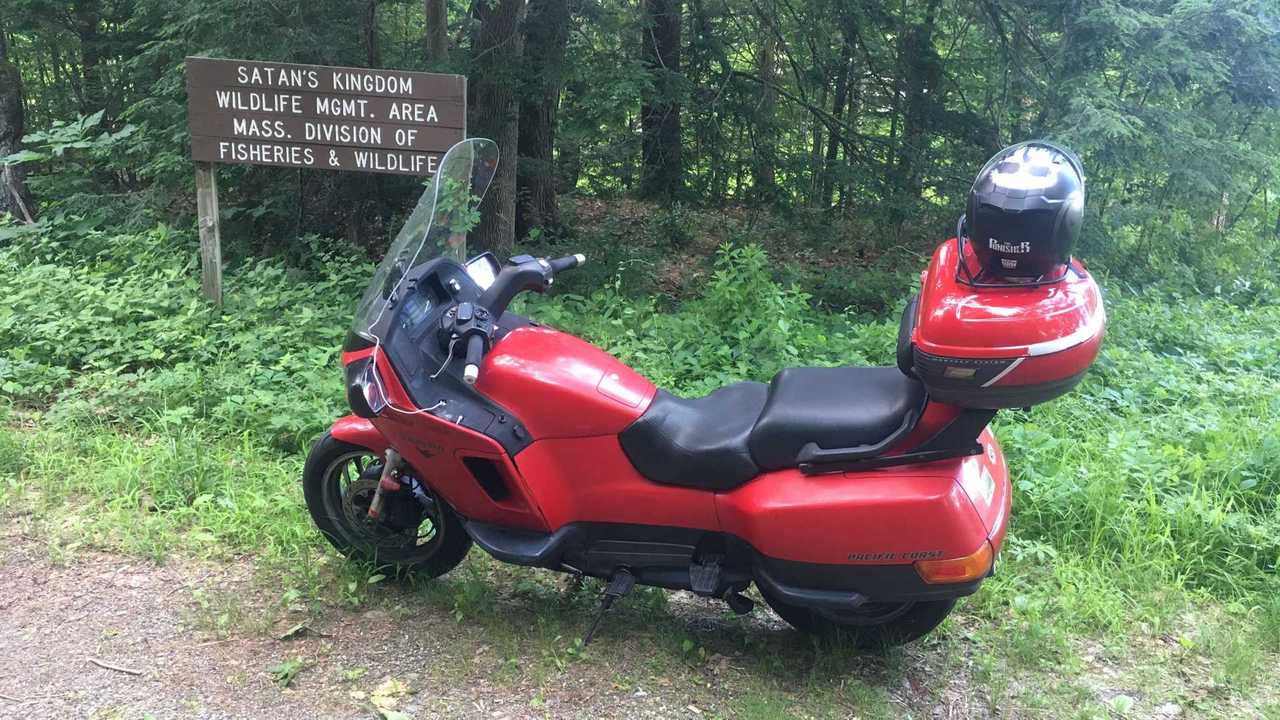 The PC800 is most certainly not a dual sport.

With perfect weather yesterday, my wife and I had to go out for a ride. While scanning the map for an interesting route home from our lunch stop, an interesting place name came up: Satan's Kingdom. With a name like that, we had to check it out.

Five Miles Of Hell Is One Gnarly Ride

Satan's Kingdom is an unincorporated community in Northfield, Massachusetts on the Vermont border. It earned its rather unique name in the 1670s during King Philip's War. Time and time again, Native residents attacked and repelled Europeans who attempted to settle in the area. Since colonists considered anyone who wasn't Christian to be a godless heathen at the time, they attributed the Natives' success to Lucifer himself. Today, even though the Natives are gone, it remains a mostly unsettled wildlife area.

The ride there was a fun series of state highways and back roads. Old Vernon Road was quiet and extremely scenic, surrounded by wetlands and forests. We saw herons and several beaver dams along the way. We passed through an area called Hell's Kitchen on the way. Strangely, Gordon Ramsay was nowhere to be found.

Despite beautiful weather, dark clouds surrounded us as we approached our destination. We even rode through a few large raindrops. We stopped for the photo opportunity, but since we were dressed for biking, not hiking, we soon saddled up to hit the road again. As we prepared, we heard a rather nearby thunderclap. Did I mention that there was practically no chance of rain, let alone thunderstorms, in the forecast? Ominous, indeed.

Waze indicated that if we kept heading north, we'd hook back up with West Road and continue north into Vermont, so that's how we went. After some more stunning natural scenery, we were also stunned to see the pavement end at a driveway with a "No Trespassing" sign and a dirt road leading ahead. My Honda PC800 is no dual sport, but I've been practicing on the numerous dirt roads near where I live in New Hampshire. Waze said it was less than a mile to our intersection, so we gave it a try.

The road began easy but degraded rapidly. Rocks began to jut out from the dirt. Ruts appeared, the bottom of which was muddy and quite slippery, especially on my Michelin Commander 2 tires that are absolutely not designed for the dirt. We were down to walking pace. I was particularly timid about dropping the bike, both because of my wife on the back as well as damaging the bike's rare plastic body panels. While my wife was laughing about the entire experience, which sure beats yelling at me, we also got to a point where we decided the trail (it was no longer a road) was too gnarly for two people on a PC800. I had her get off the bike, turned it around, and we went back the way we came. We managed to return to the main road without further incident.

It seems that more than 400 years after King Philip's War, Satan's Kingdom is still unfriendly to white people. Between the dark clouds centered on that area only, the thunderbolt and lightning (very very frightening), and Waze taking us down a "road" that turned out to be an enduro trail, there's something about that place that clearly didn't want us there. After our rather hellacious experience, we stopped by the Cathedral of the Pines on the way home to balance out our adventure. It's not every ride that takes you through both heaven and hell.