Just in case you wanted to make your FTR 1200 even cooler.

Indian has released a set of limited edition tank covers for their newly-released line of FTR 1200 motorcycles.

All The FTR Stuff:

Rumor Control: The FTR1200 Street And Adventure Are Coming
⠀

Each of five designs has been created by a well-known urban artist and is being released in a very limited run. Each artist is profiled on Indian Motorcycles’ website. Many of them started as graffiti artists, and the art shows it. These covers are very cool.

An icon in skateboarding, Steve Caballero’s “Cab Dragon” is an Asian-style dragon on a pale blue background. His art is inspired by hot rod culture and it shows.

Adam Turman created art with a phoenix on it, mildly apropos for Indian’s brand which has had several resurrections and is now by all accounts extremely successful. The flames meld with feathers, and bones with birds, in this fiery design. Turman began his art career by creating posters for local bands, and graduated to local wall murals from there. He’s heavily influenced by heavy metal and old comics.

An artist that simply goes by “RISK” has come up with a heavily graffiti-inspired and self-referential design complete with lettering and drippy paint accents. His art has come off the streets and into galleries and clothing and, now, motorcycles.

The work of Dean Stockton or “D*Face” can mostly be found on wall art around London. He started his career hand-drawring stickers and posters and has since moved on to fine art galleries. The helmets and skulls in his design are reminiscent of classic comic art.

Geometric designs marry with paint splatter in the art that “Thank You X” (real name Ryan Wilson) has submitted. It feels heavily influenced by abstract art out of the 1980s. The geometric stencils are the core of, and foundation of, his art.

Indian sells some of the same design of tank covers as accessories in their online store, but these limited edition pieces of artwork must be procured through your local dealer. There’s no good information yet on pricing. I would guess by the existing tank covers that they’ll be north of $500 for a set. There’s no information on what the covers are made out of, but they could very well be plastic, since the “gas tank” on the FTR is in fact an airbox cover, and the gasoline itself is housed elsewhere on the bike.

If you have an FTR on order and any of these tank covers tickle your fancy, contact your Indian dealer post haste to reserve a set! 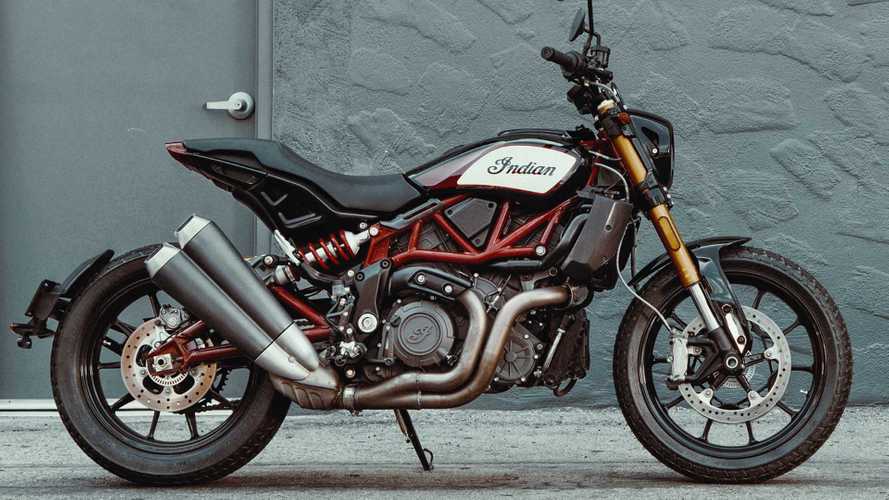