The Best Helmet That We Can't Have 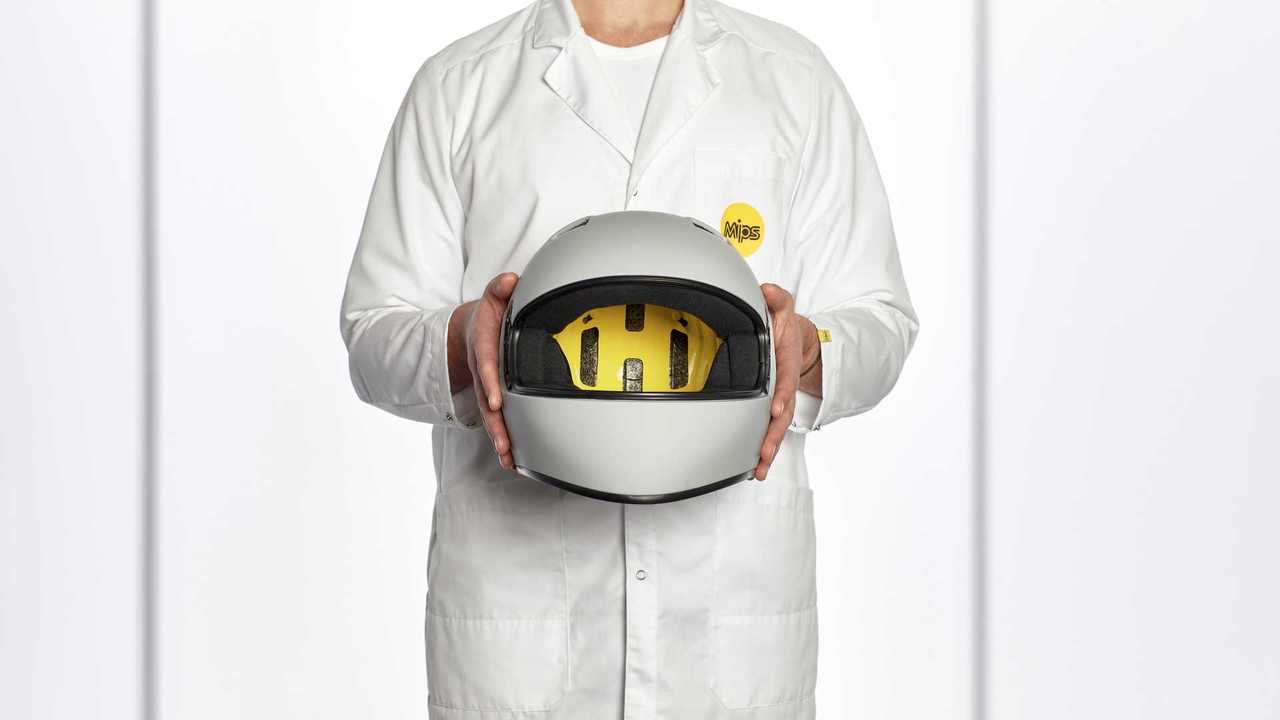 MIPS helmet technology could save our brains.

It is a thin yellow layer between the outer shell and inner foam lining of a helmet that could save your life as you know it, but motorcycle road and track lids don’t have it*. At this point in time 78 brands have MIPS in 448 different motocross helmets, bicycle helmets, alpine ski helmets, helmets for horseback riders, skateboarders, even ballistic helmets for police officers and soldiers, but only two for street riders.

Helmet Technology Uses Fluid Instead Of Foam To Absorb Shocks

When RA first wrote about Sweden’s “Multi-directional Impact Protection System” (MIPS) a few months back there was a question as to whether it might be more hype that help. After all, if it’s so effective at preventing injury, why hasn’t the technology been adopted by the professional race circuit, for one? MIPS contacted us almost immediately and offered to let their CEO at the time, Johan Theil, explain it more in detail.

This is your brain on MIPS.

Inside our skulls the fluid surrounding our brains protects it from sustaining damage if we suddenly trip and fall by absorbing some of the rotational force. However, that natural buffer isn't enough to absorb the more intense impacts sustained in a large number of high-impact sports and high-speed activities, so MIPS imitated that same sliding effect outside the head on the inside of helmets. MIPS explains: "The new design, which has a low friction layer between the shell and the liner, reduced, by up to 50%, the rotational acceleration of the head compared with conventional designs.” Simply put, when your head comes up against your helmet that contains MIPS safety technology, it will be able to continue its trajectory for a bit longer thus diminishing the jarring effects of a sudden stop at any angle.

In 1996, despite all the testing, legal regulations. and requirements that had led to helmets with highly specialized materials meant to protect riders from impact injuries, Swedish neurosurgeon and professor emeritus Dr. Hans von Holst was still treating riders and athletes for severe brain damage even though they had been wearing head protection at the time of their accidents. His frustration lead to collaborate with bio mechanics expert Peter Halladin and found a new research division at the university called Neuronics.

Together, they came to realize that although helmets were excellent at absorbing and re-distributing straight-on (aka: radial) impacts to the head, effectively protecting the skull from fracture, more often than not we hit the ground mid roll, which means that the strike is angled (oblique) as momentum is finishing up its curved (tangential) trajectory. When our heads come to a sudden stop in the midst of a rotation, our brains keep moving within the skull, which leads to concussions and cerebral tears that can cause permanent, irreversible damage. The MIPS energy management system gives your brain a fighting chance.

MIPS wonders if road motorcyclists might not care as much about their safety, or perhaps that they have a greater sense of invincibility in the face of potential (as opposed to inevitable) accidents-a surprising speculation considering the stats on motorcycle crashes. Another theory was that manufacturers might be under the impression that in that same spirit of thinking a crash is less likely, motorbike riders wouldn’t be willing to pay more for a better product. However, in a 2009 survey that measured price sensitivity 50 percent of the 1300 respondents were willing to hand over up to 50 percent more for extra safety.

Frustrated with the inaction of manufacturers, MIPS did make its own helmets, but it didn’t work out. The plastic they used for the neck retention system cracked in the cold and the massive recall almost ended the company, so they re-grouped and decided to work together with existing manufacturers to produce the best results.

“We want to save as many lives as possible.”

These were Mr. Theil’s closing words, and the driving principle behind MIPS and their dedication to having the very best protecting the future of any and all participants of high-impact sports. MIPS is not a regulatory body like SNELL, DOT or ECE but their data and technology are available to the Fédération Internationale de Motocyclisme (FIM) who are reexamining their safety standards and investigating the effects of angular velocity and acceleration, and since this governing body represents 113 national motorcycle federations, their opinion could change the tide and give consumers better access to improved safety.

How we really land.

In closing, an anecdote. Years ago, when I was visiting my elderly cousin we got into a debate inspired by her beautiful friend who was seriously ill with advanced dementia. Given the choice, would my cousin rather look good and be dependent, or be less attractive but retain all her capacities. Apparently my brilliant, successful, accomplished relative assured me she’d rather retain her looks and lose her senses.

The motorcycle helmet industry seems to agree with my cousin since they have decided on our behalf that we don’t care as much about our brains. For years they’ve had access to technology that can better protect our gray matter from damage, but haven’t offered us the chance to buy it.

MIPS wants us to ride and not worry that a crash could render us permanently brain-damaged and reliant on others for our basic needs. MIPS doesn’t want us to lose our freedom, the same strong impulse that gets us riding in the first place. They don’t want any of us to spend the rest of our lives among the living, trapped inside a dysfunctional shell.

Hopefully what can happen next is that, along with a shift in thinking at the regulatory level, manufacturers of our helmets will adopt all the best and more recent advances in helmet safety so that we can choose how we want to care for what matters most.

* Okay, there's one manufacturer with a few choices: BELL. They offer a couple street models that incorporate the MIPS energy management system. They also do a great job of explaining how MIPS works to absorb the rotational impact.

Thanks to MIPS' and Johan Theil for granting us an interview.