This beast made of spare parts will tackle any terrain and hit 70 kilometers per hour.

Some say that if you want something done right, you have to do it yourself. I wouldn't necessarily say that he's done it right, but YouTuber Alexander Kryukov has built a super sketchy scooter out of spare motorcycle parts, wheelchair parts, and a chainsaw that seems to perform amazingly well. 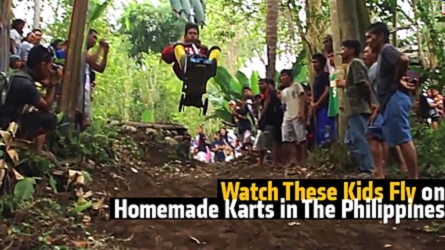 Watch These Kids Fly on Homemade Karts in The Philippines
⠀ 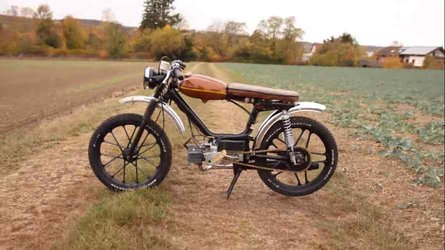 Drab to Fab: Watch A Moped Build Itself Into A Cafe Racer

Originally this scooter was some kind of homemade snowmobile. Don't ask. I don't know. It's Ukraine—actually Luhansk, a small breakaway republic that Ukraine has not yet managed to recapture. Perhaps this explains Kryukov's independent spirit. Anyway, the skis come off, a front wheel goes on, and the gas tank gets filled with an oil/gas mixture for its two-cycle chainsaw engine that propels the back wheel. It starts in a giant cloud of blue smoke. Kryukov takes it out on the road for a series of tests. There's absolutely no way this bike is road legal but in Ukraine, Luhansk, or wherever he is, who cares?

Naturally, the first thing you do on a sketchy, dangerous, homemade chainsaw scooter is a top speed run. The scooter has no speedometer, of course, but a pace car measures a top speed of 70 kilometers per hour or about 44 miles per hour. That's super fast, especially for wheels intended for a wheelchair.

Thanks to its massive levels of horsepower, the rent-a-wreck can do great wheelies and burn massive donuts, at least in the sand. This leads to a test of off-road riding, where the shock absorber scavenged from somewhere actually does a good job smoothing out the rough ride.

The test isn't without some minor setbacks. The vibration in the solid-mounted chainsaw motor causes the spark plug to break during the burnout session. Similarly, rough conditions off-road lead to the chain falling off the rear sprocket. Both of these problems are easy to repair, though. Kryukov adds a front fender from an old moped to help keep dirt from flying into his face, as well as a skid plate and brush guard made of part of an old bike frame.

Shenanigans continue, including a race between Kryukov's monstrosity and a Honda Dio scooter. Amazingly, likely thanks to the homemade scooter's low weight, the Honda loses. Then it crashes for no apparent reason.