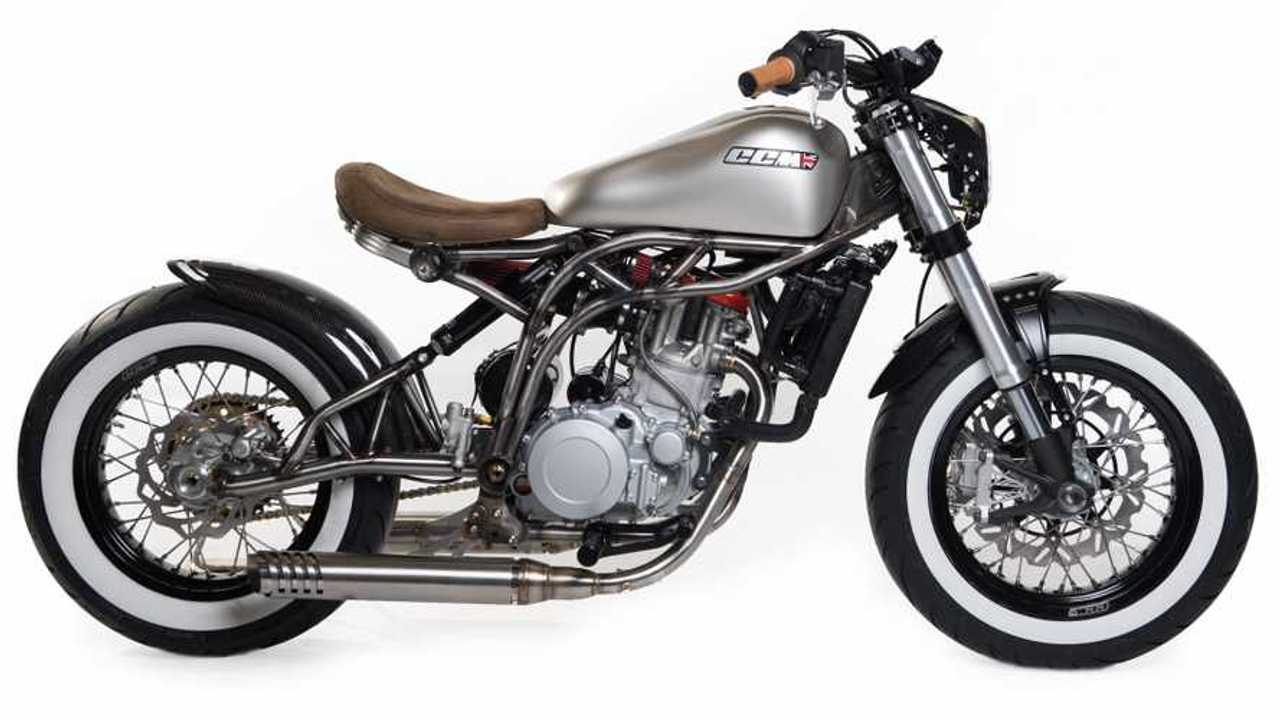 The original Spitfire was so popular it expanded into an entire line of bikes.

In 1970, BSA refused to sell amateur racer Alan Clews one of its factory race bikes. In response, Clews said "screw you guys" and founded Clews Competition Machines, better known as CCM, to build his own. Clews and his family have been building racing and street bikes ever since.

Fast forward to 2016. Over a bacon sandwich on their tea break (seriously), a bunch of CCM designers and mechanics had a fun chat about what sort of bike they would build if CCM wasn't focused on building the GP450 Adventure. CCM's chief designer took the ideas from this unintentional brainstorming session and ran with them, designing a motorcycle that incorporated all these ideas. Management liked the end result so much they brought back Ted Unwin, one of Alan Clews' former builders, to turn these sketches and CAD plans into reality.

CCM established its SkunkwerX division, named after the rather similar division at Lockheed Martin that produced such radical and successful airplanes as the U-2 and SR-71 Blackbird. SkunkwerX went on to build the CCM Spitfire. CCM sourced the engine of a Husqvarna TE630 and built its dream bike around that. Its frame was made of T45 high-strength British steel, the same steel used to build the Supermarine Spitfire fighter plane in World War 2. The bluing of the steel around the handmade welds, usually considered an imperfection, is left exposed as a unique styling element. Despite its simple, if unusual, appearance, it used highly advanced components, such as adjustable upside-down forks and an adjustable mono-shock by WP along with beefy Brembo brakes.

The original Spitfire was so popular that its limited run of 100 motorcycles sold out in the first week after it was announced. Based on that initial success, CCM is now producing an entire Spitfire product lineup. All of them are based on the original Spitfire design, but each is customized to a particular look and feel. The Spitfire Cafe Racer, for instance, has no fenders, a different seat, and number boards on either side to enhance the look of a bike designed to race from one coffee shop to the next. The Spitfire Scrambler, on the other hand, has an elongated seat and high-mounted fenders, with an exhaust that runs just below the seat to keep it out of the way of flying rocks and dirt.

The Spitfire Flat Tracker draws its inspiration from short track racing, with smoother lines and tires for pavement rather than dirt, as well as nicely integrated number boards. The Spitfire Bobber, in contrast, features classic white-wall tires, a larger round headlight, and little else. It is as stripped down as it can be like any classic bobber. Finally, the RAF Benevolent Fund Spitfire goes all the way with its fighter plane inspiration. It has square leather saddlebags like wartime courier bikes. The paint resembles different Spitfire fighter styling cues from throughout the war. CCM also works an actual piece of a Spitfire fuselage into the motorcycle somewhere. Like the original Spitfire bike, CCM will only build 100 of this special edition to commemorate the 100 year anniversary of the RAF Benevolent Fund.

The CCM Spitfire is the perfect example of a dream come true. Even better, its design has proven flexible enough to be the foundation for a wide variety of bikes. I doubt I'd ever hit the dirt with a Spitfire Scrambler or take a Spitfire Flat Tracker to the track, but they look like they could handle it with no problem if I did. The Spitfire series is what happens when a company lets its designers and engineers run amock without the traditional tie-downs like "this is how it's always been done." Creativity breeds innovation, and that's what makes the Spitfire series so great.