Watch This Motorcyclist Run Down a Carjacker 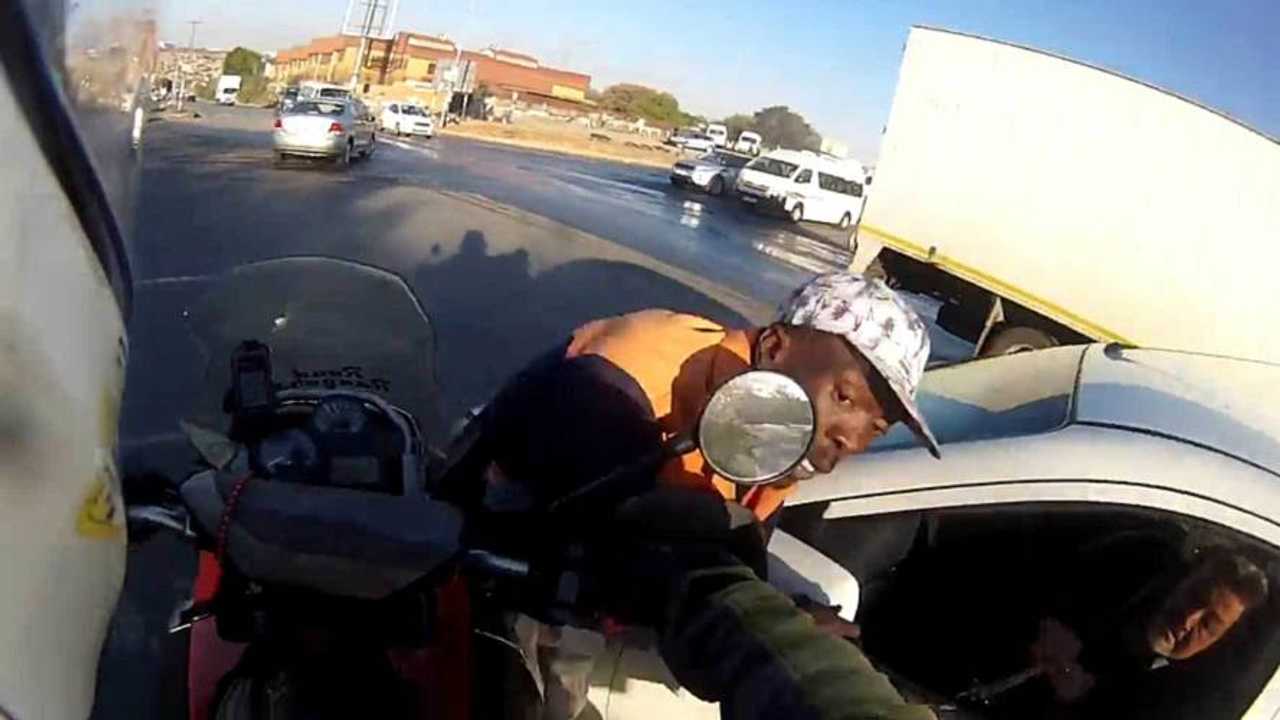 It's not an exaggeration to say that carjacking is kinda out of hand in South Africa. Back in '07, a big insurance company stopped insuring VW Citi Golfs because they were the most carjacked vehicle in the country, and a lot of high-risk areas are marked with signs warning drivers to look out for carjackers. After all, this is the country that invented the Blaster, a side-mounted flamethrower for BMWs to deter carjackings. In short, South Africa's kind of a hot mess. To illustrate this point, let's have a look at a recent video wherein a motorcyclist comes to the rescue of a carjacking victim.

On September 10, 2018, Anton Damhuis was cruising home on his Beemer along a busy street in Alexandria, South Africa, when he came upon a crime in progress at an intersection. A man on foot was leaning in the window of a stopped Ford Focus wagon fighting with the driver. The man grabbed a laptop bag out of the car and tried to run for it, but Damhuis was too fast for him.

Swinging into the right lane, he ran his Beemer square into the crook and knocked him over. The laptop thief got up and legged it, but Damhuis stayed hot on his tail. Eventually the thief dropped the bag on the street and took off, so our hero picked up the bag and returned it to the stunned Focus driver. The best part? Damhuis caught the whole thing on his helmet cam. All's well that ends well, right?

Damhuis posted the video on YouTube, and some of the commenters were less than impressed with the driver's attitude toward his savior. When you watch the video, the man in the Focus does seem a little brusque, but we'll cut him some slack. He did go through a pretty shocking experience. Eventually, someone by the name of Phillip Coetser showed up in the comments claiming to be the man in the Focus. He had this to say,

"My friend, I was the man in the car and I want to really thank you for intervening. Sorry I did not thank you yesterday, but I was in a bit of a shock. I eventually ran over him with the car (and unfortunately my laptop). Pity you did not see that 'cause I think you would have enjoyed it. And the dent in the car is a minor price to pay for my safety and protection. I am not sure what gave me the biggest shock... the man stealing the laptop or me physically driving over him. Being in the middle of Alex(andria), all I could think of was getting out of there! God willing my path will cross again with that of the biker, hopefully under different circumstances, and then I will make sure that he knows that I really appreciate him putting his life in danger to help me."

Good on Damhuis for intervening.