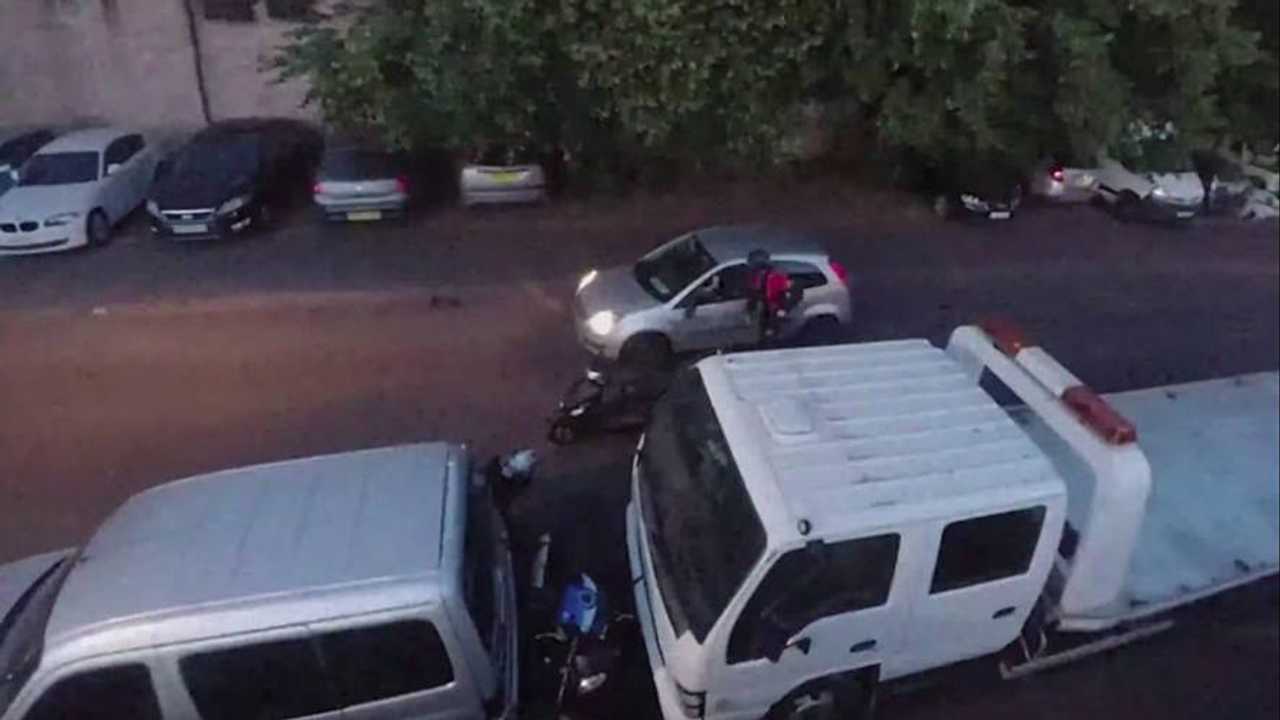 What do you do when you spy a couple London bike thieves stealing a bike? If you're this bloke, you hit 'em with your car!

What goes around comes around and runs you down

When we are the witness of an illegal situation, we are left to decide whether to intervene or not. While some of us have cojones of steel and will interfere without a second thought, most people probably prefer to remain safe and let the police handle it. Not this guy and a bike owner somewhere owes him a beer.

ALL IS WELL THAT ENDS WELL: Good Friends, Cool Nerves, Save Stolen KTM Motorcycle in NYC

The scene unfolded under the watchful eye of a security camera located in London, UK. Two people can be seen zooming down the street on a scooter before disappearing. Something seems to catch their attention because roughly twenty minutes later, the pair can be seeing retracing its steps back and stop in the middle of the road. The target: a motorcycle tightly parked between a truck and a van. Looks like they won't have to share a ride anymore!

WE ALL THOUGHT OF DOING THIS: Motorcycle Thief Takes Tennessee Bikes on Extended Test Rides

The passenger on the scooter jumps off and walks up to the motorcycle before starting to fiddle with it while buddy dirtbag is keeping watch. Only a few seconds into their mischief, a little car pulls up and slows down as the driver notices the two weirdos standing there toying with a bike, something he probably understood as not being kosher.

The driver steps out of the vehicle but is met with aggression as the scooter rider grabs an unidentified blunt object and proceeds to threaten him with it. The latter gets the message and gets back into his car, not without suffering some damage as the rider smashes the car's side view mirror, probably trying to show the intruder he means business.

The car drives off, but the driver's courageous interruption did discourage the thieves from pursuing their endeavor. The rider jumps back on his scooter and with the help of Fiddle McFiddly, turns the scooter around and tries to get it to start to drive away.

Now according to the laws of physics, the mass of a car is superior to that of a scooter, and the anonymous crusader uses it to his full advantage. He reverses at full speed into the struggling scooter, knocking it to the ground. Turns out the driver also had a blunt object perfect for intimidation. Both thugs manage to run away from the scene while the driver, on his phone, steps out of the car to check on the bike.

Karma has this funny way of coming back to bite you when you cross it.