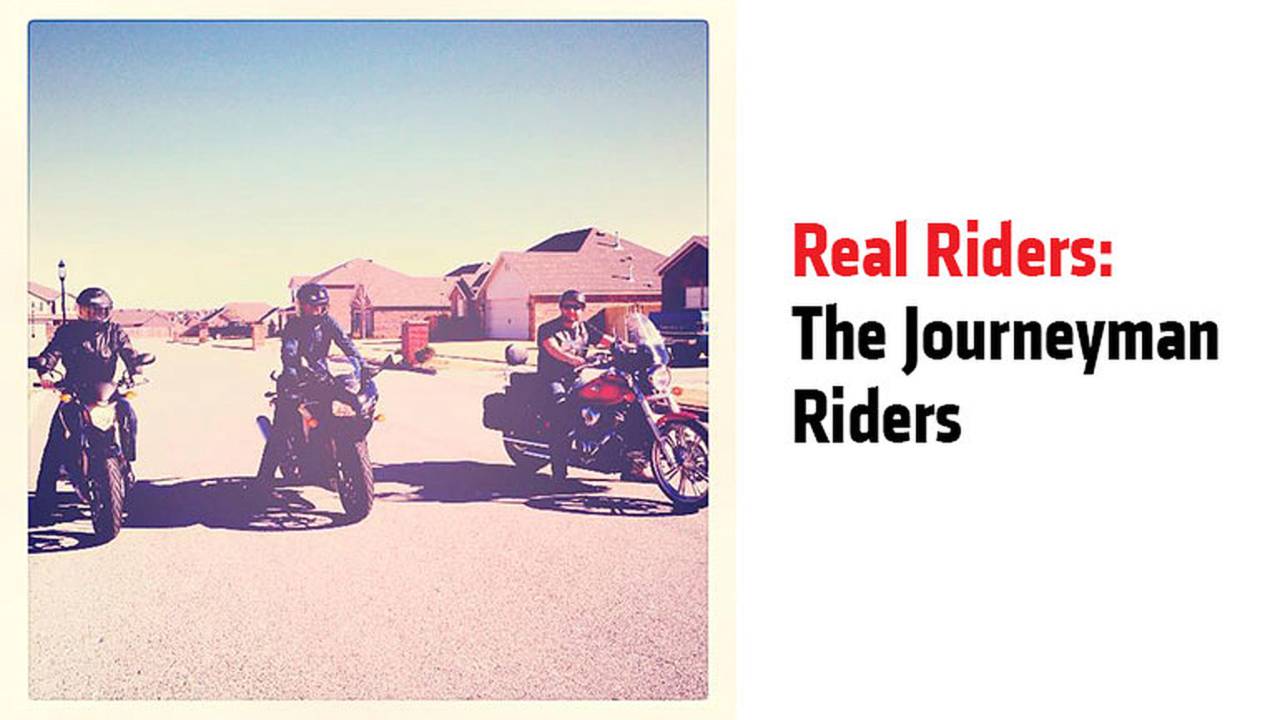 Our latest installment of Real Riders featuring the Journeyman Riders.

My group of riding friends are an eclectic bunch to say the least. Most of us have been friends for years. We all bought our bikes within the past three years, and it's really interesting to see what everyone came up with when left to their own devices. Together, however, as the Journeyman Riders we are all after the same thing – the ride.

As luck would have it, we live in an area that has absolutely phenomenal roads. With Push Mountain, Highway 23 (Pig Trail Scenic Byway), and literally more forested and mountainous empty highways through national forests than you can shake a stick at within 200 miles, we managed to live most of our lives in prime motorcycle country without even realizing it.

Zach was the first to take the dive into riding on the street. With Bikes, Blues and BBQ being hosted in our area, he was bitten by the cruiser bug. He was a beard and boots kind of guy long before he purchased his 2010 Kawasaki Vulcan 900. The gear he rides with might be as stereotypical "cruiser guy" as you will find.

He wears an Outlaw Ultra Slim Carbon (yes, the one that the DOT decided wasn't actually approvable after release) when the weather permits and a GMax GM38 when it doesn't, or when his wife wants to put his sissy bar through its paces. He is a t-shirt and jeans kind of guy , and he dons pair of safety glasses I think I wore in biology class in high school.

He loves highway 23 because it is a good mix of breakneck straight-aways and never-ending-apex corners that aren't too tight for a lumbering beast to break a sweat. Interestingly enough, he has spent the past 6 months or more pining for a BMW GS. He has always been an avid outdoorsman, and after getting a taste of something meant do to more than go in a straight line, our bikes, I think he has finally seen the light!

Next up is Josh. We've known each other the longest of the group. He and I were in the bike market at nearly the same time, so there was a fair amount of collaboration in the decision making process. He was dead set on a faired sport bike when he was a kid, and had all but settled on a Kawasaki Ninja 300 until I introduced him to the 2013 Honda CBR500 that he would eventually buy.

Josh purchased a Bell Revolver helmet with a Sena SMH10R on the side. He trusts his digits to a pair of Icon Overlord Resistance gloves. While I don't necessarily understand the logic behind wearing nice armored gloves and a soft shell from "insert local outdoors shop", it's not my place to spend the man's money.

Josh is comfortable on just about any road we've ridden together, eight lanes or two. He does seem to prefer our jaunts over to Siloam Springs via highway 102 and 59, though he also enjoys gambling on the Oklahoma side of the line, which could be a factor. He has fallen in love with his Honda, and is hoping to convince his wife to grant him an upgrade to the new CBR650F as soon as he can.

Third in line is the youngest of the group, James. He's a mechanic, paramedic, fire fighter and soldier. If I remember correctly, James has gone through about 10 cars in 10 years. Luckily for him, he is vastly more subdued without the cage. As his introduction implies, he wanted something a bit more sporty for his first ride so he went with a used 2007 Yamaha ZX6.

James wears a Nolan N90S helmet. He liked the idea of adding a "doesn't stick out" communication system, and I don't blame him. His choice of jacket is the Teknic Freeway HP. He also wears a pair of Speed and Strength Rage with the Machine gloves.

James, like Zach, is more comfortable on the straights. Having ridden his FZ6 for a few stints, I understand why. Compared to the CB500's smooth predictability, it feels pretty twitchy. He by no means refuses a challenge, but when we find a road that is 75% straight, he appreciates the ability to twist out some power. I would say that James will probably keep his FZ6 for quite a while, but he has expressed an interest in the small side of the GSX-R lineup.

The fourth entrant into the mix is JC. He rides every day there isn't snow on the roads which makes sense, since it is his only mode of transportation. What makes this even more interesting is that he rides a 2014 Yamaha FZ09.

JC dons a Speed and Strength SS1500 Solid Speed helmet, which he spray painted hunter green for reasons unbeknownst to me. To add to his feat of winter riding, he wears a Joe Rocket Phoenix jacket year round. He does wear a hoodie under it when the temperatures dip below 30 degrees Fahrenheit (seriously, this guy need a show with Bear Grylls). He wears Joe Rocket Moto Air gloves and adds some liners for when things get frozen.

In terms of roads, JC is definitely a Pig Trail fan. It offers every kind of twist, turn, and straight-away anyone could ask for, and there are spots where his hunter green helmet provides camouflage. He is the most speed comfortable among us, and likes to play the drop back then pass you all game. If I were in a yearbook voting panel, I would vote JC as the "Most Likely to Purchase a Liter Bike". He has been pining for a Ducati Monster, and we all hope it's something on the smaller end of the line.

I, since I can remember wanting to drive, have always wanted a motorcycle. Unfortunately, I heard the "you'll shoot your eye out" line more times than I care to remember. Almost exactly a year ago I got married, and, to my surprise, she was on board! I went out and bought myself a 2013 Honda CB500F.

In terms of my preferred roads, it's a tough choice. Honestly, I can find something to love about any road that isn't awash with SUVs and lets me see a bit of nature. Luckily, living in the natural state, I'm hard pressed to be more than 15 miles from a scenic byway anywhere I go. While I love naked bikes, my neck isn't as fond of them on high speed 100+ mile road trips. My heart wants me to buy a Triumph Street Triple, my brain wants me to get an FZ09, but every time I see Marc Marquez dominate a GP circuit, I get a burning desire to own a fully faired sport bike (maybe even orange). Hopefully one of these days I will be able to justify two bikes, and I may just join Zach on some ridiculous trip on a pair of BMW GS's!