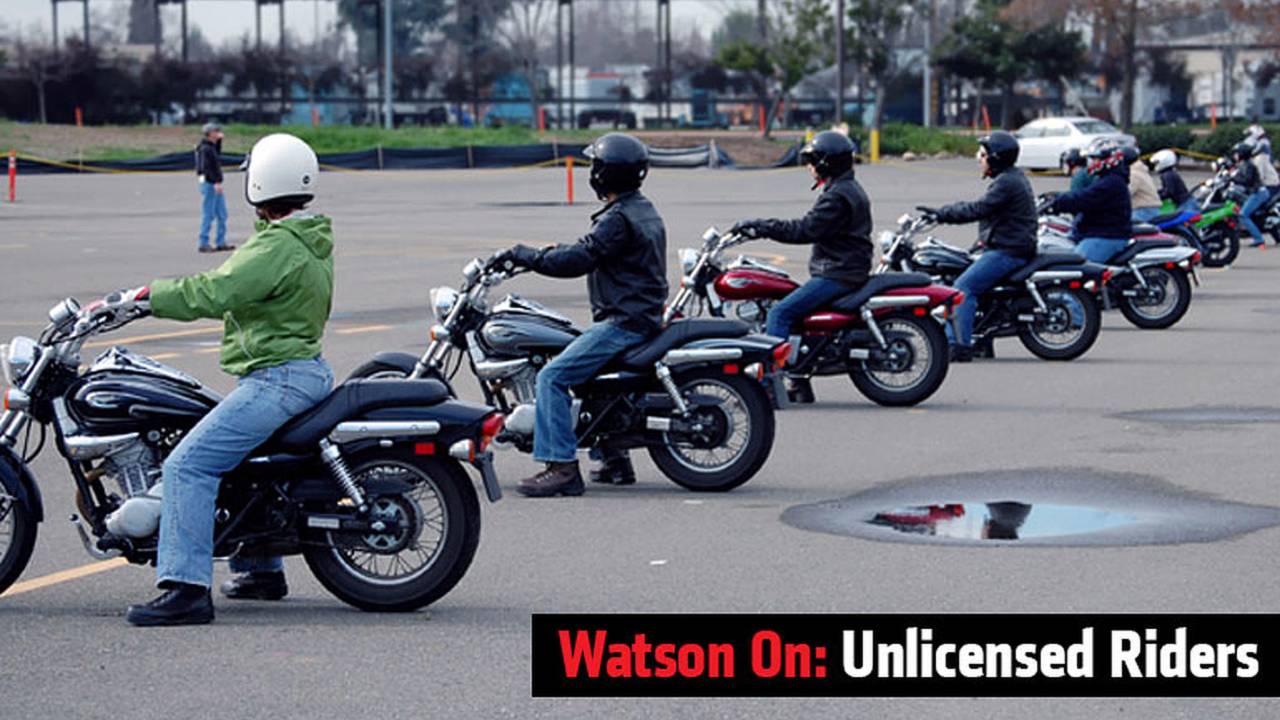 May is Motorcycle Safety Awareness Month and one of the biggest issues, aside from texting drivers, is unlicensed riders.

You probably didn’t even know this but this week marks the start of National Motorcycle Safety Awareness Month across the U.S. for the month of May. Come to think of it I’d forgotten about this annual event too.

For all of May, road users are being asked to “share the road” by the Government’s National Highways Traffic Safety Association (NHTSA) and it reminds them to keep an eye out for riders in order to “help prevent crashes, deaths and injuries”.

This campaign has been running for several years now and while I accept its intentions to be entirely honorable it doesn’t actually get to the root of the problem and address why more riders are increasingly dying on the roads of the U.S. than ever before.

For me, National Motorcycle Safety Awareness Month will do little to alleviate the real problems, as neither motorcyclists nor other road users are entirely free from blame.

But if you go back one year to the full NHTSA report on motorcycle safety, almost one in four riders involved in fatal accident did not have a valid license. The reason? Well take the state of Wisconsin for example where in 2012, 116 riders were killed, yet of those a staggering 43% of those fatalities were unlicensed riders. Greg Patzer, manager of the Wisconsin Motorcycle (WMP) Program says that there could be thousands still out there at risk and unlicensed.

WMP’s research into why the numbers are so high suggests that some motorcyclists, who have been riding for years without a license, could be embarrassed to take a basic safety course with younger classmates who are beginner riders.

Many middle-age men are getting back into the sport after decades of being off a bike, and they don’t feel the need to update their riding skills or take tests About eight out of ten Wisconsin residents with a motorcycle endorsement are men, so male pride could have something to do with not taking a safety course suggests the WMP.

"If someone has been riding 20 years, and they've logged a lot of miles but still don't have their motorcycle endorsement, the likelihood of them wanting to take a basic rider's safety course is low. They aren't going to want to do it," said Patzer.

So rather than embarrass yourself by learning how to ride a motorcycle the better option is to take the risk and ride without a license and potentially kill yourself?

Underlying NHTSA’s May safety campaign are statistics that demonstrate that helmet use is on the decline in the U.S. with 66 per cent of wearers in 2011 to 60 percent in 2012 with the biggest decrease amongst motorcycle passengers (64 per cent in 2011 dropping to 46 per cent in 2012). NHTSA claims that 701 lives could have been saved in 2011 if a rider had been wearing a helmet. It’s hard to get the facts behind these numbers, such as the nature of the accident and other contributing factors, so I will Have to take NHTSA’S word for it.

Over in the other camp, of the ‘other road users’, NHTSA is urging them to give motorcycles more space, signal when changing lanes, check your mirrors and allow more following distance behind a bike – three to four seconds is what it recommends. Car and truck drivers, it says, should also not drive impaired or distracted. There is no specific mention of the bane of most motorcyclist’s life – a car driver using a cell ‘phone or texting. Don’t forget this is not a year long campaign, Motorcycle Safety Awareness only runs for the month of May and then everything, I assume, returns to normal.

My point is this. As I said at the outset while NHTSA’s intentions for May are laudable for turning the spotlight on to motorcyclists, I feel it’s missing the point. Wouldn’t the month’s campaign money be far better spent on offering all new and returning riders free training courses across the U.S. so we don’t have a repetition of 2011 where nearly a quarter of all U.S. motorcycle deaths involved unlicensed riders?