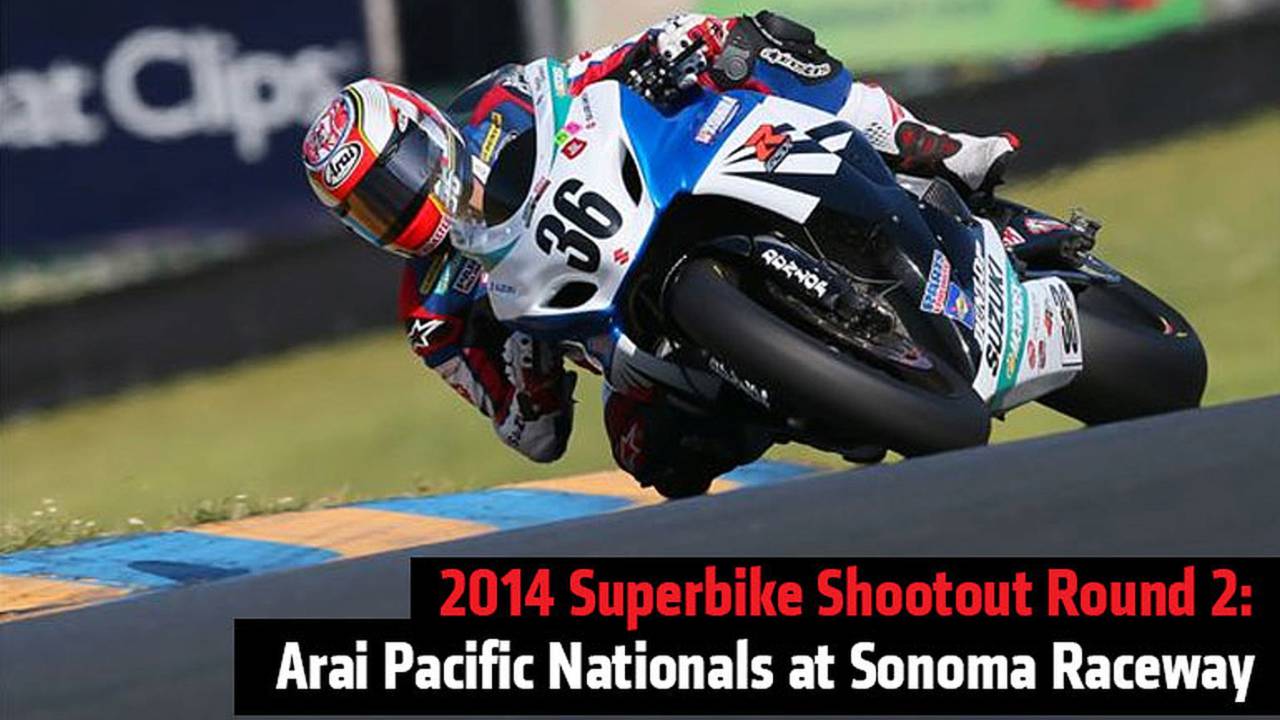 Round 2 of the 2014 Superbike Shootout is in the books and it was even more thrilling than Rond 1 just the week before it.

The second stop of the three-round 2014 GEICO Motorcycle Superbike Shootout series headed up to wine country in Northern California over the weekend as race teams took over the legendary Sonoma Raceway (formerly Infineon and Sears Point).

As the oldest motorcycle club racing organization in the nation, the American Federation of Motorcyclists (AFM) had no problem hosting this national event. With growth in popularity stemming from the first round at Auto Club Speedway in Southern California the weekend prior, Arai Americas helped back this episode officially titled the Arai Pacific Nationals round of the GEICO Motorcycle Superbike Shootout presented by Yamaha.

Reminiscent of the scene in Fontana one week ago, walking the pits of Sonoma Raceway was an extremely interesting experience. The full-size factory transport rigs of Y.E.S. Monster Graves Yamaha, Geico Honda and Yoshimura Suzuki Factory Racing peppered the parking lot surrounded by privateers and local race teams alike with their motorhomes, pickup trucks and beat-up panel vans.

Walking down the pit rows had the added element of excitement attempting to dodge everything from little Timmy on his long board to Darius Khashabi on his two-stroke pit bike. During the lunch break, novice club racers waited in the Dunlop tent alongside pros such as Bobby Fong and Eric Bostrom as everyone scrambled to get their new rubber mounted before qualifying and racing began later that day. Even the bathrooms proved to be a venue of interest as Martin Cardenas discussed his suspension setup with a local fan. This unique blend of motorcycle racers, enthusiasts and supporters from a variety of backgrounds made for another racing event unlike any other.

Saturday qualifying kicked the weekend off with some extremely hot times turned by both factory built machines as well as a few primered rides piloted by local fast guys. The AFM encouraged all of their expert license holders to participate in the Pro Sportbike and/or Superbike races as long as they ran the AMA-spec Dunlop D211GP-A tires and Sunoco GTX260 spec race fuel. Sportbike times dipped into the 1:38’s thanks to Garrett Gerloff on his Monster Graves Yamaha YZF-R6 while Cameron Beaubier put up a 1:36.156 on his YZF-R1 approaching the lap record held by Ben Spies. Technically, all riders were required to post times within 108% and 107% of the pole in Sportbike and Superbike respectively (roughly 1:47 and 1:43) in order to qualify for each race but the AFM graciously gridded all riders who turned sub 1:50’s in qualifying making for a very diverse race field.

Racing on Sunday began with AFM classes ranging from Novice 250 Production to Open Superbike.  The first Superbike Shootout main event was the Dynojet Pro Sportbike race. Gerloff led the pack from the pole position for the majority of the race. Bobby Fong threw his Latus Motors Racing Triumph Daytona 675R ahead of Garrett for a couple of laps only to be overtaken again by the number 8 of Gerloff on the second to last lap. The battle for third saw some serious drama as Jake Zemke lost the rear end of his Geico Honda CBR600RR in the slick area on the inside of turn 3. Hot on his tail, Joe Roberts and Benny Solis also lost traction in the same spot sending a bike into the back of Zemke’s throwing him into a high-side and ending the race for all three though not seriously injuring anyone. When the checkered flag was flown, Gerloff took the win followed by Fong in second with Moto West GP club racer and up-and-coming pro champ Bryce Prince on his Tuned Industries Yamaha YZF-R6 in third.

The RaceFuelz Pro Superbike race was slightly less eventful with Cameron Beaubier running away with the win from his pole grid position. Nearly 10 seconds behind, Beaubier’s Monster Graves Yamaha teammate, Josh Hayes on his matching YZF-R1 took second followed by Matrin Cardenas on the Yoshimura Suzuki GSX-R1000 in third after another 10 second gap. This puts Cameron in the championship lead by four points going into the final

Superbike Shootout round at Miller Motorsports Park in Salt Lake City, Utah on May 25th. The Sportbike championship on the other hand is all tied up between Bobby Fong and Garrett Gerloff headed to Utah for round three. This unique series has proven to be one of the most exciting events organized in recent US motorcycle roadracing history and the final showdown at Miller should solidify this notion.