Less than a week ago, Motociclismo.it teased us with with a leaked Ducati 1199 photo. Since then, there has been much speculation about every detail of the bike. Now that Motociclismo has published more shots, we can start to make more educated guesses about the bike. Immediately obvious is the LED headlight that we saw last week. Taste is subjective, but if I had to describe it, I'd say that i...

Less than a week ago, Motociclismo.it teased us with with a leaked Ducati 1199 photo. Since then, there has been much speculation about every detail of the bike. Now that Motociclismo has published more shots, we can start to make more educated guesses about the bike.

Immediately obvious is the LED headlight that we saw last week. Taste is subjective, but if I had to describe it, I'd say that it looks like a VFR 1200 and a 999 had a kid, and then that kid had another kid with an 1198. While still sharing the same basic front-end layout of the 916/996/998, it drastically changes the shape of the side-by-side dual intakes and headlights. I get the feeling that the aerodynamicists and engineers would have preferred a completely different head-light and intake arrangement but were over-ruled by the stylists. Why would the designers insist on a design that continues to echo the 916? Because nearly every other signature Ducati detail has been changed.

Ignore for a moment the shiny anodized preload adjusters, pretty triple clamp, funny key, adjustable steering head and strange switch gear. The key, for example, will almost certainly not be there on the production bike. Ducati would be crazy to leave their flagship superbike without a keyless ignition when they're already using that technology on the Diavel and Multistrada. The adjustable steering head is nice, but it's not something Ducati hasn't done in the past. The real story in this ugly photo is nearly impossible to see.

The 1198 is the last of a long line of trellis framed Ducati superbikes. That design has had a good run, but there are better technologies available. No, it's not being replaced with a carbon frame. The motorcycle would cost a zillion dollars and the controversy would be incredible. Could you imagine being the first company to mass-produce a carbon framed motorcycle? Bimota has used carbon structurally, but never built an entire frame and they're not exactly mass-producing bikes either. Ducati is a larger company than them and they have experience with carbon frames in their GP bikes, but they're not a giant like Honda or Kawasaki. It would be extremely risky for them to be first on the scene with something completely new and revolutionary like that. What if they had a problem that required a recall like the infamous 2005 GSX-R 1000 frame did? Replacing the frames on all the 1199s built up to that point would be extremely expensive proposition.

Instead, Ducati has gone the way of everybody else. It's not very exciting, but if literally everyone else is building a competitive superbike is using an aluminum frame, there have got to be good reasons for it. It's too early to tell, but it appears that they've taken the stressed airbox idea and executed it in aluminum. The advantages aren't as large or as numerous as you might imagine, but there are advantages.

The two that I can identify are size and weight. No frame means a smaller overall package, which it turn makes for more options when it comes to rider ergonomics, bodywork and gas tank. The weight advantage is likely minor, a few pounds at best. Still, every last ounce counts. The light-weight aluminum framed superbikes of today didn't just spring out of nowhere and this represents the latest and greatest in frame design.

The purists may bemoan the end of the trellis, but this is definitely a step forward. Why haven't the giants of Japan tried this yet? An inline four-cylinder is shaped quite a bit differently than a V-twin and there would be little to any advantage in replacing the back half of the frame with an extra long subframe to hold the tail and rider up. The long and narrow shape of Ducati's new V-twin is what makes this possible. Connect the front cylinder head (possibly the rear as well) and crank cases to the steering head to support the front of the bike then build a small subframe to prop up the rider. Going through the trouble of engineering a lean racing motorcycle with a minimalist frame and then building a tail section strong enough to support a passenger would seem silly. I would bet that they'll build monoposto and biposto versions of the bike. 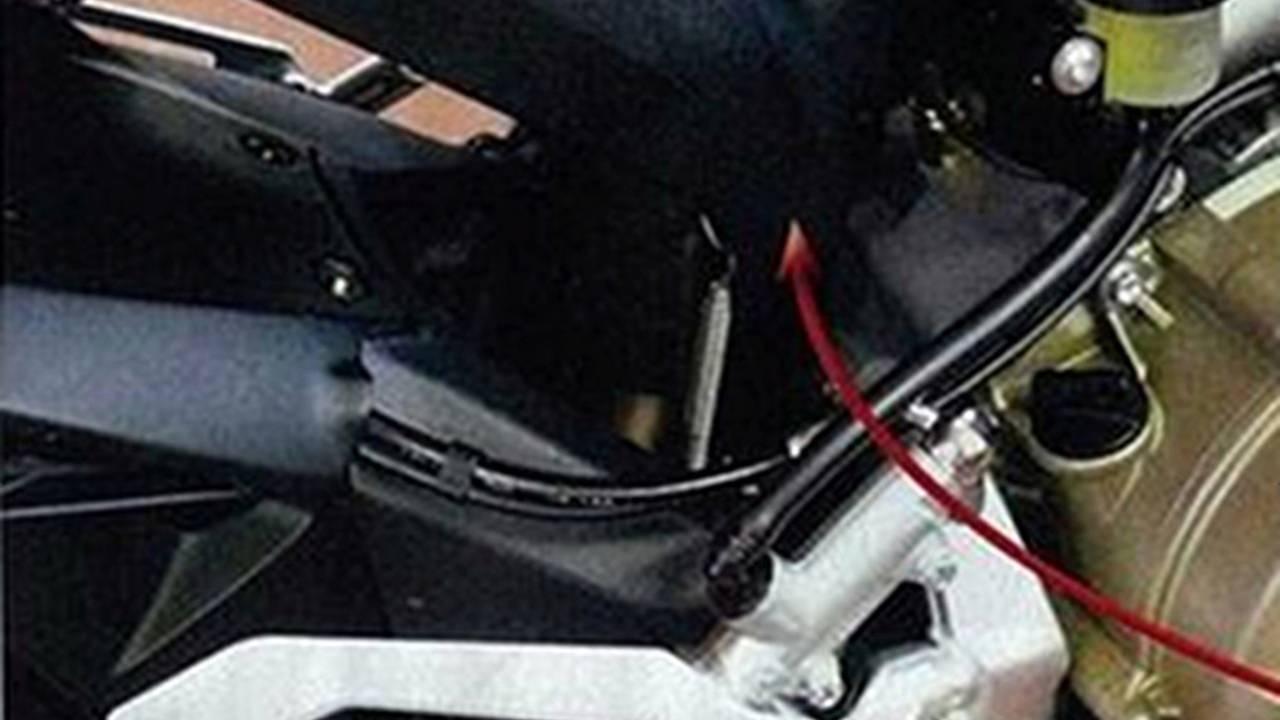 Speaking of that tail, some people are also guessing that this plastic cover is covering up a second exhaust exit, but I highly doubt that. Why not have awesome twin outlets like the GP bike? The GP bike is a V-4 and makes more than 230 hp. This is a V-twin making at least 50 hp less than that. Think about that for a second. That's 50 hp less exhaust gases to move. What then, would be the point of having a second heavy muffler in the tail section? Another clue here is the pipe visible in the lower left corner of the photo. If it's not connected to the rear cylinder, that would mean it's coming all the way from the front pipe to go up into the tail section. Unlikely, especially considering that we know for certain that there is an under engine exhaust. It would also make no sense to have a pipe from the rear cylinder first go down underneath the motor, then come back up and go into the tail.

What then is that piece of black plastic that appears to be a heat shield? It's probably a heat shield. When Yamaha built the reverse cylinder YZ450F, they designed a curly-Q pipe that fit under the seat, next to the shock. Having the correct length and diameter pipe is crucial to making horsepower and Ducati would have a hard time fitting all that length for both the front and rear cylinders, plus the catalyzer and muffler under the motor. Why not use the space under the seat for a loop of rear exhaust pipe to save space elsewhere? 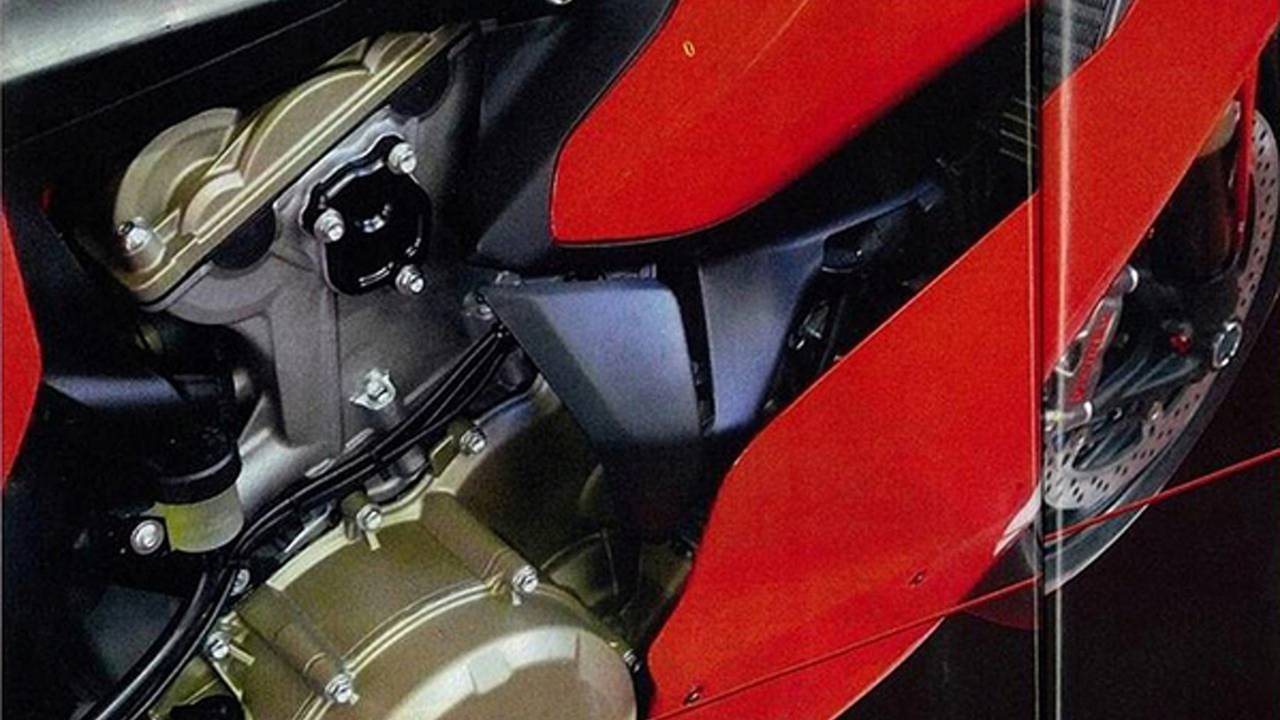 Finally, we come to the motor. Gone is the old testresetta architecture that had it's roots in the 916. In it's place is a motor that looks like it should have orange details and 'Made in Austria' cast into it's crankcases. You may have noticed me calling it a V-twin earlier and that's because the motor has been tilted back. This means a shorter overall motor, the possibility of a longer swingarm, easier packaging of the cooling system and less chance of the tire meeting the front valve cover under hand braking. Belts are replaced with chains that lead to a gear system in each head like KTM uses on some of it's twin-cam MX motors. 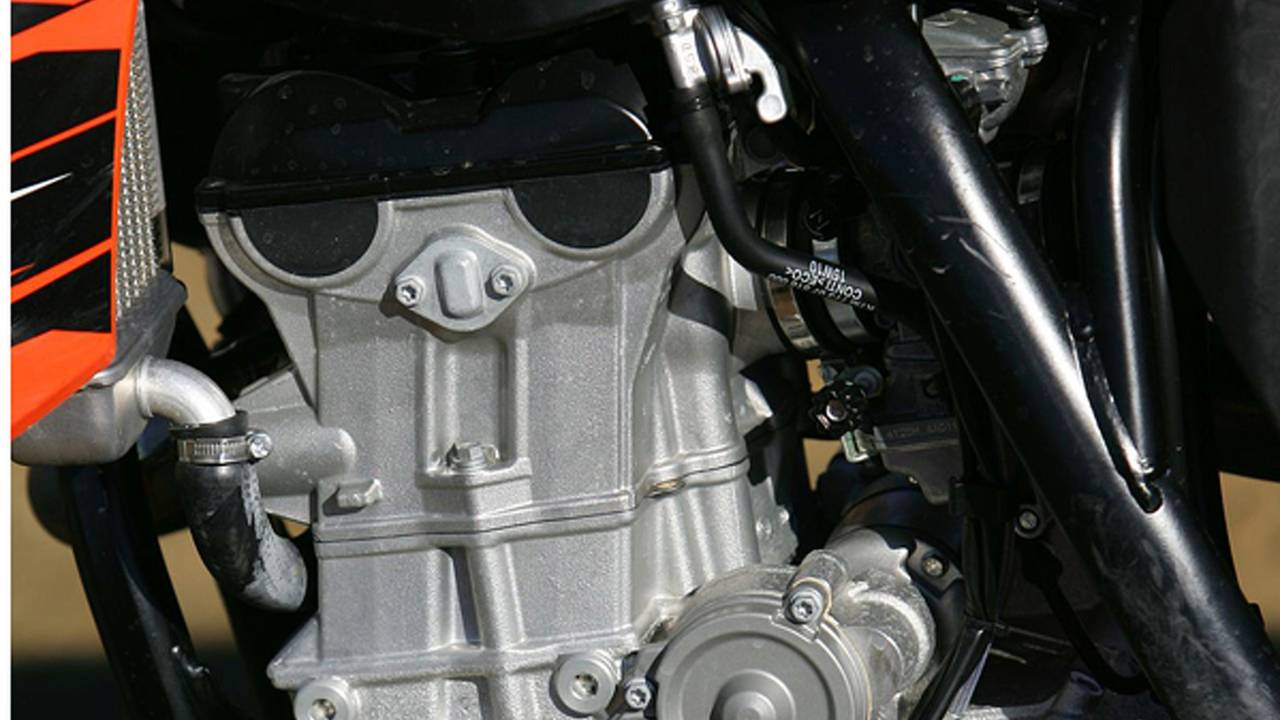 This is a much more compact system than belts or even traditional cam chains and follows the minimalist theme of the bike. Also gone are the 5 seals of the belt drive system-all of which will eventually wear-out and leak. Yes, this also means a lost opportunity for bling in the form of fancy belt covers and pulleys.

The dry clutch has been replaced with a standard wet clutch, just like the one in every other performance bike. Before you scream and yell but the GP bikes use a dry clutch so there must be a performance advantage, hear me out. First, that's at least one less oil seal around a spinning shaft and a large spinning shaft at that. You'll never have to replace a leaky clutch seal and you'll never have oil anywhere near your dry clutch. Second, GP bikes burn up a set of clutch plates pretty fast. Remember the bit earlier about the hp difference? It applies here too. The clutch in a GP bike only needs to last for one good launch and 26 or so laps. They change those things like tires so it makes sense to have an easily accessible clutch pack that can be swapped out in seconds rather than one that requires laying the bike on it's side or draining the oil to remove. Third, people will stop telling you your bike is broken and that rattle will be mostly gone. Yes, it's one of those signature Ducati things, but so were the trellis frame, L-twin engine, belt driven cams and lean italian performance motorcycles. This is another lost opportunity for bling.

Now that I've explained how many signature Ducati features have disappeared, it makes perfect sense why they decided to stick with the 916-esque headlight and intake combination. They could have made better use of ram-aim by positioning the intake at the center of the front fairing, where the highest air pressure is (ever notice where GP bikes put the intake?), but that would mean a bike completely unrecognizable as a Ducati.

The motor, frame and exhaust are the major changes for the 1199. Everything else is secondary to them. Still, many other things have changes as well. The shock has been repositioned, likely to clear room for the rear exhaust. The first guy to make anodized shock accessories will make a killing. There are funny gills in the intakes (like the new GSX-R 600/750) and holes in the upper fairing next to the screen (like the S1000RR). Do either of those features actually do anything? Who knows. The same can be said for the triple clamp, switchgear and LED headlights. They're all interesting to look at, but it's hard to say whether or not they really affect the performance of the bike.

Other areas they'll have something unique and competitive are ergonomics, maneuverability and line-selection. Inline-fours are necessarily wide engines that require wide frames and house wide crankshafts. Those wide crankshafts carry quite a bit of rotational inertia when they're spinning at 14,000 rpm and that makes the bike slow to change direction.

This is the reason the 560lb, 1200cc Moto Guzzi Norge steers faster than my 400lb, 600cc GSX-R. I can turn the bars to the stop and the Norge responds instantly by slamming over onto it's side (and centerstand). If I do this on the GSX-R, the front wheel will slide for a moment while the bike falls over much more slowly. Don't try this at home kids. Ducati's V-twin won't have the same advantage as the Norge (sideways motor), but it will have less rotational inertia to overcome than an inline-four. The V-twin is also narrow and the lack of frame on either side of it makes the whole bike that much narrower. That means a lot of room to move around in the seat, put your knees different places and alter the way the bike handles just by shifting your weight.

There is a lot more to learn about the 1199, but this is what we have to go on at the moment. Looking at these photos, I would guess that they're serious about saving weight and making power. I know that seems like an obvious statement, but this is a big change for them. They're almost certainly not going to be making more power with a V-twin than the S1000RR or ZX10R, so they'll have to find another way to compete. One area that no company has put a real effort into is weight and size. If ever there was a reason to sacrifice your companies traditional steel trellis frame for a radically new minimalist aluminum one, weight savings would be it. If I'm right, the 1199 could end up feeling like more like a 450mx bike than a big, heavy liter-bike and that's a good thing.