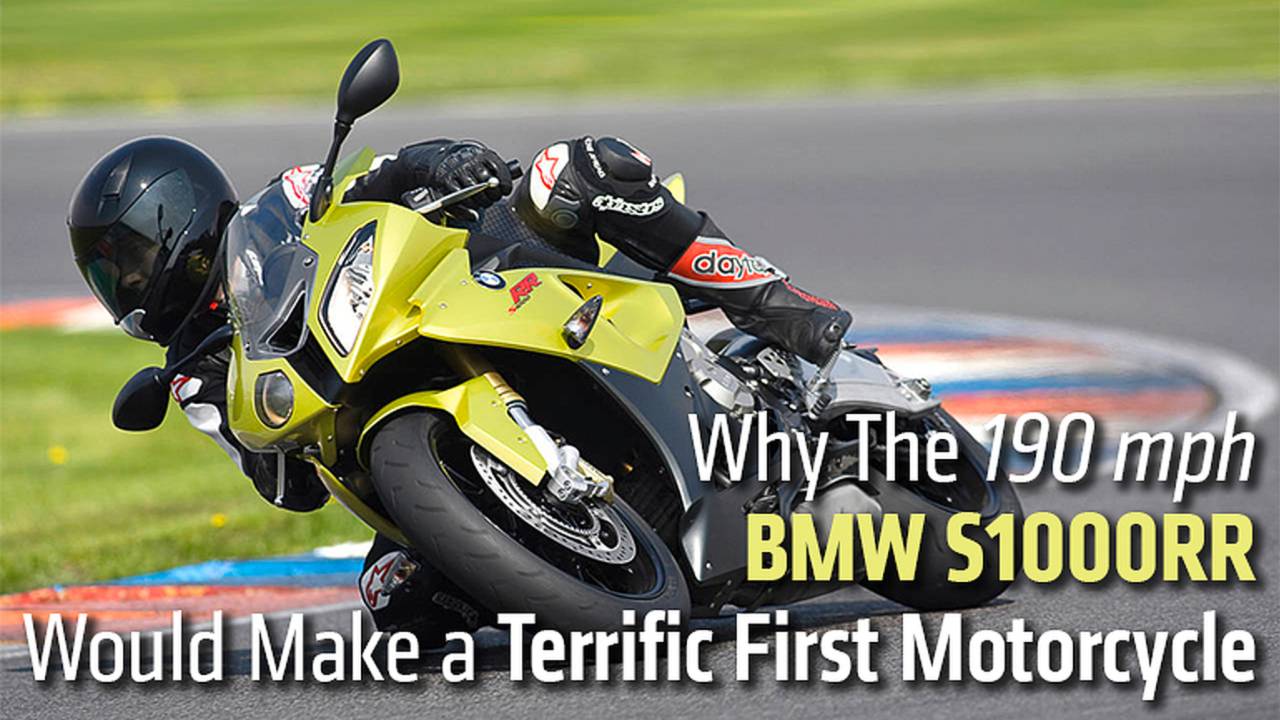 Why ride a 25-year old bike when you could have the fastest motorcycle ever? Here’s why the BMW S1000RR would be a great choice for your first motorcycle.

Ok, conventional wisdom states that all new riders should only ride a Ninja 250. But why ride a 25-year old beginner bike when you could instead have what, until this year, was the fastest motorcycle ever? Yeah, that sounds like a much better idea. Here’s why the BMW S1000RR would be a great choice for your first motorcycle.

Until the 2011 Kawasaki ZX-10R came along (has it actually reached dealers yet, post recall?) the S1000RR was the absolute king of the liter bike hill, claiming 193bhp and 204kg (wet) to give it the highest power-to-weight ratio of any production superbike to-date. Last year’s date.

You can see that performance on the street too. Riding the S1000RR back-to-back with the Aprilia RSV4 — which just bested it in SBK two seasons running — it was the BMW that was pulling away with ease stoplight-to-stoplight and out on mountain roads too. The Aprilia rider had to work significantly harder for noticeably less speed. Over the length of Glendora Mountain Road the difference was measured in minutes, between two riders of largely similar capabilities.

But why’s this matter if you’re considering an S1000RR as your first bike? I mean, there’s no way you’ll be capable of using even 25 percent of its performance, right? Two words: bragging rights. No matter how stretched the swingarm on your buddy’s Hayabusa nor how bright the airbrushed flames on that other guy’s R1, it’s your bike that you can tell the girls at Burger King is the fastest parked outside.

But it’s exceptionally easy to ride.

That’s not just due to the electronics either. Like an old Honda Fireblade, you’ll feel right at home the second you hop on the S1000RR and everything works exactly the way you expect it to. Nothing’s weird, nothing’s surprising, nothing’s unique. The brakes are extremely powerful, yet gradual in their application. The suspension is extremely capable, yet compliant over bad roads. The steering is very fast, yet the chassis is completely stable. The engine is extremely powerful, yet utterly smooth, linear and predictable. Just get on it and ride fast, you’ll hardly realize you’re on a motorcycle at all.

$13,950 ($15,880 with ABS and DTC) is less than half the price of that 350Z you crashed last summer. I just got an insurance quote on one (third party only) for $217 a year! I’m 30, single and have been riding for a while though, yours might be a bit higher if you’re a n00b and don’t have grey hair yet. What’s that bike payment average out as? A couple hundo a month to own one of the fastest production vehicles ever made. Sure beats a new set of rims for your Civic.

It’s got a luxury badge.

Honda? Jap crap. Ducati? Come on, you’re not a dentist. Aprilia? Who? Everyone, from your old school buddies to your mom/landlord to that girl that won’t sleep with you, knows what a BMW badge means. It means she’ll come home with you now. Right?

It compensates for your riding inadequacies.

Know the one thing that makes the S1000RR unique, at least as long as every other performance bike doesn’t have crazy electronic rider aids? You control acceleration with lean angle, not throttle. Leaned over in a corner, just whack the throttle wide open whenever you feel like it. The traction control will meter out acceleration at a rate the available grip can handle and the wheelie control will keep the front end down. Keep it pointed around the corner and you’ll simply accelerate at the maximum possible rate. That’s the kind of performance only hitherto available to talented superbike racers, but now new riders can have it too.

That’s not the only trick up the S1000RR’s electronic sleeve. Blow into a corner too hot and there’s no need to worry. Just grab some front brake and the ABS will keep the front wheel from tucking as you lean towards the apex.

If ever a motorcycle was idiot proof, it’s this one. That’s a good thing, as a new rider on a 193bhp liter bike, you’re going to need all the help you can get. Our advice: keep it pointed away from trees. If you can manage that, you should be ok.

Its manners are mild.

Won’t you be scared by all that power the second you open the throttle pulling away from the dealer’s smiling face? No you will not. Hopefully he’ll have helpfully switched it into Rain mode for you, limiting power to 150bhp and slowing down throttle response. Open the throttle and acceleration occurs as if by magic at a rate even you can control. See previous advice about pointing away from trees.

But even in Sport or Race mode (ok, Slick, as in “slick tires” is a bit snappy on the throttle response), where full power becomes available, the experience belies the performance. It’s an inline-four so you know it’s going to be smooth but nothing other than the speedometer adequately conveys what exactly is happening between your legs. And even the flickering numbers on that digital speedometer — illegibly blurred by transition at full throttle — fail to truly convey the sheer violence of the raw performance. Riding the S1000RR is like sleeping through an earthquake.

Ok, since you’ve never ridden a motorcycle before, here’s something you weren’t expecting: motorcycles are abysmally uncomfortable. Especially fast ones. Your hands will go numb, your ass will go numb, your legs will go gangrenous and fall off. But not on the BMW. You probably still don’t want to cross the country on it if you’ve got a back problem, but the seat is soft, the bars are reasonably high and not too far from the seat, the pegs are surprisingly low. There’s no vibrations of any kind, whatsoever.

We’ve frequently argued that sportsbikes make the best road bikes largely because they’re so capable that anything you can do to them on the street fails to faze them. The only fly in the ointment has traditionally been that you can’t ride them on the road because your legs will inconveniently detach from your body. On the S1000RR, not only will you be able to keep your legs, but you’ll be able to use them to walk when you arrive at your destination too.

Everyone knows what it is.

That guy at the lights in the Porsche? He knows he can’t beat you. Your buddy with the CBR? He understands the consequences of you showing up on this RR. Your non-riding buddies? They’ll be hella impressed when they see you're riding this BMW.