Did The Feds Fake Evidence To Close A Dirt Bike Paradise? 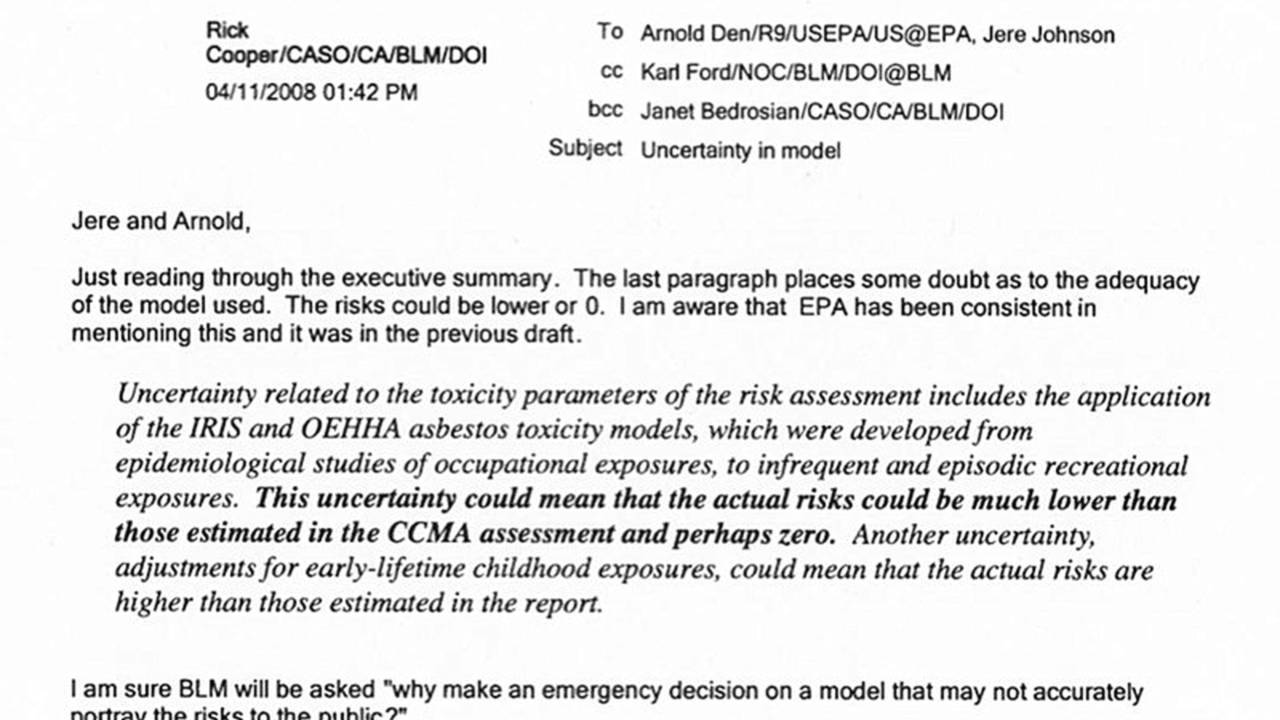 In 2008 the Clear Creek Management Area — a popular dirt bike and Off-Highway Vehicle destination near Hollister, California — was closed after an Environmental Protection Agency investigation found “unsafe” levels of a naturally occurring, asbestos-containing mineral there. I’ve been riding there since 1968 and thought something was fishy with the Bureau of Land Management’s motivations and the EPA testing. The type of asbestos naturally occurring at Clear Creek is a mineral variety shown, unlike commercial varieties, to have no ill effects on human health and it appeared that the BLM influenced the EPA test results. So, I filed several Freedom of Information Act request and began investigating. Here’s what I found.

The 70,000 acre Clear Creek Management Area is located in Southern San Benito and Fresno Counties. Since the early 1900s the Clear Creek area was mined for the mineral chrysotile which was the main ingredient used to make the product white asbestos until the EPA closed the mines and turned them into superfund sites. The interesting part is there are no documented health issues related to the mineral chrysotile or what the Environmental Protection Agency calls “naturally occurring asbestos” at Clear Creek even after all those years of mining. The documented health issues are all related to manufactured asbestos, the kind used in brake linings and fire retardants. The mineral itself is benign.

Why would the BLM want to close a recreation area?

In the memos I have read, it has been noted that, for many years, the BLM has been under pressure from the EPA to do something about Clear Creek to avoid being sued by several green advocacy groups. It’s my belief that the agencies are concerned about the potential liability arising from these lawsuits, not the chrysotile presence. Chrysotile and its asbestos content merely gave them an excuse to avoid being sued for mismanagement.

Chrysotile is not the same thing as manufactured asbestos and is not dangerous to humans.

The word "asbestos" is a vernacular term given to six types of naturally occurring fibrous amphibole and serpentine minerals. Asbestos paranoia began in the 1970s after Dr. Irving Selikoff, of Mt. Sinai School of Medicine, found that some workers, occupationally exposed to certain amphibole (non-serpentine) type asbestos fibers, were at increased risk of lung disease. While Dr. Selikoff's work played a key role in removing amphibole asbestos from industry, the nescient media, driven by the need for hysteria headlines, created public panic and a billion dollar industry associated with "evil" asbestos. The issue is further exasperated by the Environmental Protection Agency's (EPA) unwillingness to accurately represent the facts. Generally, the media and the EPA fail to differentiate between amphibole and chrysotile (serpentine) fibers used for asbestos.

Without exception, every human study in the United States showing asbestos etiology is associated with amphibole fiber asbestos, and there is not a single study showing chrysotile etiology. In fact, every study of chrysotile fiber has shown it to be harmless, even in cases of excessive exposure. The EPA, purposefully ignoring the scientific evidence, has created a dangerous policy based solely on pseudoscience.

This policy can probably be credited with more lost lives than asbestos poisoning itself. For example, many leading professionals blamed the rapid structural failure of the World Trade Center on the asbestos ban that stopped the use of (chrysotile) asbestos insulation above the 64th floor (James Glanz and Andrew C. Revkin. "A Nation Challenged; Haunting Question: Did the Ban on Asbestos Lead to Loss of Life?" New York Times. September 18, 2001). Even the loss of the Columbia Space Shuttle can be traced back to the removal of chrysotile asbestos fiber from the failed o-ring that caused the disaster ("Did risk reduction backfire in space?" The Washington Times. January 28, 1996).

Millions of acres of the California Coast Ranges and western slope of the Sierra Nevada are underlain by chrysotile asbestos-bearing rock and soil which have been there for millions of years. Most of the San Francisco Bay area is underlain by these same rock formations. Were it as dangerous as some government agencies such as the EPA imply, thousands of Californians would be dead and dying from it.

This photo was taken by the EPA to demonstrate their “as close to real life” test procedures. At the time of the test in September, 2005, Clear Creek was closed to the public for for the dry season. Also notable is the clear bulldozer track in the bottom left. No maintenance was recorded on this road in the run up to the testing and it doesn’t appear to be in the same condition it is normally. This road has had tons of gravel placed and compacted on it over the years to keep vehicle traffic safe and to control erosion. Normal conditions are not this dusty.

This video was also taken by the EPA to document a realistic “moist” conditions test. Note that while there is fog in the air, the road appears to be completely dry. Also note that the SUV appears to be exceeding the 20mph speed limit and is being operated, in my professional opinion as a police officer, in an unsafe manner not typical for Clear Creek users. The results of this test were actually dropped in favor of those recorded on the previous day, which had even less humidity.

This photo shows the EPA testing the dust campers would be exposed to by passing vehicles. Note that the tent isn’t located in a campsite, but is instead immediately adjacent to the road in a location that would be atypical.

Throughout email exchanges I obtained through the FOIA, the BLM appears to pressure the EPA to word its results in a manner intended to play up the health risks.

On 04-11-2008 at 1105 hours, After receiving the final draft EPA Executive summary report regarding the asbestos test/study of Clear Creek, Timothy Moore (BLM) sent Rick Cooper (BLM) an email regarding the EPA's report. Also included with the executive summary is a three-fold information sheet titled "Asbestos in the Environment at the Clear Creek Management Area."

Mr. Moore writes: “Rick, On the FAQ's- we need to change the information packet we sell that contains, ‘Asbestos in the Environment at the Clear Creek Management Area.’ some of this information in this three page handout conflicts with the new EPA data, such as pg 2 ‘low levels of asbestos are not likely to be harmful to your health.’”

On 04-11-2008 at 0142 PM Rick Cooper (BLM) sent Jere Johnson and Arnold Den of the EPA an email regarding the Executive Summary. Subject: uncertainty in model.

Just reading through the executive summary. The last paragraph places some doubt as to the adequacy of the model used. The risk could be lower or zero. I am aware that the EPA has been consistent in mentioning this and it was in the previous draft.

I am sure the BLM will be asked ‘why make an emergency decision on a model that may not accurately portray the risks to the public?’”

Before these emails were sent, the BLM and EPA were already acting as if closing Clear Creek was a foregone conclusion.

First bulleted paragraph: "Making a decision the minute the final report comes out gives the appearance that BLM did not even take time to consider the report. The intent of the RMP was to analyze land use on the project area utilizing the assessment data. It is in BLM's interest to have an open public process (even a short one) prior to making a decision for closure and may aid in our defense of any appeals."

Second bulleted paragraph: "BLM will need to close all county roads in CCMA to effectively close and control access to the Hazardous Asbestos Area. Not fully disclosing BLM's intent (closure) with key audiences identified in the Pre Comm. Plan and then 2 weeks later closing the CCMA could be detrimental for our long-term relations and credibility with our stakeholders."

Through these FOIA documents, we learn that the EPA’s “as close to real life” testing was anything but. It was conducted during a season in which Clear Creek is closed, a season in which conditions for the chrysotile-carrying dust are at their most favorable. We can also see that the test sites were modified prior to the testing taking place and at a time when members of the public were not allowed access to Clear Creek. Those modifications made test conditions more favorable for the foregone conclusion that Clear Creek should be closed due to the alleged health risks posed by the mineral Chrysotile or as the EPA says, “naturally occurring asbestos.”

Despite favorable and unrealistic test conditions and methodology (high speeds, campsites located immediately adjacent to roads) the EPA still concluded that “the actual risk could be much lower than estimated...and perhaps zero.” A conclusion which the BLM took steps to strike from the official reports.

We can also see that the BLM and EPA were in communication before the results of the testing were known and that those communications appear to indicate that closing Clear Creek was a foregone conclusion while the testing was taking place.

All this together leads me to conclude that the EPA conducted its testing for the sole purpose of creating a justification for Clear Creek’s closure. But, despite designing its tests specifically to result in the highest possible, unrealistic levels of chrysotile exposure, it still couldn’t provide definitive evidence of a health risk. Regardless of that lack of evidence, the BLM moved forward with closing Clear Creek immediately upon publication of the test results. Results which it modified. That the test sites were clearly modified prior to the testing makes this all the more damning.

And of course, all that testing was ridiculous anyway. The type of asbestos contained in the Chrysotile mineral is harmless to human beings in the first place.

It’s my opinion that, lacking evidence of an actual health risk, Clear Creek should be re-opened to the public immediately and I intend to pursue this cause with elected officials and through the legal system.

Ken Deeg is a law enforcement officer for the City of Santa Cruz, California. He pursued this investigation on his personal time. Additional reporting on chrysotile was contributed by Ray Iddings and Justin Hensley.

This article represents the opinion of the author and does not necessarily represent the position of HellForLeatherMagazine.com or any of its parent companies, subsidiaries, or affiliated organizations.