I’ve only had the chance to wear this new AGV AX-8 Dual helmet for a quick ride to Sean’s house and back, but I’m so excited about it that I wanted to go ahead and share. Even after just a quick blast up and down the 405, I can tell this is going to be my new favorite helmet. Think of it as the adventure touring version of Rossi’s AGV GP-Tech, just with much better vision, much better vent...

I’ve only had the chance to wear this new AGV AX-8 Dual helmet for a quick ride to Sean’s house and back, but I’m so excited about it that I wanted to go ahead and share. Even after just a quick blast up and down the 405, I can tell this is going to be my new favorite helmet. Think of it as the adventure touring version of Rossi’s AGV GP-Tech, just with much better vision, much better ventilation and, unexpectedly, it’s appreciably lighter too.

Both Grant and I already love our GP-Techs. Like the AX-8, they’re made to the light and safe ECE 22.05 helmet safety standard rather than America’s hard, heavy and corrupt Snell M2010. Putting them on is like wearing a pillow, they’re exceptionally stable at high speeds, ventilate well and, surprisingly, are very quiet.

That last thing, the quietness, is not something you can say about the AX-8. Maybe it’s all the ventilation or that extended chin bar, but this is a very noisy helmet at speed. I tried it with the peak in place and with it off. It’s possibly a little quieter with it off, but there’s not a huge difference. Other niggles include some susceptibility to cross winds and buffeting as you approach 100mph with the peak in place. So far I’ve only tried the AX-8 on an FJR 1300, so it may fare better on other bikes. It’s most noticeable when turning your head to do a lifesaver, when the wind blast catches the helmet’s side.

Other than that, the AX-8 is simply incredible. We have two issues with our GP-Techs: a visor mechanism that makes swapping them a little bit of a pain, frequently requiring tools and somewhat restricted upwards vision, particularly while hanging off aggressive sportsbikes. Neither complaint applies to the AX-8, it’s visor hinges on metal screws rather than some elaborate, flimsy plastic mechanism and the viewport is literally the largest I’ve ever looked through, both sideways and up and down. It’s actually a little spooky not to see the edges of the aperture hovering in your peripheral vision, it’s almost as if you’re not wearing a helmet.

Peripheral vision is a bit of a funny thing. Humans can only use about 90° of vision to either side and the minimum helmet standard is 105°. Twisting your eyeballs sideways in the AX-8 only reveals the edge of the aperture’s bottom angle, not any portion of its sides. This may not increase vision over a standard helmet, but it does lead to an incredible sense of openness.

Actually, I lied, I do have one other issue with the AX-8: tinted visors (shields if you didn’t grow up in England) aren’t yet available. With the peak removed, you need one too as there’s nothing there protect against the sun at all. With most helmets, even ones without peaks, you can twist your head down to block it’s glare, but the AX-8’s aperture is so huge that there’s simply no hiding. Guess that peak is staying on until black visors do become available, which should be very soon.

But the most distinctive thing about the AX-8 isn’t its futuristic looks, ability to convert from peaked full-face to no-peak full-face to peak-and-goggles dirt helmet, it’s the weight. At 1,400g for a size medium, it’s noticeably lighter than the GP-Tech, which was already the lightest helmet I’d ever owned. It’s a full half pound lighter than the Snell-certified Arai XD3, which is of a similar adventure touring design. I’m betting that large aperture helps drop a few grams, as does the Kevlar/carbon/fiberglass shell.

The AX-8 also has one more vent than the GP-Tech, a center-mounted one on top. The cover of the sliding chin vent also pops off if you’re really going to hit the trails. With everything open on the way to Sean’s, I was actually a little bit chilly on the highway, even in relatively balmy 68-degree weather. I’d say that’s proof all this ventilation works. Everything closes though. It’s actually incredible that this lighter, more ventilated, equally spec’d helmet comes in $100 cheaper than the GP-Tech at $400. 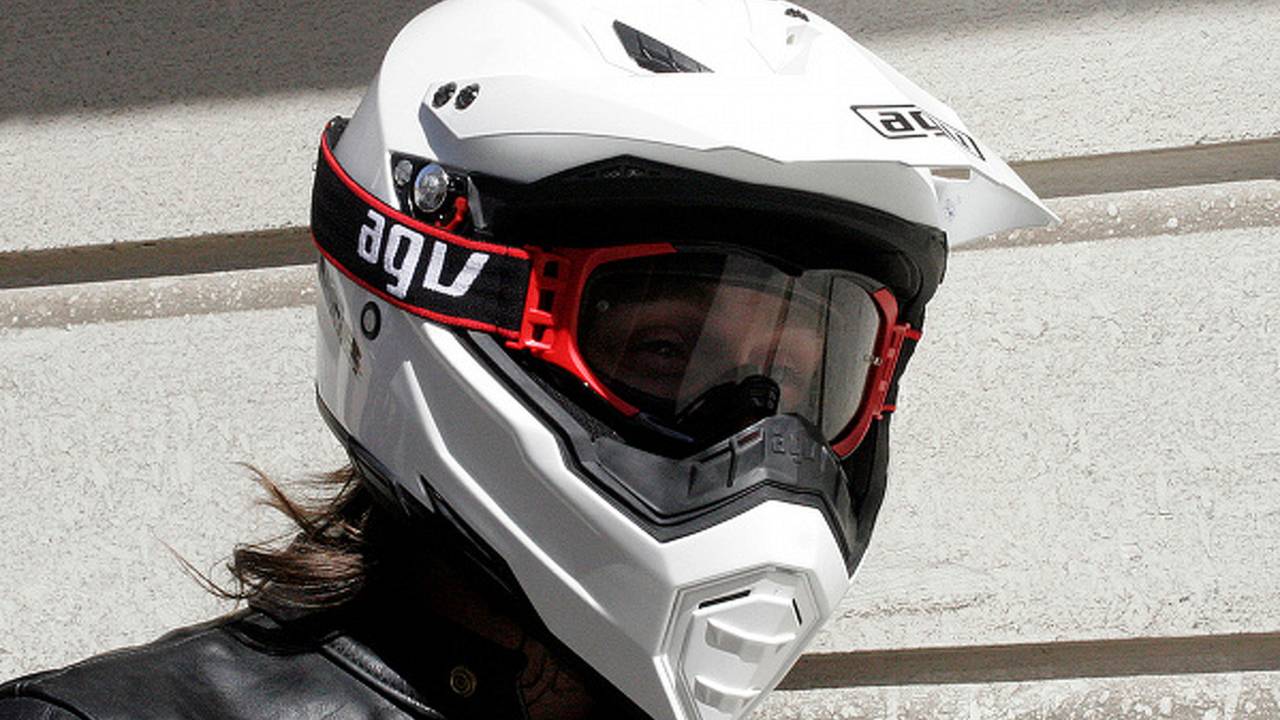 As you can see in these goofy photos, the AX-8 has three different configurations: peak and visor, no peak and visor, peak and goggles. The chin piece doesn’t extend out quite as far as a traditional dirt helmet, but the goggles still fit comfortably and easily. Even standing still and breathing heavily to try and force it to, the visor refused to fog one iota. It seals tightly on its rubber gaskets.

That big aperture does have one downside. The visor has to be so large that flipped up, its two fangs do encroach on your vision a little bit. I’m thinking that’s more quirk than flaw and is something I’ll get used to.

These looks, the versatility, the vision and the ventilation, I think I’m in love with this helmet already and I’ve maybe put 50 miles on it. With that black visor, this could become the nicest helmet ever made, which is saying a lot for this brand and this price point. I’ll report back after a few more miles on a few different bikes. Of particular interest should be aerodynamics at high speeds on the track and general whether or not it can really work on a dirt bike. Initial impressions are summed up by one word though: wow.

Don't forget that HFL subscribers qualify for personal discounts at Urban Rider, which currently has the AX-8 Dual in stock.