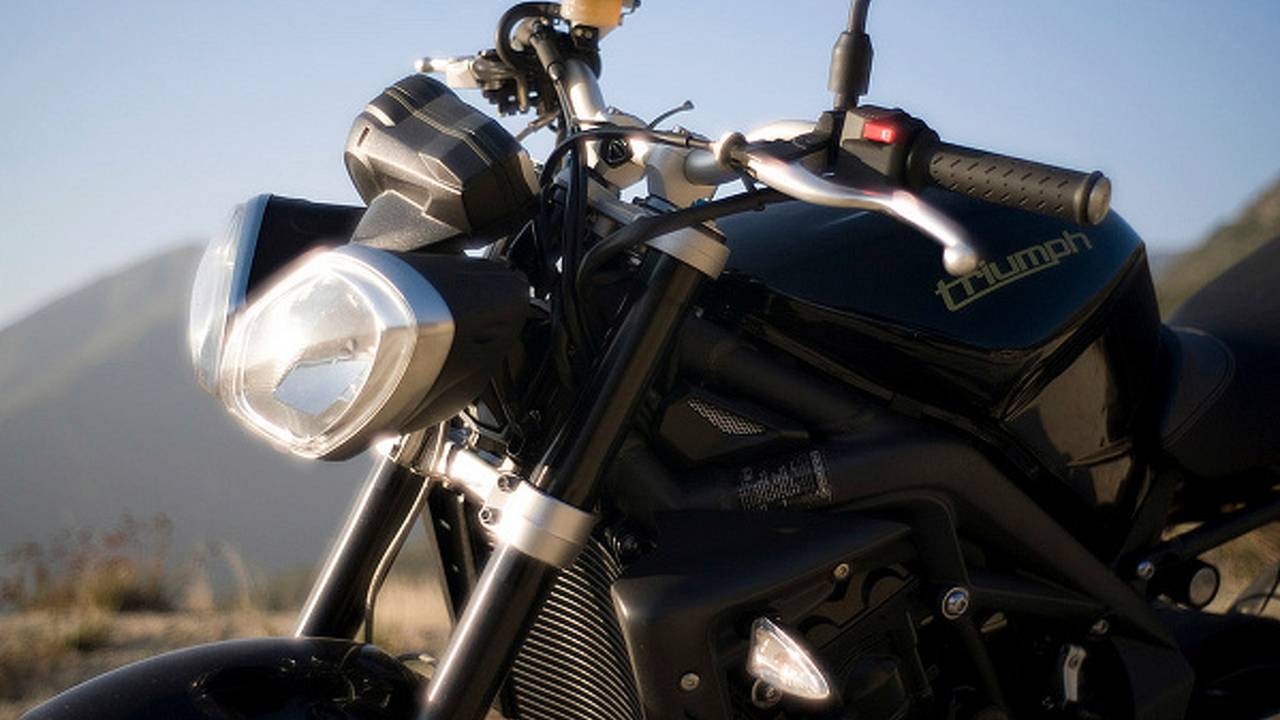 The good, the bad, and the sexy.

Out here in LA, we’ve got a lot of bikes coming through our respective garages. Fancy stuff too. Grant’s riding a Diavel this week, Sean’s on an Aprilia and I just got my hands back on the Daytona 675R. But even with that kind of dream garage, there’s very few motorcycles that we wish would stick around permanently. It’s always surprising which bikes those are too. The 2012 Triumph Street Triple R doesn’t make nearly 200bhp, doesn’t have traction control and doesn’t even wear Ohlins badges on its suspension. But, even without all that, it’s still the closest thing to a perfect motorcycle we’ve ridden.

Tires: One of the things you have to get used to about riding press bikes is riding on OEM tires. The D204s that came stock on the ’11 R1, for instance, were garbage. So much so that they essentially made the bike unrideable. But not on the Street Triple R; it comes from the showroom wearing Pirelli Diablo Rosso Corsas, which heat up quickly and work decently in the wet, but are still capable of huge lean angles and big throttle openings in the canyons. They’re what we’d put on a bike like this Triumph anyways, so the fact that they’re there as stock is a $300 bonus.

Fueling: Triumph doesn’t communicate this, but the ’12 Street Triple now comes with switchable riding modes. There’s just no button for switching them. Instead, fueling is smooth and predictable when you’re gentle with the throttle, automagically switching to immediate, sharp and precise when you get aggressive. To us, that makes a lot more sense than a silly switch; it does what you need it to do when you need it to do it, without you having to get involved. Regardless of what you ask though, the fueling is absolutely perfect; no hiccups, no stutters, no hesitation.

Power: Power is down from 124bhp on the Daytona to 104 on the Street. That’s not as bad as it sounds. You’ll miss a little at the absolute top of the rev range, but the low and mid ranges are surprisingly full for a triple displacing only 675cc. Open the throttle and you won’t be left wanting.

Flexibility: See above. It’s surprisingly useful for a relatively small motor. Yes, we know it’s ridiculous to call a 675 “relatively small,” but it’s 2011, not 1974 and this is the world we live in. The only thing you miss coming off the larger, 1,050cc Speed Triple is the bigger bike’s explosive punch at mild throttle openings. You won’t be left behind on the Street.

Satin finishes: In addition to the new headlights, Triumph also ditched chrome finishes on the exhaust and heel guards for 2012, replacing them with satin finishes. Chrome is tacky, thank you.

Steering: In order to ride a motorcycle with any degree of confidence, you need an intimate connection with the front tire. It should communicate every last intricacy of what it's doing, from absorbing tiny bumps to just how much grip you have left. You also want your inputs to be translated intuitively and proportionately. Thanks to high-quality damping and a steeper rake than the stock Street Triple, the R does all the above.

Wheelies: Full throttle in 2nd over a crest and your front wheel’s going to come up. Grab 3rd and it’s going to come down. If the wheel’s not straight, it’s going to get a little wiggle on when it does. All that is smooth, fun and controllable on the Street Triple and not in the least bit scary.

Brakes: Again, riding press bikes does have drawbacks. Stock brakes among them. But on the Street Triple R, you don’t have bullshit rubber lines, you have nice braided steel items and the radial Nissin calipers off the Daytona. Good feel and incredibly strong.

Seat: This is probably the biggest advantage the Street Triple has over the Daytona. In place of a little foam pad, you instead get a big, comfy saddle. It’s still easy to move around and achieve proper BP, your butt just doesn’t go into convulsions after 20 miles.

Headlights: The most controversial thing about the ’12 bike is the newly angular headlights. To us, these are a much better fit, evoking technology and performance in place of some 1960s oily two-wheeled ideal. We just wish they included projector beams so we could easily fit HIDs.

Colors/Graphics: I’ve got a soft spot for old JPS Lotuses, so this black and gold definitely rings my bell. I also dig the new Triumph logo font, for the same reason as I dig the headlights — this isn’t a retro, it’s a modern performance bike and it looks like it, just in a classy, understated way. The little red R is a classy, just-flashy-enough touch.

Mirrors: You can see stuff in them! That stuff isn’t your elbows!

Price: At just $9,599, the Street Triple R makes every other performance naked look silly. How can BMW justify $11k+ for the crappy F800R when the Street will run circles around it? Why is a Ducati Streetfighter 848 three grand more? At that price point, monthly payments are going to be what, $150-ish? I paid $170 on my iPhone bill last month (travel adds up). Awesome motorcycle or sexts from girls? Wait, that’s a harder choice than I first thought...

Riding Position: The bars are slightly too high. This leads to a little bit of instability above 80mph, worsening as you get north of 120. You also get buffeted fairly badly on the highway. But, riding position is personal. A lot of you are going to appreciate how upright it is if you do most of your riding in town. I do too, but I live in LA where I go at least 100mph on a daily basis. Dropping the bars an inch or fitting clip-ons on risers would cure this and, talking to owners, both of those are popular modifications.

See? A low-mount Arrow does wonders for making the tail look svelte.

Stock exhausts: Like all stock motorcycles, the Triumph’s cans are a little too visually bulky. A low-mount Arrow looks way nicer. Stock ones still sound nice though.

Two-tone seat: The pillion portion of the one-piece seat is ugly grey vinyl. It looks like something that should be on a bass boat.

Clocks: Triumph's universal clocks feature poor graphic design, are hard to read and don't really display much info. If you're going to use one set of instruments on every single bike you make, at least make them look nice.

And that’s it. There’s literally only four minor things wrong with the Street Triple R, other than the fact that I’m not currently riding it. An awesome brand, good looks, good comfort, good performance and a really, really fun ride for less than $10k? This thing is pure win.