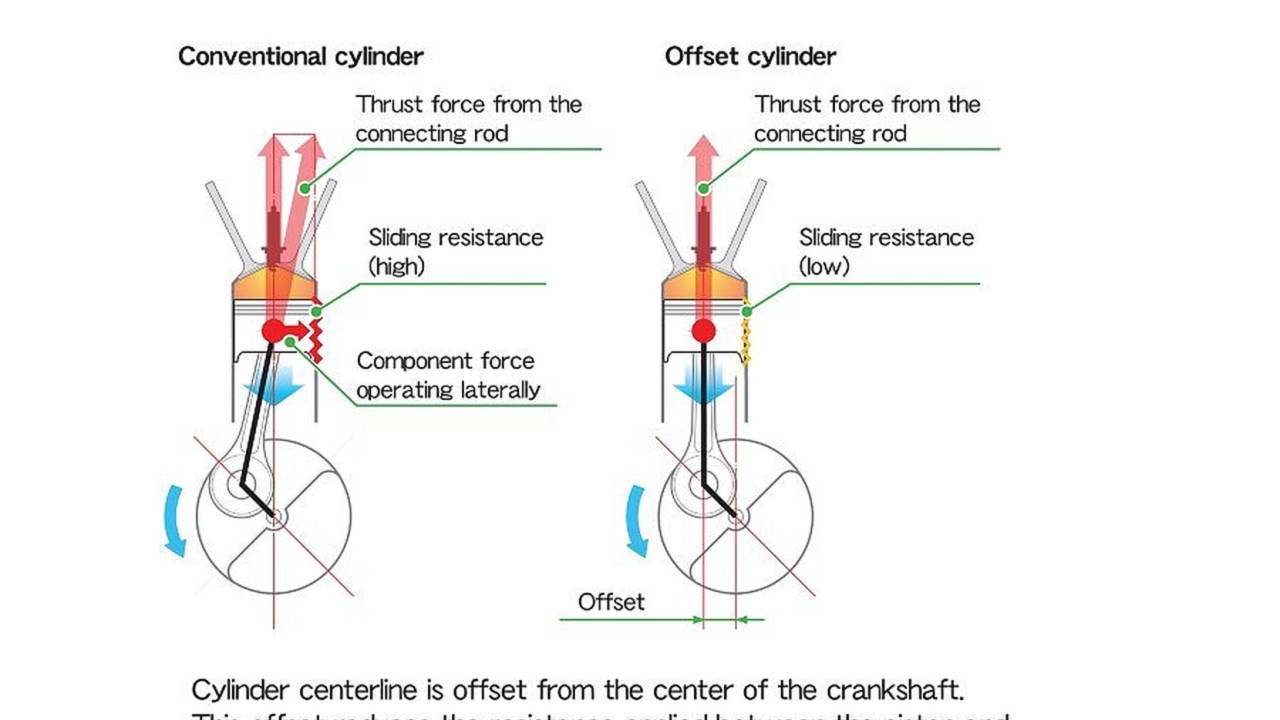 We’ve been reading a lot about offset, or désaxé, cylinders this year, they seem to be the flavor-of-the-month for motorcycle engine technology, helping to explain the unprecedentedly high outputs from bikes like the 2011 Kawasaki ZX-10R. But, we’ve been unable to translate the relatively simple concept into anything less than very complicated words. This drawing does that for us. As you can...

We’ve been reading a lot about offset, or désaxé, cylinders this year, they seem to be the flavor-of-the-month for motorcycle engine technology, helping to explain the unprecedentedly high outputs from bikes like the 2011 Kawasaki ZX-10R. But, we’ve been unable to translate the relatively simple concept into anything less than very complicated words. This drawing does that for us. As you can see, the design locates the piston to the side of the crank centerline, creating a straighter path for the connecting rod during the power stroke and reducing its sideways force on the piston as it slides up and down in the cylinder. This means less frictional losses and an easier life for the pistons and rods, which can be made lighter, thereby reducing reciprocating mass. That helps the Ninja make a record 197bhp, but bikes like the Honda CBR250R and even the Horex VR6 benefit too.

This drawing actually comes from Honda, included as part of the tech material on the CBR250R (more on that soon), but we wanted to highlight offset cylinder technology on its own as it looks like more and more motorcycle engines will be using the technology.

Actually, “technology” is something of a misnomer. Offset cylinders have been around as long as internal combustion engines. It doesn’t take radical new materials or know-how to take advantage of offset cylinders, just engineering them into a new engine.

The concept is simplicity itself. In a normally-configured engine, the conrod sits at an angle, pushing the piston against the cylinder wall. Increased friction saps power and requires stronger components, increasing reciprocating mass, which also wastes energy during the power stroke, also reducing power. Reposition the cylinder (the CBR and Ninja move it forwards a couple millimeters) and that conrod now travels straight up and down during the power stroke. Voila, less force pushing the piston sideways and therefore less friction. As a result, the length of the piston skirts can be reduced and the size of the rods, pistons and bearings can also be decreased.

Discussing the benefits, Honda says, “Another slick bit of design work further reduces engine friction: The cylinder centerline is offset from the center of the crankshaft 4mm toward the exhaust side. Doing so reduces the lateral resistance generated between the piston and the cylinder during the power stroke. Granted, it’s a small increment, but it’s an ingenious design element exemplifying attention to detail that yields free benefits.”

The Horex VR6 not for frictional benefits, but for packaging purposes. By staggering the offset front to rear, the VR6 engine configuration allows six parallel cylinders to fit into a package more or less the size of an inline-four. Check out this illustration; the first cylinder is offset in one direction, the next in the other, allowing the cylinders to be placed very close together and in parallel instead of the more conventional V arrangement. Horex actually goes one step further to reduce friction, adding a slight V back in to allow for an even straighter load path during the power stroke.

Kawasaki references offset cylinders in the new ZX-10R’s press material, saying, “Offset cylinder bores (relative to the crankshaft) are positioned 2mm toward the exhaust side of the engine, resulting in reduced lateral piston force at the point of maximum combustion pressure, reduced mechanical friction and lower piston loads – allowing the use of lighter pistons.”

So why don’t all engines offset their cylinders, reaping frictional and reciprocating mass benefits? According to Kevin Ash, the arrangement does have its disadvantages. Kev writes, “The power stroke takes longer, which is good for a high revving engine as it allows more time for efficient combustion, but it also makes controlling vibration more difficult as the secondary out-of-balance forces become more complex and asymmetric.”

A longer stroke is necessitated and the power stroke requires more time, which can lead to vibration problems. The v-twin in the Hesketh Vulcan used offset cylinders, which were partly to blame for that bike’s significant vibes.