A Factory Custom? The 2015 Victory Magnum 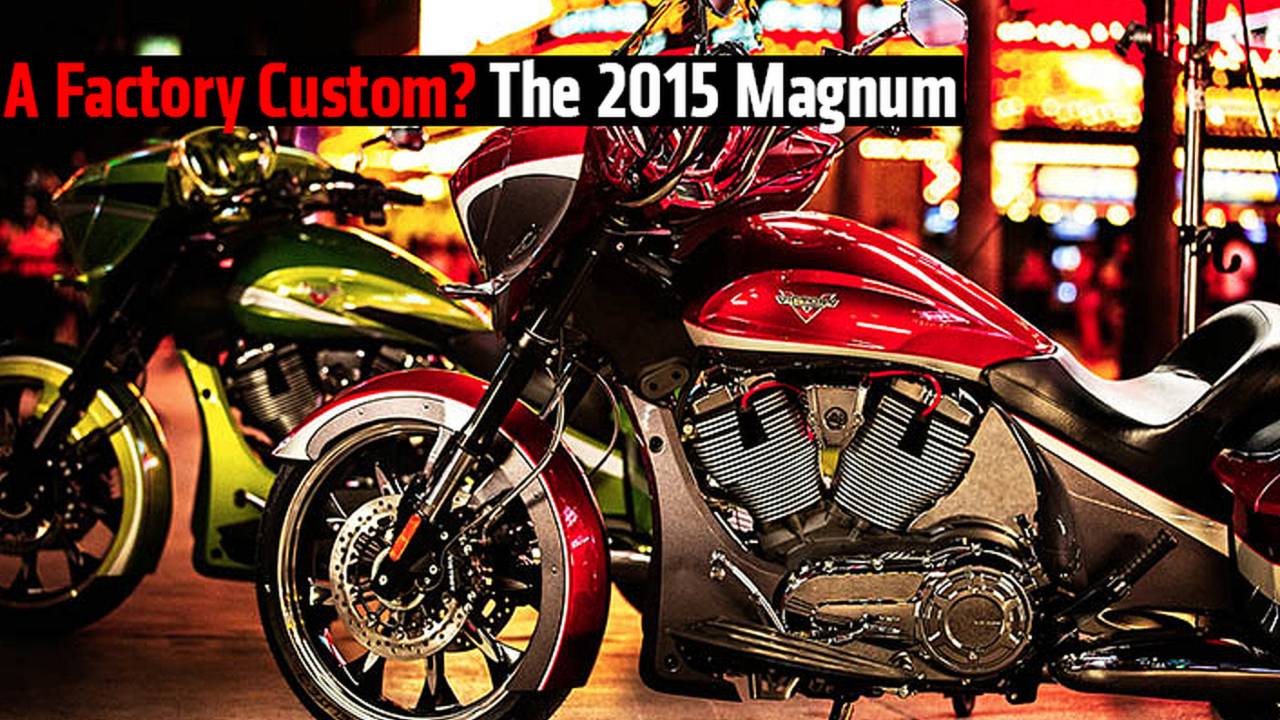 A Factory Custom? The 2015 Victory Magnum Let’s get this out of the way: the term “factory custom” is the worst bit of Marketing Speak in...

Let’s get this out of the way: the term “factory custom” is the worst bit of Marketing Speak in motorcycling. If hundreds of bikes that look exactly the same are rolling off of the assembly line, there’s really nothing “custom” about them. Victory’s marketing for its new Magnum bagger liberally uses the word “custom”—the new Victory's website says the Magnum features custom paint, custom wheels, custom style.

Doesn't the term, "custom" contradict "factory?" Can a mass-produced bike really be considered a custom machine? That’s a question for you to debate in the Comments section. Regardless of the answer, we can agree that the Victory Magnum is a striking new entry in the Victory lineup.

The Magnum designers at Victory were no doubt inspired by Arlen and Cory Ness, who’ve been affiliated with the brand since 2000. The new version of Victory’s popular and well-regarded Cross Country touring bike certainly looks like the work of a customizer. There are the bright, multicolor paint options, including a color scheme called “Plasma Lime” that is perhaps better suited for a soccer goalie’s jersey.

The Magnum also features three notable physical modifications to the Cross Country platform. The new bike sports a 21” front wheel (the standard Cross Country’s is 18”), a 26.3” seat height, which Victory says is the lowest in its class, and a slammed rear end (1” lower than that of the standard Cross Country). The combination of the three delivers more than just striking looks. Bagger fans will tell you that a bigger front wheel, combined with a dropped tail end, shifts a big bike’s weight to the rear and makes it easier to maneuver, especially at lower speeds.

The Magnum is powered by Victory’s mainstay 106 cu Freedom V-twin fuel-injected engine, and the transmission is the company’s standard 6-speed overdrive constant mesh. The tank holds 5.8 gallons, and the bike’s dry weight is 760 lbs, the same as the Cross Country’s.

As with the Cross Country, the Magnum can be outfitted with anti-lock brakes. Both the Cross Country and the Magnum come with proprietary sound systems. Victory upgraded the Magnum’s, giving it a new 100-watt system, and if that isn’t loud enough for you, you can buy additional saddlebag speakers. (If you do, you’ll probably want louder pipes. Both will tack on at least $1500 to the purchase price.)

Clearly the Magnum has a lot in common with its Cross Country sire. The biggest difference is that the Magnum is for riders looking for fun and flash as well as—or possibly over—functionality. It’s definitely an eye-catching bike, and even if it’s not a true “custom” bike, it’s one of the coolest new rides we’ve seen this year.