In The Flesh: Why You Need to See a Grand Prix 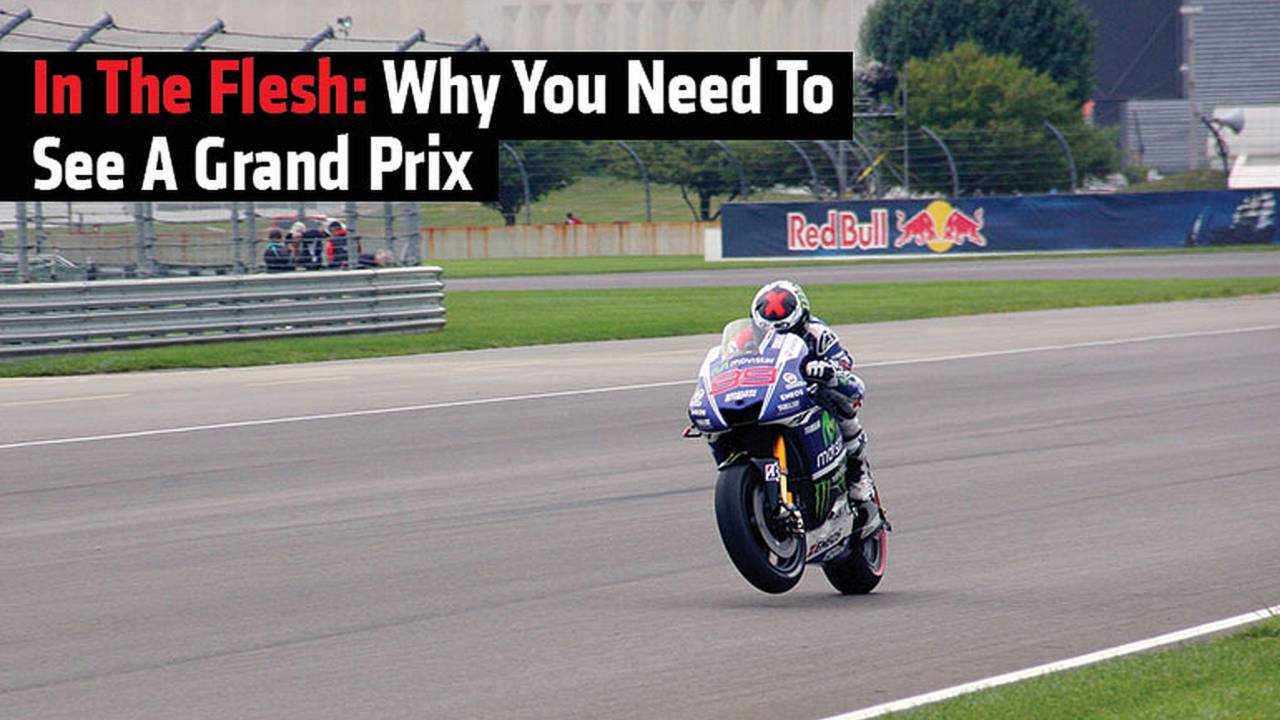 Witnessing a Gran Prix first hand chalks up to be one of those "things you have to do before you die". We breakdown the excitement and events around IndyGP.

On paper, motorcycle roadracing is not a great spectator sport for the fans in the stands. Even at the most well-designed tracks, only a few corners at a time are visible at any time.

The distance between spectator and rider-on-track necessitated by runoff areas in the corners means that the bikes appear tiny, the numbers hard to make out and teammates almost impossible to distinguish. Over the course of a weekend, you'll freeze in the mornings, swelter in the afternoons, become dehydrated instead of spending $6 on a bottle of water (I mean, a can of beer is only $2 more, so why not?), lose your hearing and walk what will feel like hundreds of miles.

But you've GOT to go to the races.

I don't mean that as a rite of passage. If you are like 90% of motorcyclists, which is to say completely obsessed with anything on two wheels, you simply have to go to a MotoGP weekend.

Any of them will do, really. Every Grand Prix has its own flavor, as unique and spectacular as the venues that host them and every one of them is a show worth experiencing.

Indianapolis is no exception. Yes, it's a "roval." Yes, it lacks the romance of Laguna Seca, the beauty of Mugello, and the polish of Austin's new Circuit of the Americas. Also, with races in the states, the crowd ins't as visually thick as what you'd see at the European rounds.

But Indy, well, the place is just massive and all that space means that you won't have to deal with the invasion of your personal space, at least until the main event on Sunday afternoon. (Ed Note: Pete likes a 3 foot buffer zone around him at all time.)

Not to overhype it, but you'll need that freedom of movement because there is almost more to see than you can possibly absorb over the course of one long weekend! MotoGP at Indy is a cornucopia of two-wheeled fun! It's a smorgasbord of all things motorcycling, from chrome to carbon fiber! A midwestern carnival of awesome!

There are vendor displays, stunt shows, gigantic manufacturer tents, lots of demo rides, driving and riding simulators, bike shows with everything from modern exotics to priceless vintage masterpieces. The main stage in the infield hosts concerts, charity auctions of priceless memorabilia for Riders for Health, and Q&A sessions just between riders and fans. The IMS Hall of Fame Museum can soak up an afternoon all by itself. Outside the track, there are must-see events like Motorcycles on the Meridian in downtown, and the world-famous Indy Mile flat track races at the fairgrounds.

Everywhere you look, there is more motorcycling madness to see, and I haven't even talked about the action on track, yet.

There is a lot of it, and that alone is worth the price of admission. The three Grand Prix classes are joined at Indy by the AMA's XR1200 series, putting four sharply different types of motorcycles on the track throughout the day. The races for each class are preceded by a number of practice and qualifying sessions, so that there are motorcycles circulating at speed nearly all day.

Over the course of the weekend, that gives you the opportunity to walk around the track, watching the different classes from various vantage points.

Going to a GP is an exercise in sensory overload. The sound of a full prototype Grand Prix motorcycle is unlike anything you've ever heard before. Imagine the sound of your street bike, after George Lucas has had his way with it, played through a speaker the size of your house, cranked to 11.

At Indianapolis, you're inside that speaker, courtesy of the acoustics of the grandstands. You don't hear these bikes so much as feel them. The polished rasp of the Honda, the full, throaty sound of the Yamaha, the unholy roar of the Ducati.

To hear them all pass at once, either growling through a corner or at full, 200 mile per hour song on the front straight, is to experience a symphony of so much raw power that it's almost terrifying. And before your ears even start ringing, your other senses will become equally dazzled. The flash of the colors of the bikes in the sun, the graceful arc of the riders through the corners, and the visible struggle by man and machine for mastery over the laws of physics will leave you unable to blink. The air is laced with the bouquet of hot rubber, searing carbon disc brakes, and the exquisite sweetness of exhaust made with race gas.

No matter what you ride, or if you follow racing or not, a Grand Prix weekend is an adventure you shouldn't miss. Monday morning, you'll find yourself back at work, sunburned, dehydrated, sore, and half deaf. And you'll regret none of those things, because you spent the weekend in a version of heaven that only the motorcycling faithful can truly appreciate.