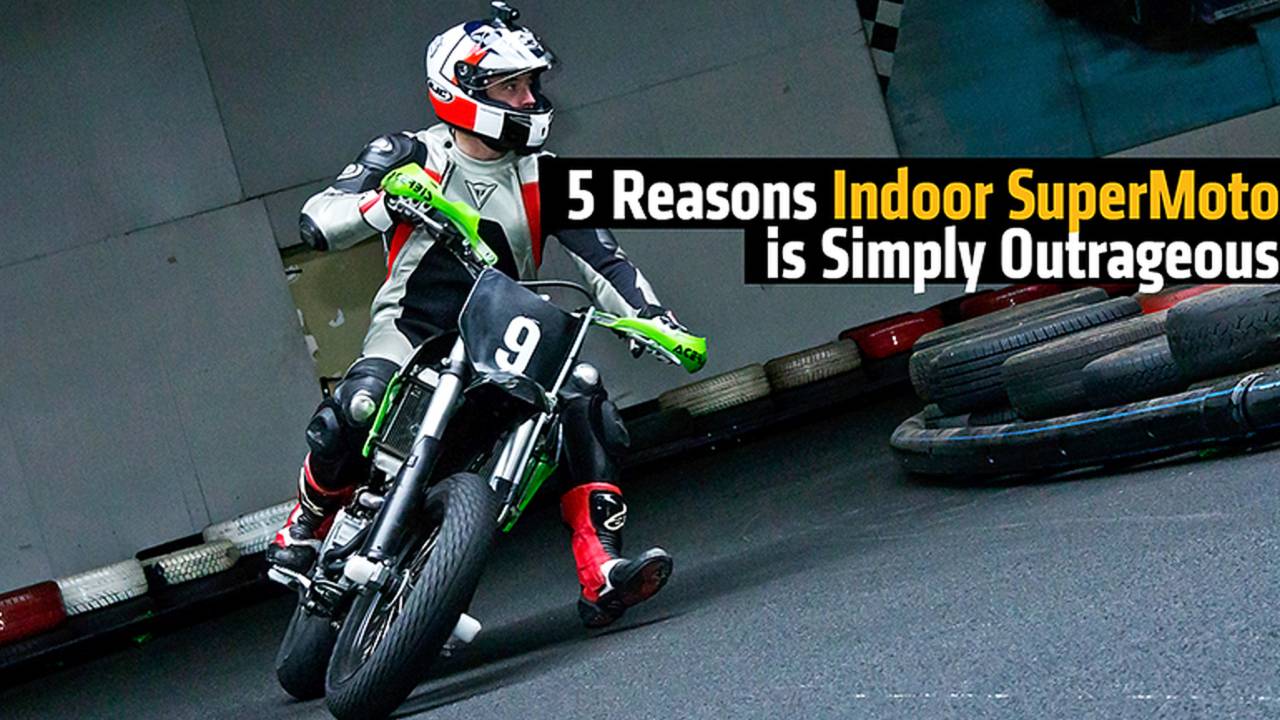 Here's why we think Indoor Supermoto racing is simply outrageous.

Racing a motorcycle on an indoor kart track is not normal. Doing it on a sub-freezing winter morning in Germany isn't either. It does somehow become easy to forget about the lack of heat and ominous risk of bodily harm once engines start up, however.

In case you don't know, SuperMoto is a type of racing/motorcycle with spritely, powerful bikes on ultra sticky, asphalt tires that defy the limits of grip and reality.

When I first heard about the indoor race scene here in Germany I initially had images of Ruben Xaus giving the thumbs up for a trackside lens at 80 degree lean sitting atop a Ducati Hypermotard… it actually wasn't that far off. I learned like many before me: wreck enough and you realize that when your knee is by your face, maybe your low is too low. Here are 5 reasons Indoor SuperMoto is outrageous and sheer fun.

At a glance you may ask, “What’s the big deal?” It’s surely not like riding a fire breathing 200 horsepower super bike at warp speed. True. However, when the temperature is in the teens and snow is on the ground, for 150 euro and a day of riding, it doesn’t get any better.

Indoor Super Moto is not only better laughs than a day at Wal-Mart, it teaches, humbles and makes good bikers even better. Feel, brake, clutch, throttle, body position and vision are just as important on a little kart track as it is on a 11 meter wide patch of tarmac.

I was able to ride in a training day with Lothar Schauer, who during pre race practice and qualifying sessions yelled unintelligible Deutsch. It helped as everyone on track thinks its them that’s breaking a rule of moto. Like all races on two wheels riders naturally push harder and go faster, make mistakes and in the end learn more than their last time. In 2013 a friend and fellow American chose to ride at Rottweil like he was at Oschersleben aboard a 600. The distance he flew off his bike was impressive; even more so is how he walked away unscathed and unrattled.

There are two favorite tracks on the schedule, which happen to have totally different layouts: Rottweil,  a village south of Stuttgart, and Celle, a smaller village near Hannover.

Rottweil’s surface is slick with a bit of elevation change and Celle has grippy tarmac and a front straight that is long enough to top out 4th gear. The standard Kart tracks are, for the most part, homogeneous - narrow, lined with stacks of old car tires and steel “I” beams that support the roof, with no sense of safety. It takes time to get over the “what if” questions, like “what if I fall into that wall that’s 3 feet from my apex?”

Adding to the fun is the air and track temperature; when it's in the '30’s tires like to slide and it takes a few laps and a good feeling in your butt to get up to speed. In Rottweil there is no real mechanical grip, absent of abrasive tarmac to interact with hot sticky rubber.

It’s entertaining to watch the manic search for where the grip starts and ends. There's sheen in almost every area and if it were wet, the track’s cement surface would be totally un-ride able. With rain tires mounted, somehow it works, letting you slide the rear just enough and trail brake the front to a fine point where your max entry speed is not an option but a hard rule.

The Master of Disaster

Every winter a complete nutter, Lothar Schauer, hosts an indoor Super Moto series around Germany, conducting training days and races up to 3 times a month. Describing Lothar as a nutter is a compliment; he would admit himself that he is one in every way.

Lothar holds a record for riding the longest wheelie ever while at the same time conducting a front wheel change. He performed that stunt live, at night, in front of millions of German’s sitting in the safety of their living rooms on the famous “Wetten Das,” a variety television show. Needless to say, riding fast around a Go Kart track for Lothar is really a non-issue, and he’s really good at teaching mere mortals how to do it.

It's the type of thrill seekers and nutters you meet at a place like this that helps make it fun.

The steed of choice for Lothar Schauer’s travelling Moto circus is the Kawasaki KLX 250. Shod with grip hungry rain tires and tuned suspension, the bike is more than capable of telling you to shut the hell up and hold on. "Flickable" is a good adjective to describe the nimble character of the KLX-250; yes, it’s a little wanna-be dirt bike with street tires to a layman, but on a 4 meter wide kart track everything comes into context. Not only is it a workout to control at speed, it’s a ballet of hand and feet movements that cannot be replicated anywhere else. Corner exits are all wrist, more so than at the grip-less entrance to the Parabolica at Hockenheim on a wet day. The art of going fast is the skill to feel the rear, accept that it moves under your rump and push it until its threshold of grip. To avoid sounding too pretentious, the bike is only 22hp with 15 ft lbs of torque, which for obvious reasons keeps you out of trouble. Super Moto requires the left side of your brain and not your right…or maybe it’s both?

At the track in Celle my good friend and Moto X-racer Daniel Sattler brings his skills from the dirt to the tarmac. From 4th to 2nd gear he practices the art of steering with the rear. Front brake and clutch levers in, clutch pedal to clicks down to 2nd as the front brake eases out with the clutch the rear brake pedal gently pushes down…body position and pressure on the inside foot peg helps the chassis accept the slight loss of rear grip as the rear wheel loses sync with engine speed.

After the front straight, the little KLX 250 brakes with confidence, but you'd better have a plan because everyone behind you (or in front of you) sure does. Nothing but the promise of a flying squirrel into tires and corrugated steel siding is there - if it is not done correctly. I can scribble down the process, but I am still searching to master it in practice by muscle memory.

It’s acceptable to have Moto-X maniacs still show me how to back it in and to have fumbled my way through the initial shock of learning something new, because Indoor SuperMoto is a blast. If you're looking for some winter training and fun on two wheels, leather up and find your way to a local track that offers the ping pong of motorcycle racing. Slower and small can be fun, and remember it’s not the size of the wave that counts, but the motion of the ocean.