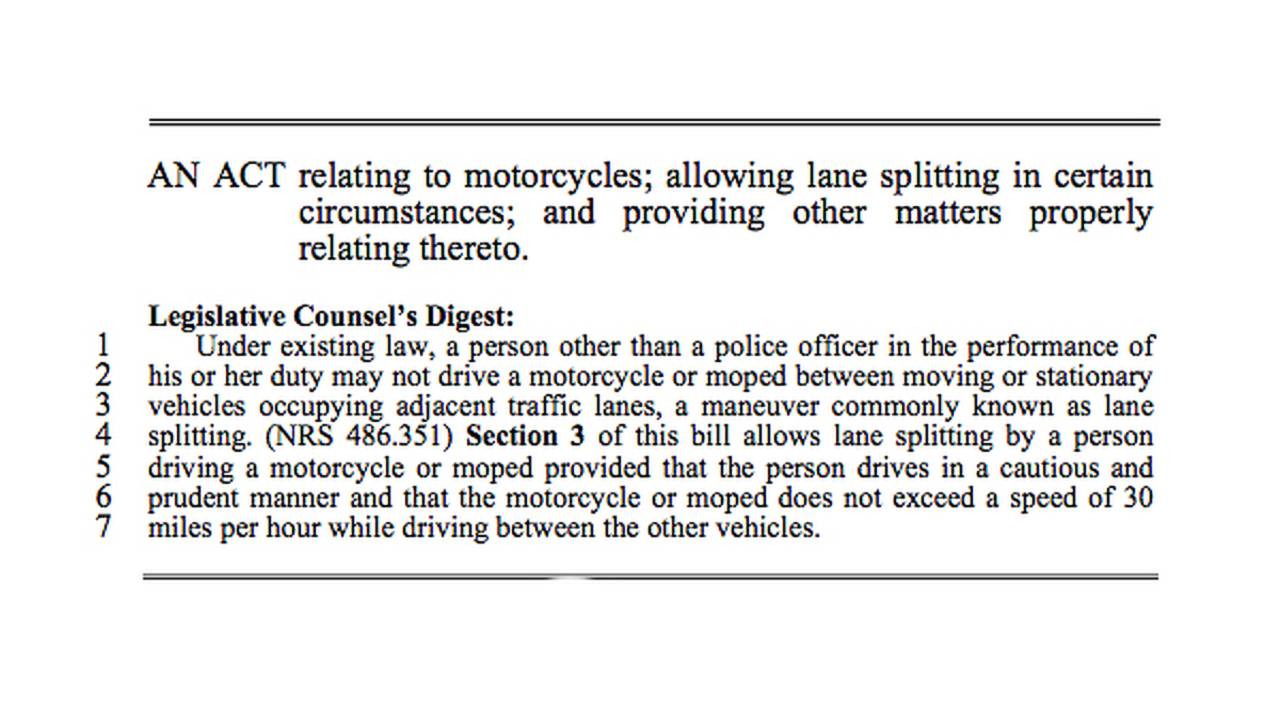 Nevada could allow lane splittingUPDATE: Lanesplitter from Twitter informed of us of this: "Interesting that Daly is saying it'll be decided by April...

UPDATE: Lanesplitter from Twitter informed of us of this: "Interesting that Daly is saying it'll be decided by April 23rd. I have written quite a bit on this, including a writeup (with video and hearing docs) of the recent Transportation Committee hearings on AB236 at http://lanesplittingislegal.co....

One of the issues with this legislation is in the hearing before the Transportation Committee (chaired by one of the bill's co-sponsors, Carrillo) there was more of this "it's at the person's own risk" talk - basically that if a drivers hits a rider while splitting, it will be the rider's fault even though the rider is splitting in a cautious, prudent and legal manner. I'd love splitting to be legal in more states (obviously) but this concept is ridiculous. Check out the first video in the link above for more on this.

A bill proposed to the Nevada state legislature could make lane splitting legal. Here's how much chance it stands and how you can help make it happen.

All of that is very similar to the California Highway Patrol's guidelines on legal lane splitting.

I interviewed Skip Daly, one of Nevada's assemblymen and a sponsor of the bill and here's what he had to say:

Me: Why was the bill proposed?

Daly: "The bill was requested by a person that we know. It's to help air-cooled bikes in the Nevada heat. Some side benefits are to help commerce, help the state and reduce overall motorcycle restraints."

Me: What opposition does it face?

Daly: "I don't know of any opposition as of yet — the first meeting on the bill hasn't been held yet."

Me: How can readers help make it happen?

Daly: "There's a bill tracking system in Nevada called "Nell." You can use nell to track bill progress and comment on it. Provide letters and testimony to the chairman, especially your readers who live in Nevada can help out."

Me: What is the timeline on it?

Daly: "Bill will be decided before the 23rd of April."

Me: Why do they think lane splitting merits legal permission?

Daly: "It's not permitted now, takes a law to allow it."

Me: Do they believe lane splitting increase motorcyclist safety? Why?

Daly: "It's at the person's own risk, there are arguments to allow it so its not unsafe. I do understand the liability side of it and the risks associated with it."