What It's Like to Ride COTA"It’s really difficult – one of the most difficult tracks in my career to understand," says Jorge Lorenzo of Austin's...

"It’s really difficult – one of the most difficult tracks in my career to understand," says Jorge Lorenzo of Austin's brand new Circuit of the Americas. MotoGP is racing there for the very first time this weekend, but I spent a day there last month. Here's what I learned. 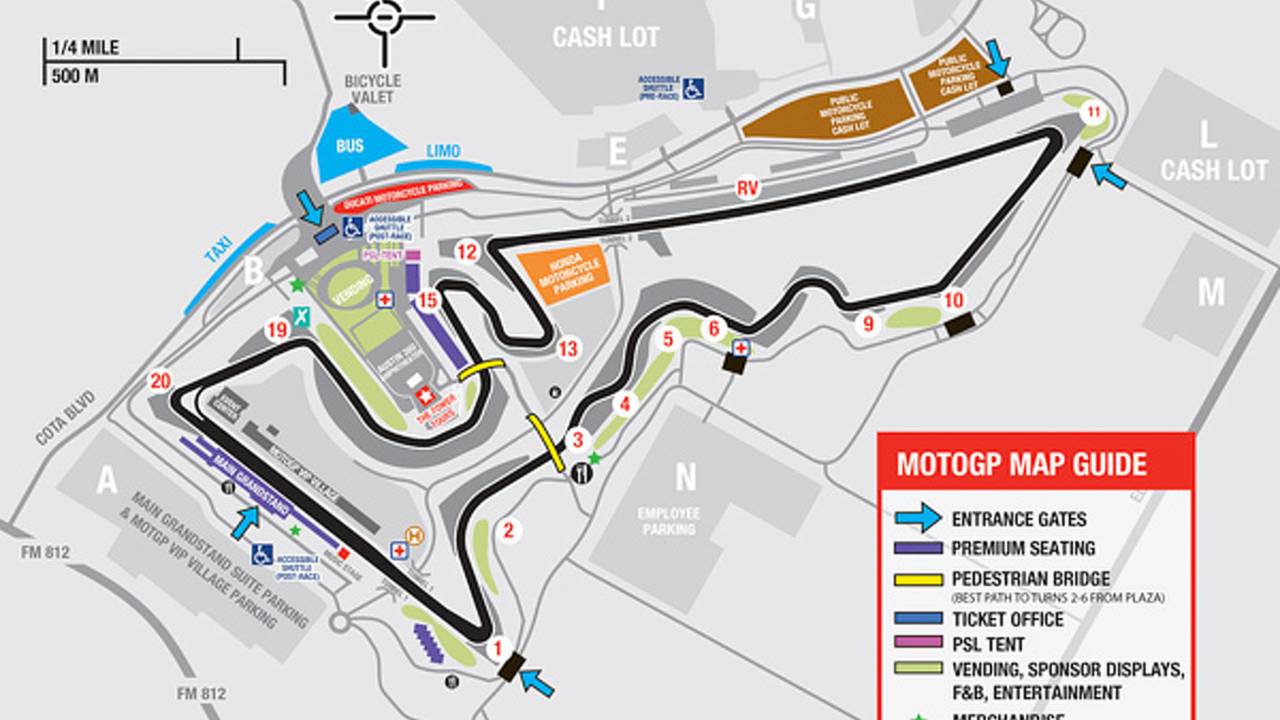 Looking at the track on paper, it's easy to make the mistake of dismissing it as flat or without unique challenges. And it does lack the geographic drama of tracks like Laguna Seca. But, what it gives away in big hills or historic provenance, it more than makes up for with clever design intended to confuse and challenge the rider, both mentally and physically.

"We managed to do about 30 laps here on a street bike, but it’s really technical," described Ben Spies, after checking with his mom that it was ok for him to say so. "There are so many drastic changes in the track — it’s world class."

I was there last month for the launch of the Ducati 1199 Panigale R. A bike so fast that, even on street-legal tires, it's just a second-a-lap slower than MotoGP's CRT class. I'm no GP alien, but as one of the first average motorcyclists ever to lap COTA, and doing so aboard the fastest production motorcycle ever made, I can hopefully offer some insight into what we're all going to watch this weekend. Let's break it down turn by turn: 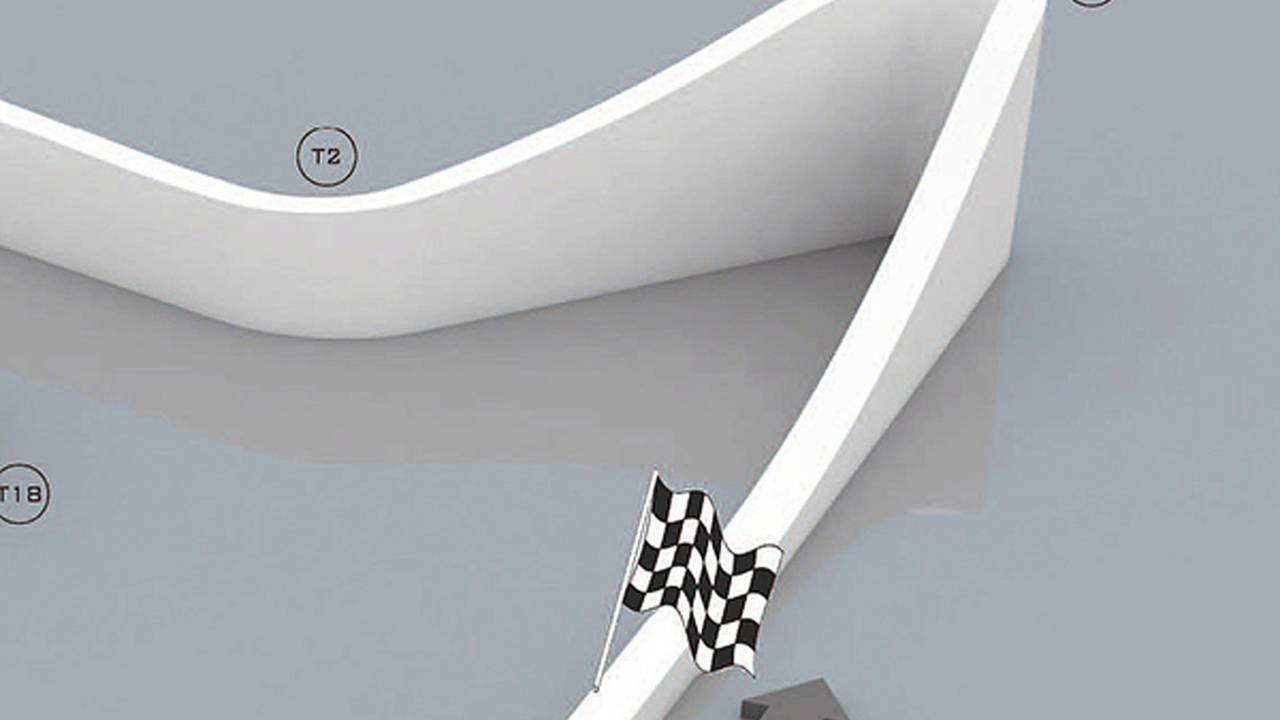 This is as close to a defining geographic feature as COTA gets. From the entry of the last corner to the apex of turn 1, the track climbs 130 feet, most of it in the final 200 yards of the start-finish straight. That climb, plus the oversize outside of the turn means you really, really, really have to wait on the brakes, despite speeds of around 175mph on that Ducati. I never once managed to wait long enough to brake, but you're going to see the GP guys holding their bikes flat out until what seems like far too late to come to the near-stop required by the near 180-degree corner. 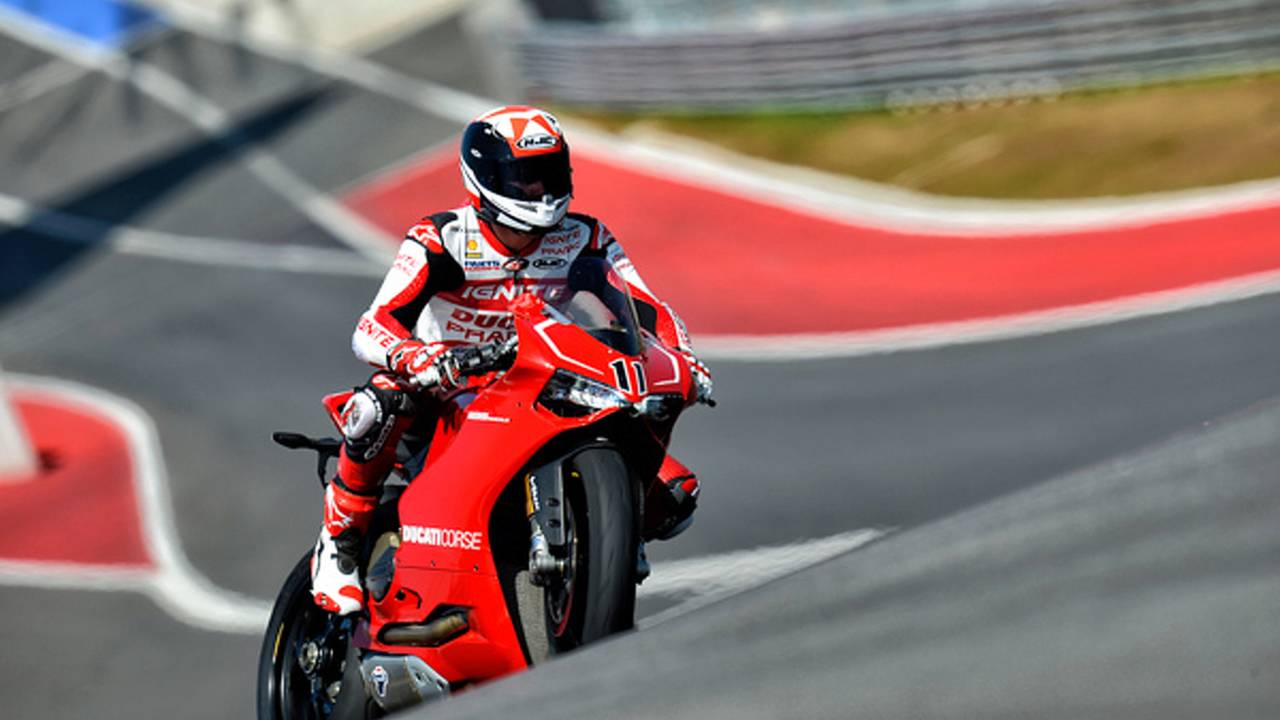 Yes, the braking zone for T1 really is that steep.

All that braking zone and the 52-foot width of the track at this point leads to multiple possible lines through this corner. Combined with that dramatic high-speed braking, I'd expect to see most of the races passes taking place here. 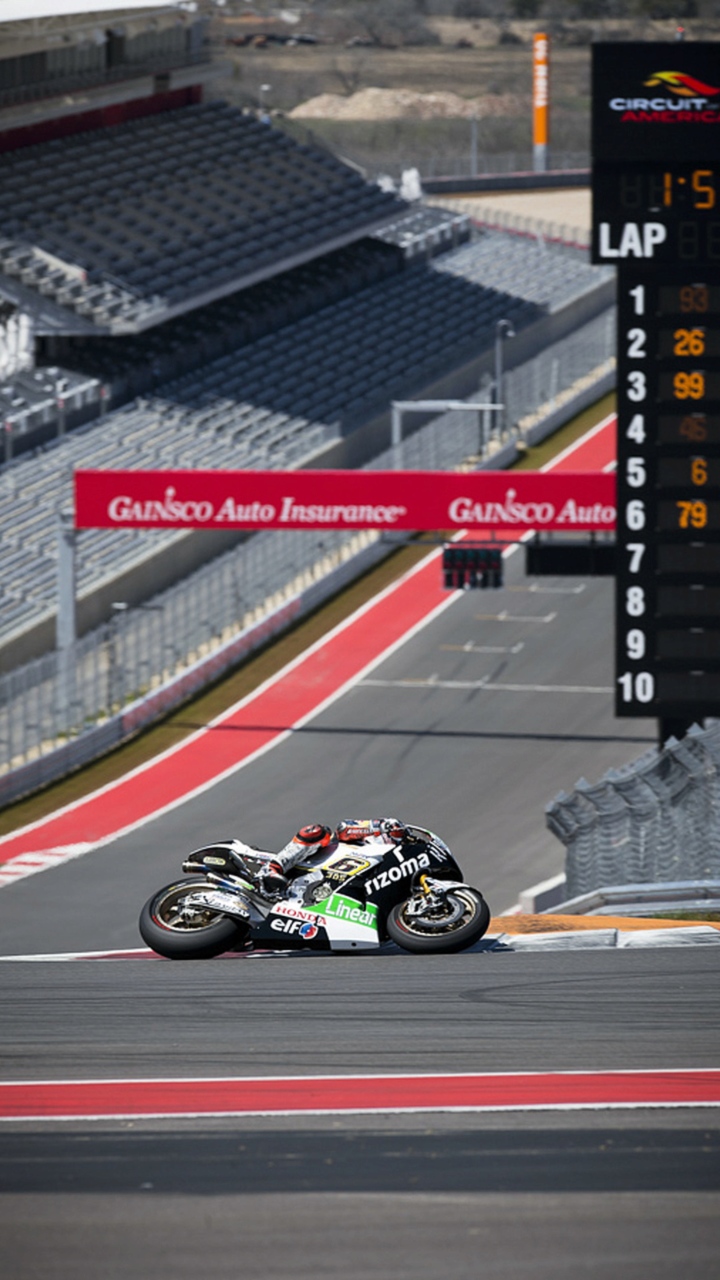 This image really highlights the degree of elevation, and how tight T1 is.

Dropping down to the very bottom of 2nd gear or the top of 1st at the apex, the corner then dumps you back down hill towards a flowing right hander. Hard on the gas from a virtually parking lot speed equals dramatic wheelies as the elevation just falls away beneath you. 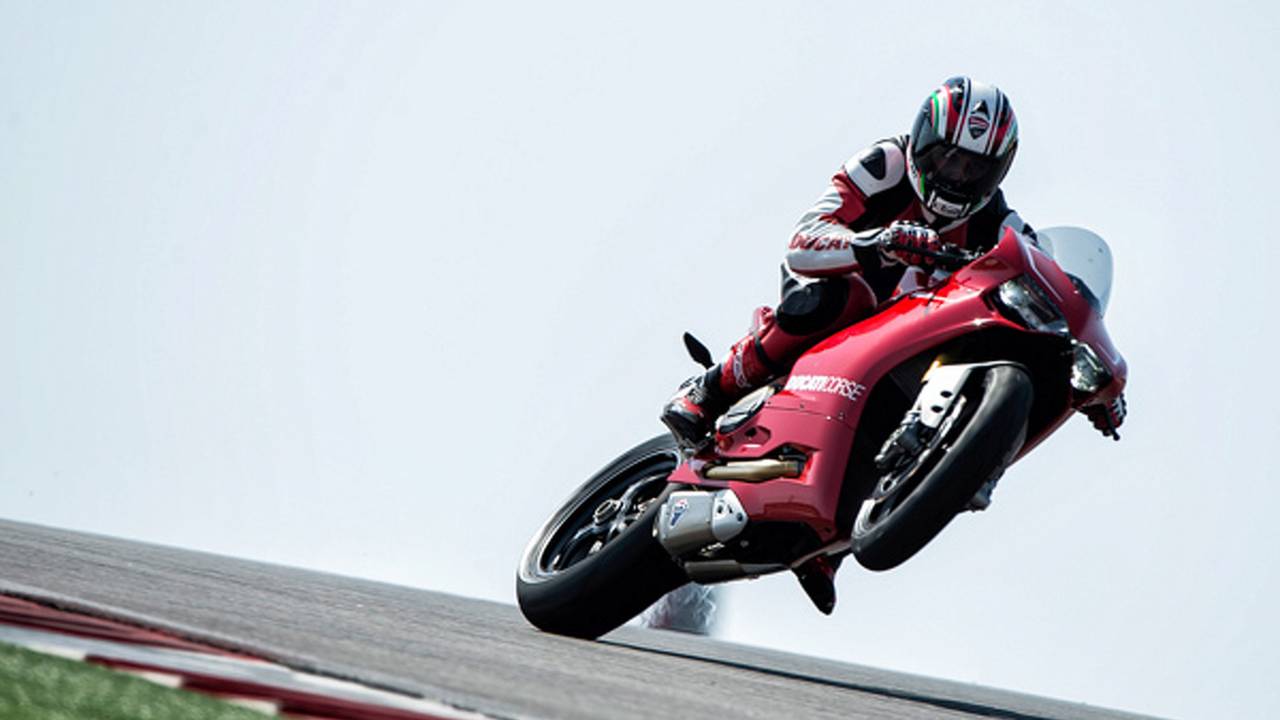 Full throttle in 2nd gear down a hill? Wheelie!

The track levels out to catch you as you sweep right in 3rd gear into Turn 2. I don't want to use the term "throw away corner," but this one's at least simple. Hard on the gas out of the exit and into 4th as you prepare for the sweeping sequence of turns 3, 4 and 5.

This is where you see riders diving through the flowing red, white and blue stripes that help give COTA its 'Murica! identity. Those strips combine with a subtle elevation change in each corner to distort perception and hide each subsequent corner. Making time through here actually becomes more about memorizing the layout and turning points than it is about seeing and reacting to what's in front of you. Much, much more challenging than it looks as a result, you literally can't see which way the next corner goes until you're in it. 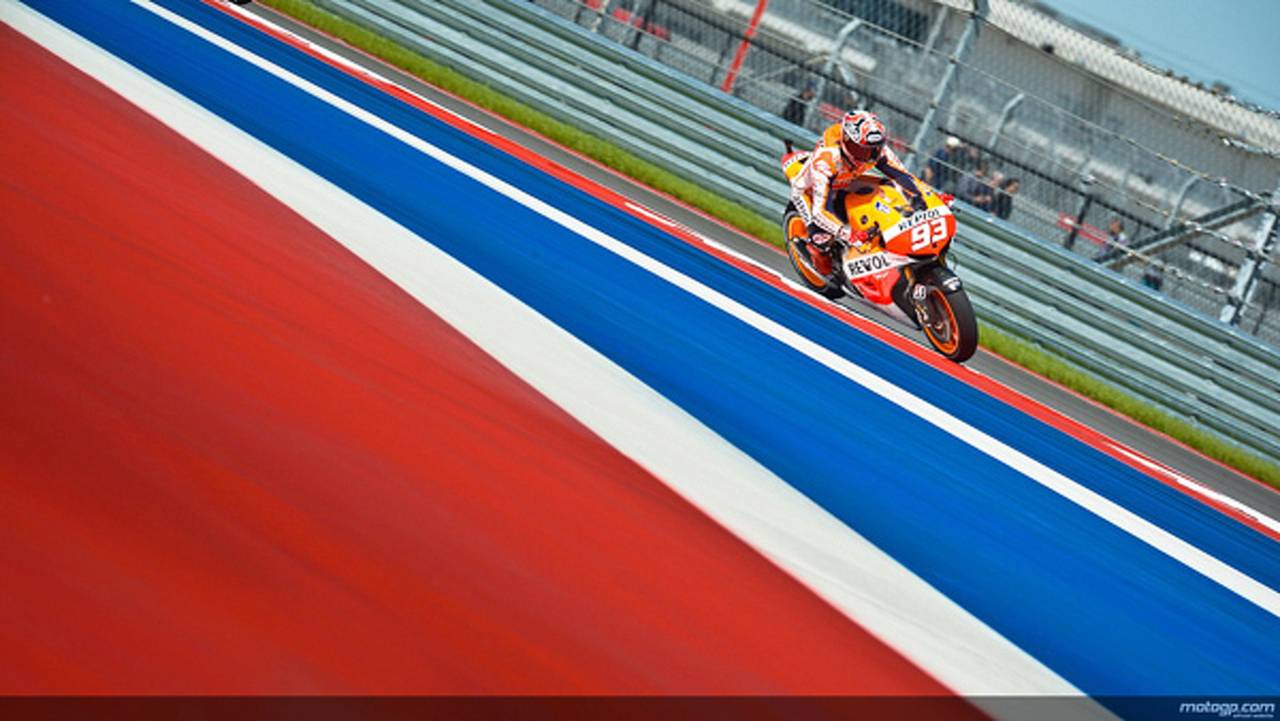 And this is another surprise. A fast, flowing entry draws you in a very high speed, then, just when you thought it was safe to get back on the gas, the radius decreases sharply just as it picks up a little elevation, compressing your suspension. Ground clearance is an issue here on street bikes. 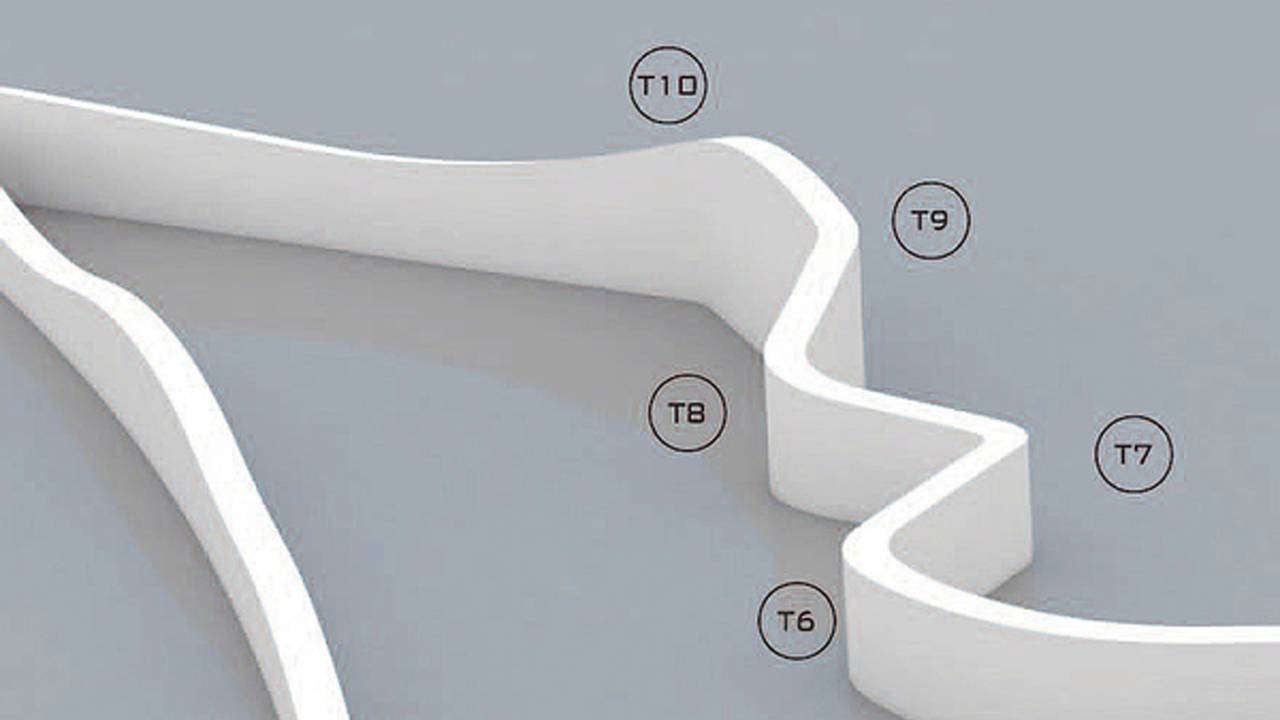 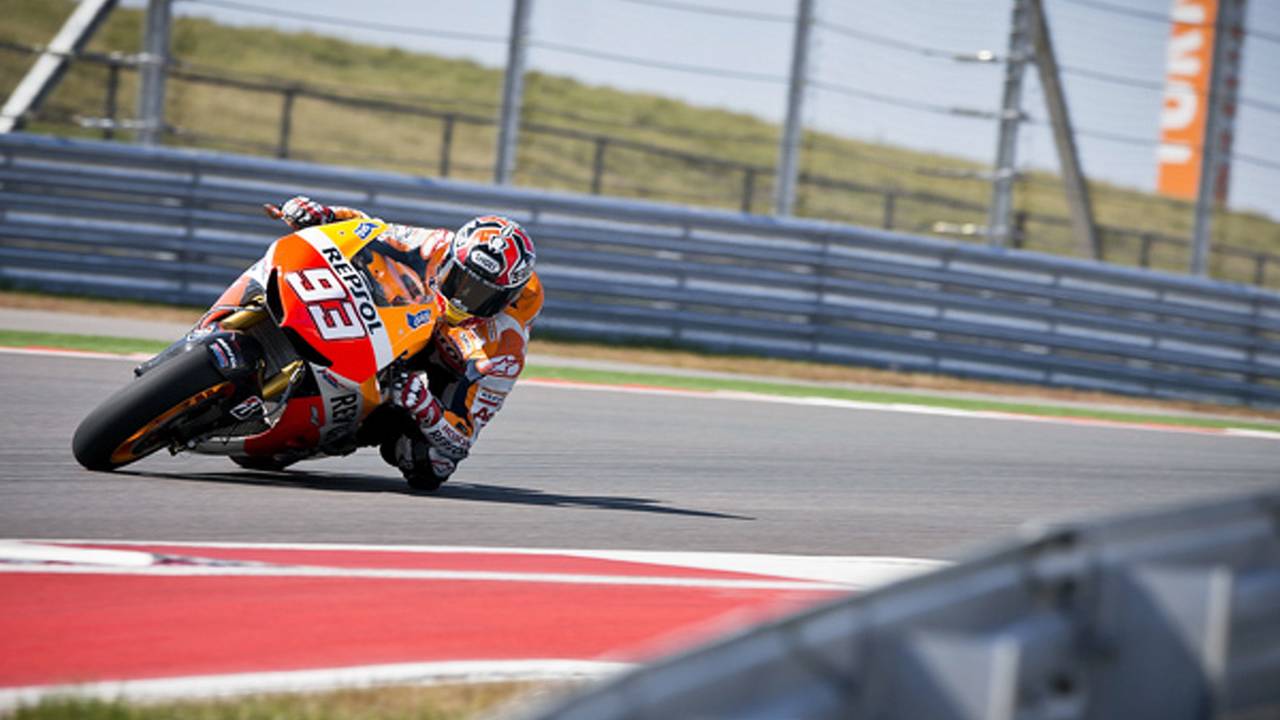 A straightfoward left, right combo, both nearly 90 degrees and taken in 3rd gear. As conventional as corners get here in Austin.

Now this one's different. Think of it as analogous to T1 at Laguna Seca in that you take it flat-out in 3rd gear, over a blind crest as the track falls away beneath you. Where, at Laguna, you just aim for the third telephone pole on the horizon and do a little praying, COTA's T9 lacks such references, again asking you to rely on memory and reference points. Stuff like this is why it's such a hard track to learn. 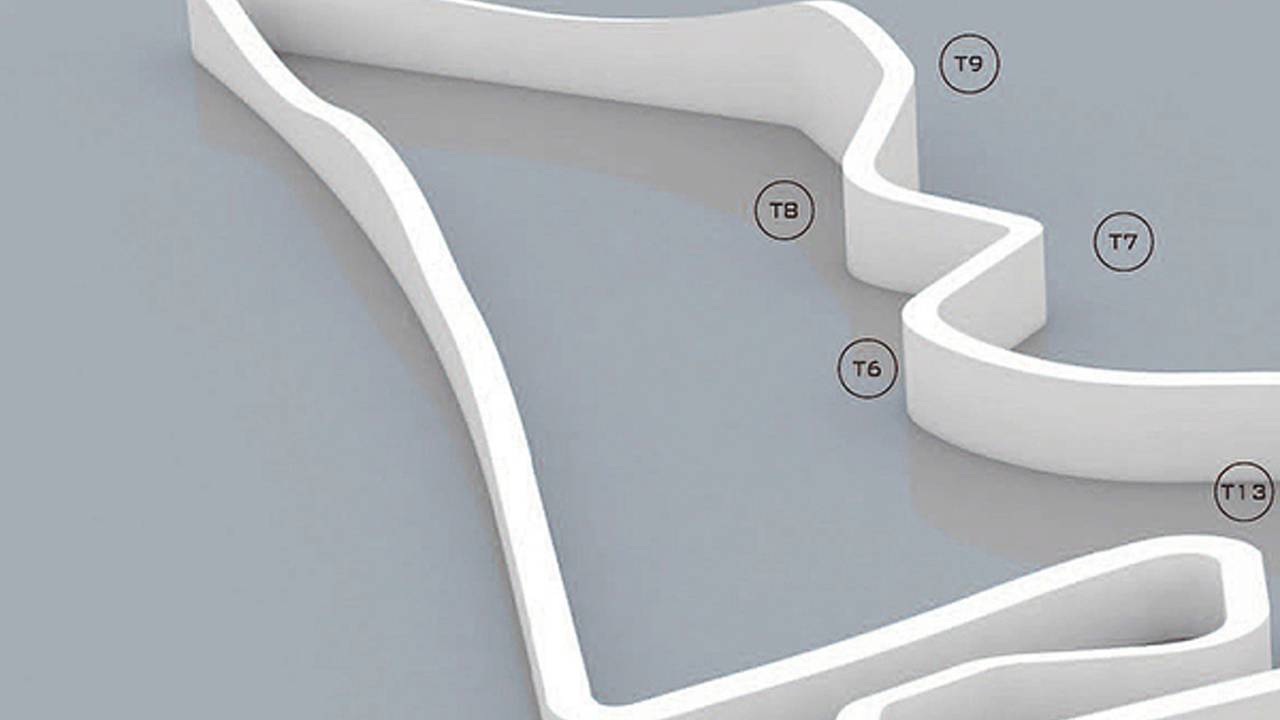 No-speed corners proceeding or immediately following crazy, high-speed straights seem to define COTA. In this near-180-degree, 2nd gear hairpin, you have to wait a little longer than expected to get back on the gas, as the outside of the corner approaches very rapidly. Once you're on that gas though, just hang on for dear life, catch gears and get as tucked behind the screen as you can. What looks like a straight is actually a slight crest over a subtle right hander nearly as long as the 3/4-mile straight itself. With the aid of a strong tailwind, this is where I went faster than I ever have on a bike before — 202mph. The MotoGP guys are hitting about 215.

BRAKE! Another very tight, 2nd gear parking lot corner where you have to shed ever last mph of speed you just gained on the straight. This brings you into the "Stadium Section" designed to pile bikes up on top of each other to give the 100,000+ expected fans something worth watching. You have to wait a long time on the way out to get back on the gas, but even when you do, keep it in 2nd gear for turns 13 and 14. 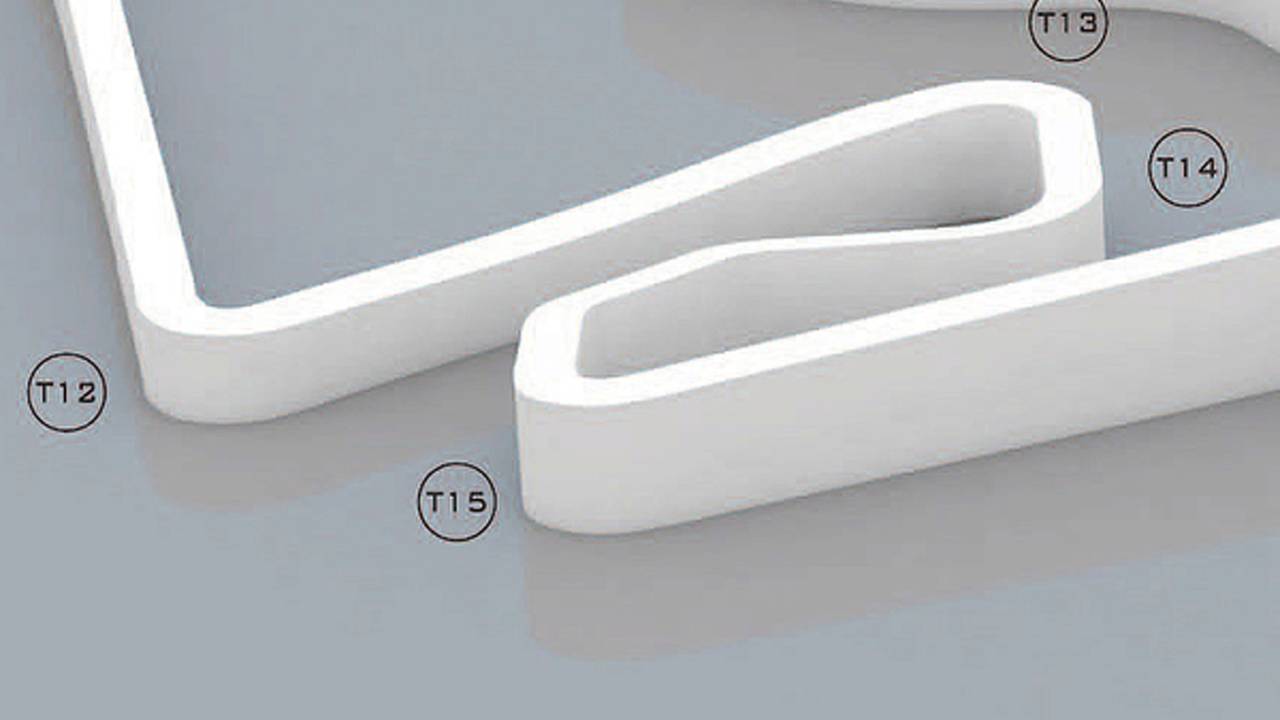 Two fairly simple right handers right in front of the fans. They're tight, but there should be some close action here. 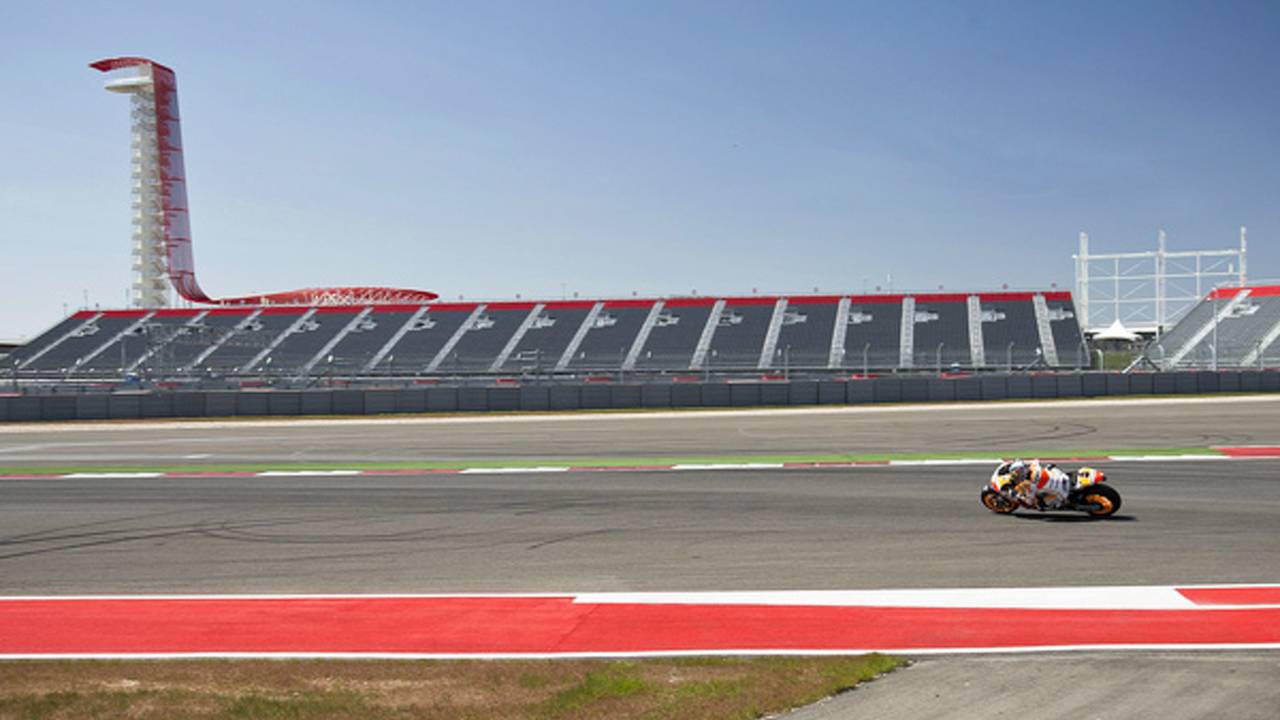 A tricky double apex. You need to wait to brake until you're actually past the first apex, then do so while leant over, running wide into the outside to set yourself up for the very low speed second apex. 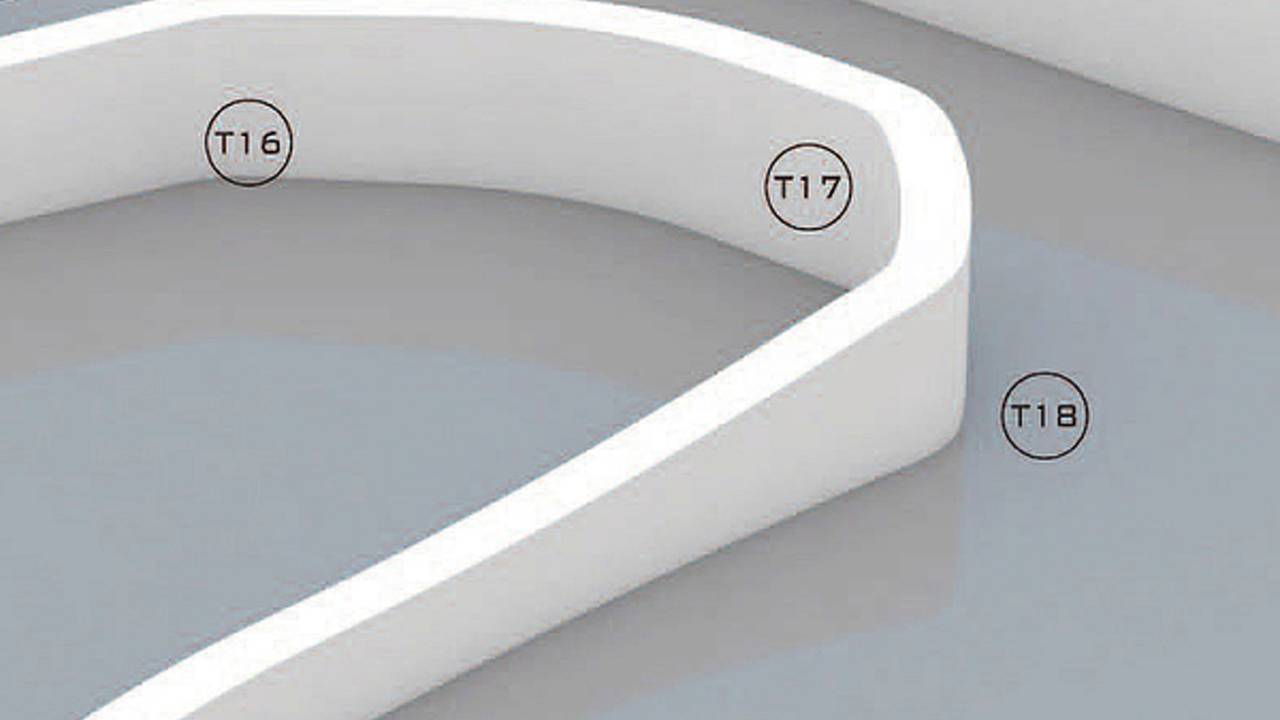 Not so much three corners, as one long sweeper with three apexes. When we were there, a strong headwind would blunt your entry speed on 16and push you into the curb on 17. In only a single day, I never really did figure out the proper line through here, but there's going to be one where you turn in once at 16 and stay there until winding back on the gas out of 17 and through 18.

If you see a shot looking straight down on the riders, its taken from COTA's 251-foot observation tower, which hovers over T17.

A downhill, left hander taken in 3rd gear allows more speed than it looks to drive you down the short straight towards 20. Back on full throttle the whole way down. 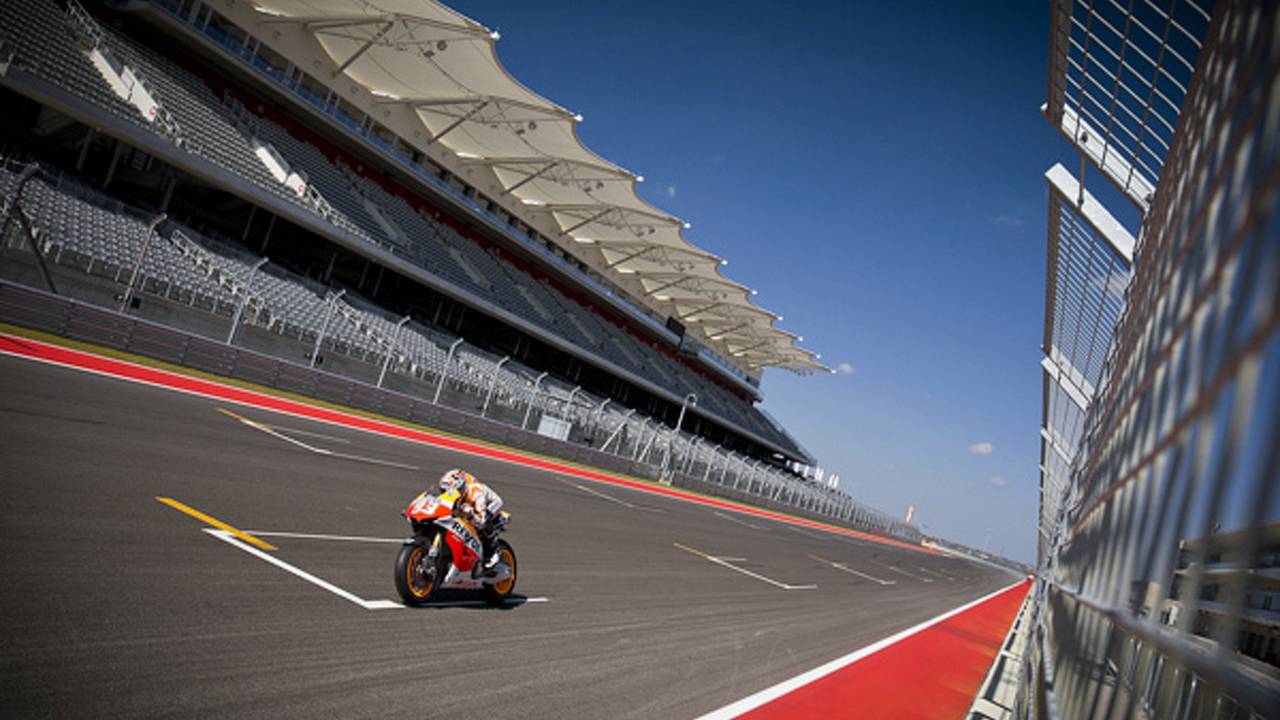 Then brake hard for this 2nd gear left hander. The exit is, again, tighter than it looks, so wait for the gas, then get on it hard and look all the way down the start-finish straight as you click through the gears, tucked behind the screen. Remember to wait till you can't wait any longer before sitting up and grabbing that right lever.