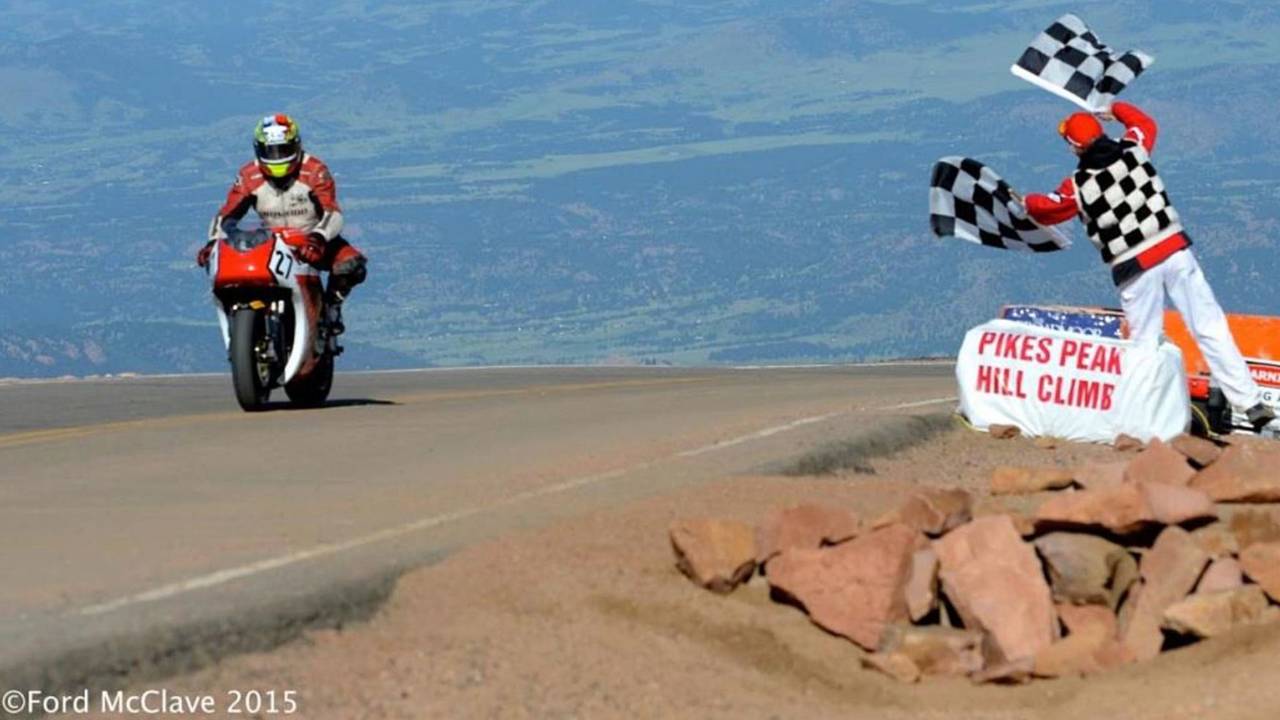 I first learned of the Ohio State Buckeye electric motorcycle team when reviewing the the 2014 Isle of Man SES TT Zero results.

MUST READ:  How Victory is Becoming America's Most Awesome Motorcycle Manufacturer | RideApart

Yep, McGuinness first. Anstey second. Barber / Buckeye..third. Wait. What?  Buckeye third? A group of geeky engineering college kids from Ohio show up at the Isle of Man and they finish THIRD?

Next, I find they are coming to PPIHC and I immediately know who I want to cover this year. I have a thing for the electric underdog it seems. This is a very different approach from past winners like Greg Tracy and the Ducati/Spyder Grips Livingston team. You are more surprised if they don't win or break a record.

I watched them from the time they began unloading their bikes for tech inspection. The first person I met was a confident young lady named Polina Brodsky, who came over to greet me and introduced herself.

If the space program was still in full swing, she'd probably be an astronaut. Brodsky is a Mechanical Engineering B.S. and the Technical Coordinator for the Ohio State Buckeye Current team, and she is very good at what she does. Over the course of the week, it became apparent that they all are. They'll be the ones building rockets powered by the sun when Elon Musk reads this.

Their unofficial finish time was an impressive 11:12.756. To put that into perspective, the unofficial results show a rider on a 190+HP BMW S1000RR in the heavyweight class—for example—finished with an 11:14:226

Q: Well done Buckeyes! You guys were fantastic! So calm and organized. You looked like you were just out there having fun.

A: Thank you!  Despite you catching us at the wee hours of the morning during practice, we were having a blast! We're a bunch of college students who get to take time off of school and internships to go race a motorcycle we built. There's nothing better than that.

Q: Are you happy with your team's performance and finish as a rookie effort?

A: I think, as a rookie effort, our performance this year (especially after a crash and rebuild a few days before practice began) is respectable. We finished the race with a fast time in the first half of the course, pulled an impressive 121 mph through the speed trap, and got our bike to the top of the mountain. Though we’re pleased with our initial performance, we did not meet our goal of breaking the motorcycle record at Pikes Peak. I think the team will continue to push for even better results in the future, no matter where we race. We are always striving to improve and build faster bikes.

Q: What was your overall impression of PPIHC as an event?

A: We loved being at PPIHC this year. The mountain is breath taking and the team enjoyed spending a week taking in its sights. The staff and officials were helpful and understanding of our needs as both a student and electric vehicle project, and we had a great time talking about our bike at FanFest.

Q: You guys set a pretty lofty goal for yourselves with a 9:45. After the race, is this still a reasonable time for you? What were the factors of the race itself that made it a challenging effort this year?

A: Even after the race, I believe this team has what it takes to build a bike that can beat the motorcycle record at Pikes Peak. It is a lofty goal, and is one that requires near perfect vehicle capability, rider performance, and course conditions to achieve. This year we had a bike to rebuild after a crash right before race week, an injured rider that needed quickly replaced, and the inevitable technical bumps and glitches that come from building a one-off prototype bike like this in less than a year. The team learned from this experience and now we know even better what it takes to set such a fast time on the mountain. I think a record at Pikes Peak is definitely still reasonable and achievable for us.

A: We didn’t have too many problems adjusting the bike to the mountain. The amount of time we put into getting our suspension tuned, electronics functioning, and powertrain working throughout the year definitely paid off. We had some bugs pop up here and there and experimented with gearing as race week went on, but overall we brought over a bike that was already well built and adapted for Pikes Peak.

Q: Current finished on the podium at the Isle of Man TT Zero. Unheard of for a college team! How did you pull that off? Like, including convincing the university to send you to IOM in the first place?

A: The fact that we were able to get a bike up on the podium at the TT (twice!) still blows our minds. That feat was pulled off with countless hours and late nights working on the bike, strong leadership and teamwork, and raw passion for this project from all of the team’s members. We don’t get paid to build these bikes and we don’t even get school credit for what we do on Buckeye Current, so the team’s achievements are a result of a group of students excited about EVs, racing, and motorcycles coming together and committing to one common goal. The university has been great in supporting us in all of our racing efforts.

Q: What are the differences between your effort here and that at the Isle of Man?

A: The TT is much more of an endurance race than Pikes Peak is. The TT course is longer, faster, and has much fewer turns. The object of the TT is to cram as much energy on the bike as possible and then make sure that its other parameters (aero, weight, etc.) are optimized so that the bike can make it around the course. Our rider has the throttle wide open for almost the entire lap, and there is little acceleration and deceleration. The challenge is maintaining as high of a speed as you can while ensuring that there is enough energy in the battery pack to maintain it.

Pikes Peak is completely different. At Pikes Peak, you are constantly accelerating and decelerating through turns. Because of this, our attention for this race was much more targeted at suspension and handling than at the TT. Powertrain wise, the focus for this race was much more on peak power capabilities and thermal performance. Because our rider repeatedly accelerates after every turn, high currents are drawn from our battery pack throughout the race. There is potential for our motor, inverter and pack to heat up quickly, and thus there was more concentration on thermal understanding and management throughout our design and build of RW-3.

Q: Who is your competition and how do you, as a university team, compete with factory funded efforts?

A: We like to think of our competition as being more than just other universities with electric motorcycle programs. Buckeye Current usually competes against professional teams, which means that Buckeye Current usually competes against professional engineers and budgets. In order to be able to build vehicles that rival our well-funded competitors', the team uses a requirements based approach to understand what the vehicle must have in order to achieve its target performance. This includes basic weight, suspension, power, energy, handling, safety, and data logging capabilities. Each target is simulated and analyzed so that we can identify which features a competitive bike has to have. With sensitivity analysis and ranking of focus areas on the bike, we are not only able to hone in on which bike characteristics we should focus engineering effort on, but also which ones we should concentrate our budget on. The entire build refers back to these requirements to make sure that we are focusing time, effort and money only on those items, which will make the bike achieve its target time. With rigorous attention to requirements generation, we are able to build vehicles that can compete against factory funded efforts.

Q: Who are your riders and how did you recruit them?

A: Our original rider for this event was Robert Barber. Rob has been riding for the team at the TT since 2013, and we were excited to bring him over to the US to ride for us at Pikes Peak. Unfortunately, a crash a few days before the hill climb injured Rob and left him unable to compete in the race. Rob was a great sport through all of race week. He remained optimistic, helpful, and cheerful despite the heartbreaking injury that kept him from competing for us this year.

Our replacement rider, Joe Prussiano, stepped in a day before practices and started to ride the bike when Rob was injured. The team is grateful for his quick response and willingness to ride for us on such short notice.

Q: Regarding racing experience, how did a basically non-motorsports group of kids get into all of this?

A: Our team has a great mix of interests and experience levels on it. There are people who join because they love EVs, but know little about motorcycles. We get members that have been riding for years, but want to get involved with more racing. Others join because they love bikes and want to be around a hands on engineering project. The team has so much to offer to such different interests and experience levels, that we get a wide variety of participants. This, combined with the fact that many members on the team were able to go to the IOM TT with our last two bikes, made the Pikes Peak experience one that we were able to easily get into.

Q: How many women on your team and did you feel the respect that you so deserve?

A: There are currently about five women on Current, and I feel that we definitely receive respect from both members of the team and those outside of it. It has been rewarding to see the female technical involvement in the bike grow in the past few years.

Q: Who else is on your team that made this all possible and what was their role?

Fantastic! There you have it. Buckeye, congrats, thanks for your time and we hope to see you back at PPIHC next year for the 100th anniversary and another crack at the record!