Meeting Barry SheeneAs a teenager growing up I had two heroes. And even today they both still mean a lot to me for what they did and for what they...

As a teenager growing up I had two heroes. And even today they both still mean a lot to me for what they did and for what they stood for.

One is the front man for a notorious British punk rock band who, at the height of its fame, always spoke his mind no matter the consequences and today he’s still going and walks that thin line between total insanity and pure genius.

The other was a man who raced Grand Prix motorcycles more than 30 years ago. He had Donald Duck’s face painted on his crash helmet, there was a hole drilled in the front of that helmet so he could smoke a cigarette on the race grid just before the start and he always carried the number seven on his bike. He won his first motorcycle championship at just 20 years old and his first world title, the Formula 750 series, in 1973.

He broke his collarbone, thigh, arm and all of his ribs when the rear tire on his Suzuki TR750 exploded at 180mph during qualifying for the 1975 Daytona Grand Prix. His shattered leg needed an extraordinary amount of metal pins to fix it, but six weeks later, although still on crutches, he was straight back on his Suzuki winning races. He went on to win the World 500cc Championship in 1976 and 1977. 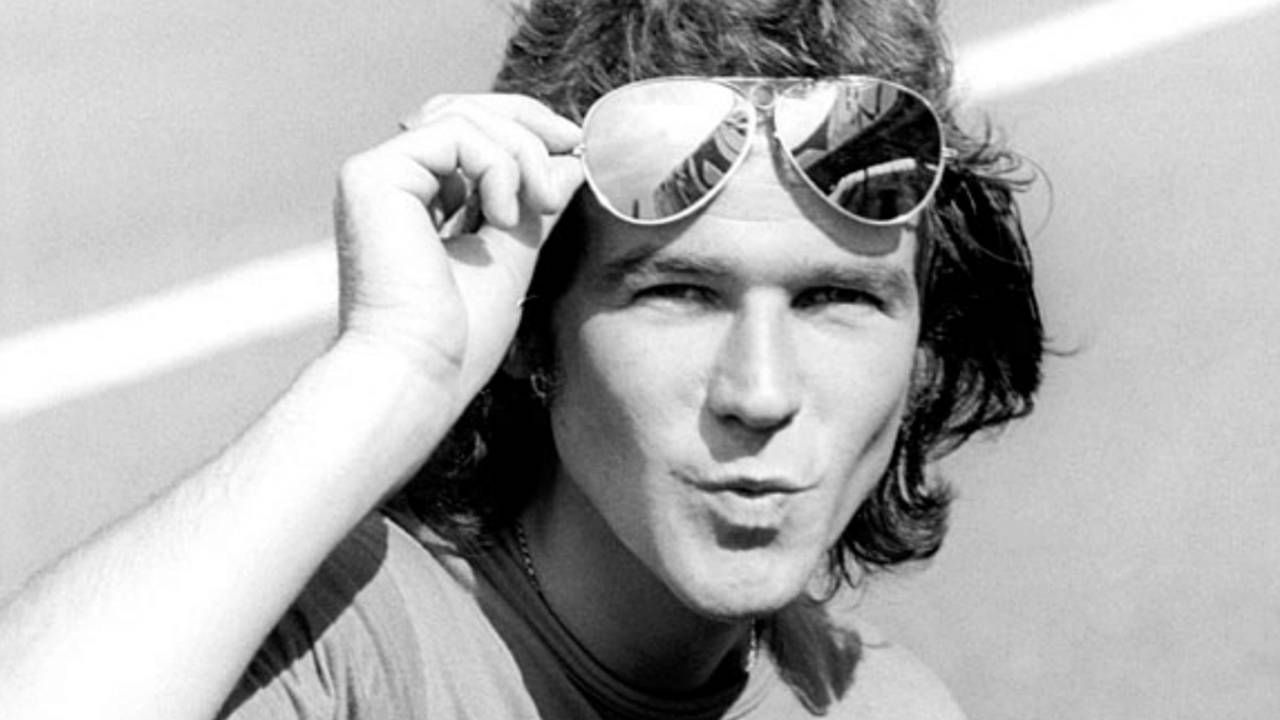 This extraordinary racer’s name was Barry Sheene. Sadly he died way too young at the age of 52 from cancer 10 years ago. But I still think of him every single time I watch one of today’s MotoGP races. He was not his generation’s most successful rider but he certainly did more to bring Grand Prix motorcycle racing to the public’s attention than any rider had done before and maybe ever since.

He was good looking and was known back then as a real ladies man. Sheene loved the girls as much as they loved him. Kids, like me, had pictures of Sheene and his Suzuki RG500 on their bedroom walls. He was famous enough to make front-page news – this was before celebrity sports superstars had ever been thought of — and he appeared in TV advertisements for his sponsors, which at the time was a first for any sportsman let alone a motorcycle racer.

The camera loved Sheene and the media knew they would always get a great quote from him.

When a reporter asked Sheene at his hospital bedside after the 1975 Daytona accident how it felt to come off a bike at 180mph. Sheene looked at him for a second and then grinned: “How do you think it felt? It bloody hurt.”

If you take the time to watch footage of 500cc World Championship motorcycle racing in the 1970s, it shows what a very long way we have come. All of the riders look incredibly vulnerable in clunky full-face helmets and paper-thin one-piece suits and crappy gloves. Sheene openly admitted in the wet he wore washing-up gloves under his race gloves.

For all of his playboy image and joking about, Sheene was an early advocate of rider safety and famously led a group of Grand Prix riders who threatened to boycott the 1975 German Grand Prix at the infamous Nurburgring. They were unhappy about the number of straw bales the organizers had provided in case of accidents at the circuit. After his Daytona accident, Sheene also worked closely with motorcycle attire company Dainese in the development of back protectors for riders.

At the top of his game Sheene dominated 500cc grand Prix racing with his works four-cylinder RG500, winning 11 Grands Prix and two World Championships in 1976 and 1977. But it was his battle in 1978 and 1979 with American newcomer Kenny Roberts that will stay with me forever. Those were two seasons of the closest, hardest fought motorcycle races that I think I have ever witnessed.

Dorna – the official organizers of MotoGP – would never sanction today some of the racing moves that Sheene and Roberts pulled on each other in those two years. And remember this was a time when the bikes had no electronics and no special tires. Just an immensely powerful engine and a super light frame. The rest of it was down to the rider. If you wanted to race close – and they did, really, really close — you had to put your full trust in the abilities of your fellow competitors.

It was at the 1979 British Grand Prix, at Silverstone, that is probably my favorite memory of Sheene, when he was his racing best. Both he and Roberts were in with a chance of the world title and it was evident there was serious rivalry between them. Sheene had upped his game for Silverstone but it was not enough to catch Roberts who snatched pole position. Minutes before the start, Roberts’ Yamaha blew a seal and sprayed oil on his gloves causing his hand to slip on the throttle throughout the race.

But within minutes, it was Roberts and Sheene that broke away from the rest of the field and for the next 20 or so laps they rode side by side, ran down the inside of each other, out braked the other in every single corner trying to find a way to gain an advantage. I think they swapped the lead something like 10 times. At one point, Sheen thought he had got away from Roberts and looked over his shoulder and gave Kenny the middle finger.

In the end though, victory fell to Roberts who crossed the line a mere three hundredths of a second faster than Sheene. In my opinion it was Barry Sheene’s finest race.

I got to know Sheene in the mid-1980s, well after he quit motorcycle racing. He’d taken up car racing for a company I was working for and we loaned him vehicles when he came back from his new home in Australia to visit the UK.

Initially, I was in awe about meeting him. And when we met he chatted away to me, an openmouthed 20-something office junior, but he’d noticed that I hadn’t said a word or replied to anything he had asked me.

“What’s the matter mate? Lost your tongue?” he said.

“No, but you raced motorcycles and I watched every race on TV and I saw you win. You were amazing,” I blurted out sounding as stupid as I probably sounded.

“No mate,” he said. “I wasn’t amazing I just rode a motorcycle faster than the next guy.”

Our paths continued to cross over the following years and I saw Barry for one last time at the Goodwood Revival meeting in 2002. This is a huge annual British cavalcade of motor racing where world famous drivers and riders turn up to race historic cars and motorcycles.

Sheene had sworn never to get on a bike again after retiring in 1984. But, despite being diagnosed with cancer a year earlier, somehow the Goodwood event organizers had persuaded him to come over from Australia and put on his famous crash helmet for one more time.

So when I saw Barry in the hotel bar late at night before race day I jokingly asked him: “What the hell are you doing here Barry?”

And do you know what? He did just that. He led and won that classic bike race with a 1950s Norton Manx, despite some stiff competition including another motorcycle Grand Prix champion, Wayne Gardner, who was riding a Matchless.

After crossing the finishing line Barry took off his helmet and did one more victory lap, waving and smiling to an appreciative and applauding crowd around the circuit. I tell you, it was like 1976 all over again.

The world of motorcycling racing today is definitely a poorer place without Barry Sheene.