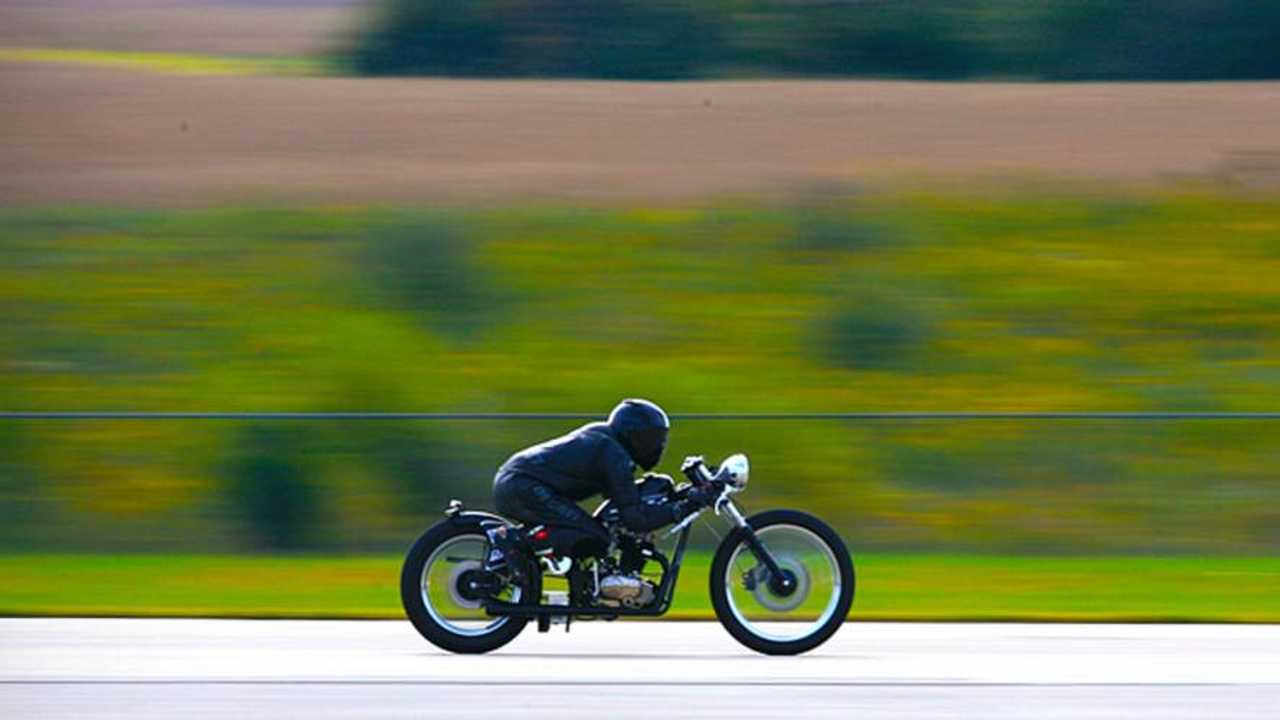 “We want people to get their hands dirty again,” CCW founder Scott Colosimo told me over IM this morning. “We want people to beat this record. That’s why they’re publishing complete details of the work they carried out on one of their Heists to set two new Land Speed Records at the Ohio Mile. Here’s those details, as written by the man that built this motor. — Ed. Humble Beginnings ...

“We want people to get their hands dirty again,” CCW founder Scott Colosimo told me over IM this morning. “We want people to beat this record. That’s why they’re publishing complete details of the work they carried out on one of their Heists to set two new Land Speed Records at the Ohio Mile. Here’s those details, as written by the man that built this motor. — Ed.

The origins of the CCW Heist and Misfit engines date back to the original Honda design from 1975, for an economical and durable work horse motorcycle targeted at developing countries.

The Honda CG125 had a unique cam, rocker and push rod layout that featured a single cam lobe that actuated both the intake and exhaust valves at the same time. The benefits of this design allowed the cam lobe and its high pressure rocker follower to be run in an oil trough, solving the cam lobe lubrication and cooling difficulties of the overhead cam layout. The remaining top end parts, including the rockers, valve tips and pushrod ends, only needed a minimal amount of oil for a long service life.

Improvements and developments through the years led to the redesign of the CG engine used by CCW to include a counterbalancer, electronic ignition and a bore and stroke of 67mm x 65mm, for a displacement of 229.17cc.

The Need for Speed

As die hard motorcycle racing enthusiasts, we were intrigued by the untapped potential of the engine, and decided to flex our tuning muscle with the goal of competing in speed trials for land speed record attempts.

In powering up the engine, the first stage would improve engine breathing with a new camshaft profile, higher flow carb, exhaust and ports, and increasing compression with a working squish band in the combustion chamber. Stage two for next season would include increasing bore diameter, adding more compression, lightening the crank and bottom end, and custom ignition timing.

Tuning began with the camshaft profile, and how it worked with the engine breathing as a whole. Having a single cam lobe requires that both the intake and exhaust valves to have the same lift and duration, not what one would expect as the ideal design for a performance engine! As development would reveal, this was not necessarily a deficit since most racing/performance engines breath best with a very nearly symmetrical valve timing.

Several prototype cam profiles were tested in the engine with a stock cam that was built up with metalized epoxy, and ground to the desired profile. Increasing the duration of the cam would be centered on the existing lobe centerline, due to the fixed location of the lower rocker arms.

After testing our mock cams, two cam profiles were selected and sent to our cam grinder for replicating as a hardweld, and reground onto stock camshafts. The first, a low-lift grind to test as a drop-in cam for a mild performance increase, and the second, a full race grind for our Stage One and Two race engines.

There is always a compromise in choosing valve sizes in a performance engine. We would want the biggest intake and exhaust valve that will fit in the head without interfering with the port flow, and without interfering with each other during the overlap period when both the intake and exhaust valves are open. Stock valve sizes were chosen, but because of the increased cam duration, required that the valve seats be sunk into the head to give clearance during overlap so that the valves don’t hit each other.

Port flow was nevertheless increased over the stock head by using a bowl cut from the valve seat to the combustion chamber, and using a full radius Serdi valve seat cutter. Further port flow increases were achieved with a pocketed port roof near the seat, and slight narrowing of the valve guide bosses.

Although a good match for the stock engine’s breathing capacity, the stock carb was exchanged for a larger Mikuni VM32, mated to a custom shorter intake tract. The 30mm intake port size was basically unchanged.

Critical to the combustion chamber is to achieve a working squish band, an area around the circumference of the piston that comes in close contact with the head during top dead center. A piston to head squish clearance of .030”, using the stock piston, was achieved by machining down the cylinder top two millimeters, with the added goal of increasing engine compression.

With the maximum valve lift increased to .370” and the now higher RPM engine breathing, the stock valve springs were replaced with R/D racing spec. springs, preload shimming to be tuned in by testing on the dyno. Durability was addressed by rebuilding the stock aluminum push rods with 4130 chrome moly tubes, shorter by the cylinder shortening modification, and shorter yet some more because of the sunken valve seats.

Wrapping up our Stage One engine is the exchange of the stock catalyst equipped exhaust with a 1.5” OD head pipe spring mounted to a slim taper reverse cone megaphone.

Getting Down and Dirty

Since our ultimate goal was to go fast, we chose a speed trial classification that allowed us to modify Tha Heist chassis with a smaller frontal area, critical for top speeds. Modified chassis classes allowed us to fit lowered clip on handlebars and high placement rear set foot pegs, allowing the rider to get into an aerodynamic tuck. The chassis would allow us to race in multiple classes, including Modified Pushrod Gas (M/PG-250/4), Modified Pushrod Fuel (M/PF-250/4), and with the addition of fairings, Modified Partial Streamlining Pushrod Gas (MPS/PG-250/4) and Modified Partial Streamlining Pushrod Fuel (MPS/PG-250/4).

Fire resistant fuel lines and an electric fuel pump were added for safety, and a hydraulic steering damper for an extra measure of stability on rough courses.

Essential to successful development is testing and tuning our new engine on the dyno. Time was booked at Northern Ohio Ducati/Triumph’s Dynojet 250i to dial in the carb jetting, valve spring preload and road speed gearing. Comparisons of different carbs and exhausts were also tried.

Scott, with the Heist on the Dyno.

Running the bike on the dyno allows dynamic testing and observation that can’t be achieved on the road. Fuel misting at the carb inlet at high RPM indicated intake valve float, and several steps of adding spring preload rose the redline from 8500 to 9200 RPM. Carb jetting changes were done after seeing the air/fuel ratio curves using the dyno’s built in gas analyzer.

Our first outing with tha Heist LSR was with the East Coast Timing Association’s meet at the Ohio Mile, in Wilmington, Ohio. With CCW’s founder Scott Colosimo as rider, our Heist broke the existing records in each of its two runs of the weekend, the first at 94.718 MPH in the unfaired Gas class, and the second run of the weekend at 95.599 MPH in the Fuel class.

We’re already planning to build our Stage Two engine for next season, and are looking forward to more speed!

This article was originally published on CCW's website and is reprinted here with permission.