Why Every Deus Bike Sold Loses the Shop Thousands

Deus Ex Machina Customs builds some of the finest one-off motorcycles in the world. The shop first came onto the scene in 2006 with a shop in Sydney, Australia, and in less than a decade grew into an empire with a global presence. In addition to successful shops in Bali, Venice, California, and Camperdown, New South Wales, Deus has swanky retail storefronts in Tokyo and Milan with a shop in Paris poised to open in the near future. Custom motorcycles are at the heart of the trendy moto-lifestyle brand’s operation, and are a key element of what gives Deus its unique and ultra hip identity. But the vast majority of the breathtaking one-off two-wheeled creations coming out of Deus Ex Machina shops are sold at a loss of tens of thousands of dollars despite each machine boasting a price tag of somewhere between $40-100k.

If Deus builds some or the world’s finest custom machines, just how is it that an $80,000 bike loses the company money? How is this sustainable? As a privately-held company, Deus Ex Machina doesn’t have to release sales figures, but after doing a little bit of research and a bit of math, this unorthodox marketing strategy becomes increasingly sensible. It probably won’t come as a surprise to hear that the global lifestyle brand was founded by someone with ample experience in starting a wildly successful lifestyle brand and apparel company. Dare Jennings founded Deus Ex Machina with funding he came into after selling his substantial share of the Australian Surf Apparel brand Mambo Graphics, which Jennings cofounded in ’84 and which supposedly sold for $75,000,000. 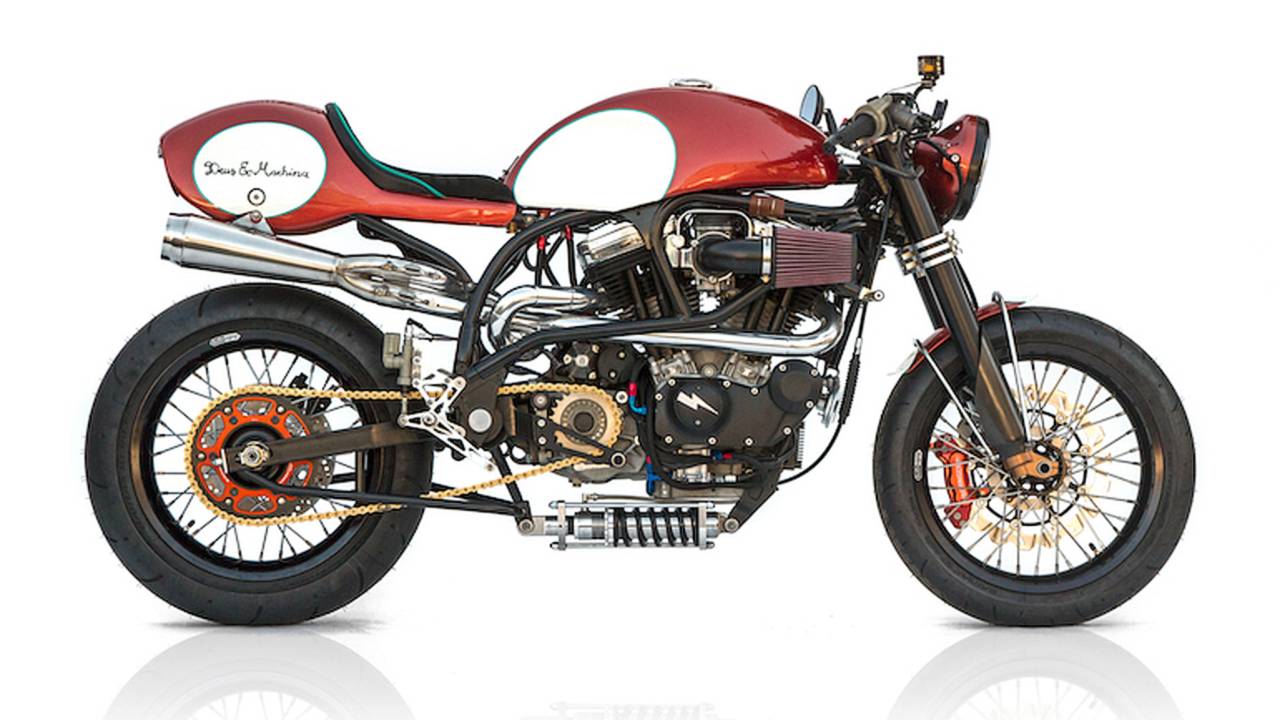 Where The Cost Comes From

The scoots that Deus builds are all a result of hundreds of hours spent researching, planning, fabricating, and wrenching. Deus’ US motorcycle design director, Michael “Woolie” Woolaway, is responsible for many of the shop’s finest builds. While Woolaway is a master practitioner of a myriad of crafts involved in churning out elite one-off bikes, he’s probably best known for his seriously epic sheet-metal work. Woolaway routinely spends 400-500-hours hand-building masterpieces in the form of customs’ fuel-tanks and tail-sections.

For the sake of understanding how a project ends up costing six-figures to create, let’s hypothetically say Woolie is only being paid $150 an hour. If he spends 500-hours on a tank and tail section, the cost of the build is already up to $75,000 just for these two parts, before any other overhead expenses are factored in. Not to mention $150-per-hour is probably a fraction of what Woolie’s time and skills are realistically worth. Obviously this is an extremely conservative calculation. At the end of the day Woolaway can only build half a dozen bikes a year too. 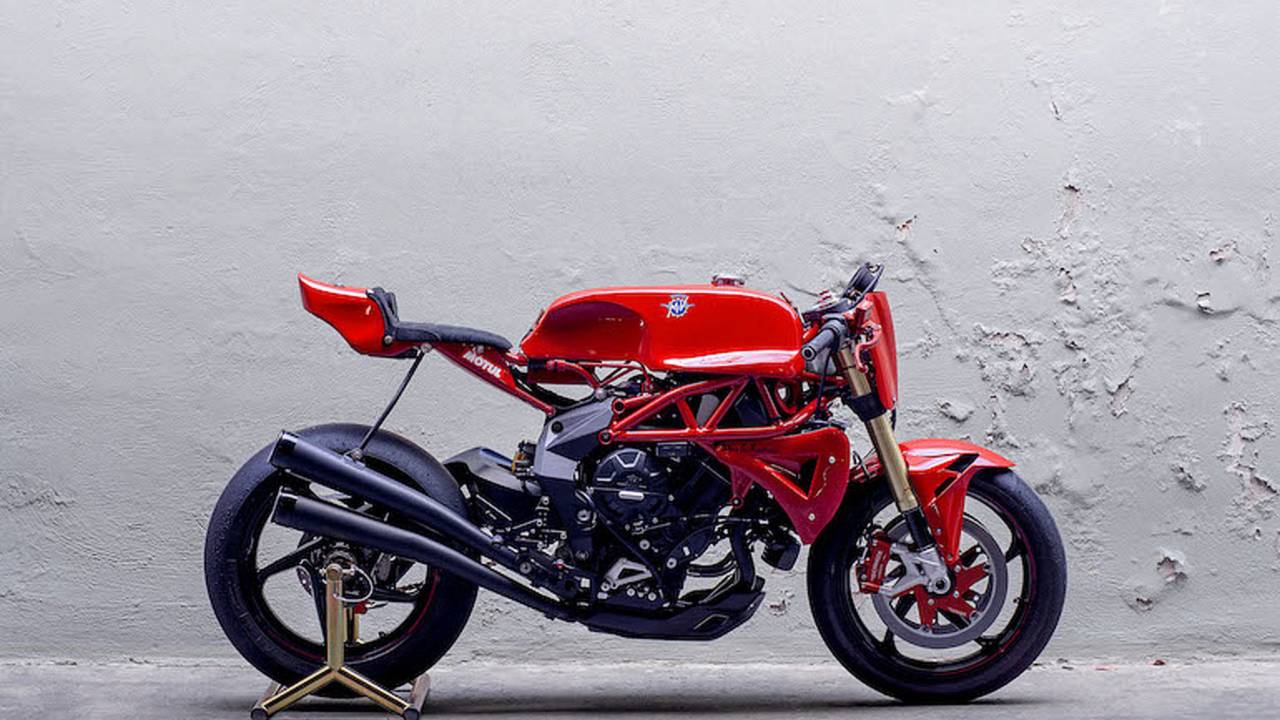 My favorite Woolie-built bike: The Deus Ago TT

The vast majority of the machines Woolie builds are fitted with some of the best components money can buy. It’s not uncommon for a Deus build to boast $25k in top-shelf aftermarket performance parts alone. Said parts often require a collection of one-off brackets or modifications to get everything to fit and function correctly, plus money for the time spent installing these everything. At times, Woolie’s builds include custom frames which obviously bring the price up really quickly. Deus often has to buy the base/donor bike for each build, too. Then there’s the cost of paying Woolie – or another one of Deus’ expert mechanics – to rebuild a bike’s power plant, another long process that doesn’t come cheap. Add to all of this the expenses that accumulate from outsourcing specialty work, such as hand-tooling leather saddles and having the bikes professionally painted by some of the best in the business (though Deus does do some of their own painting). 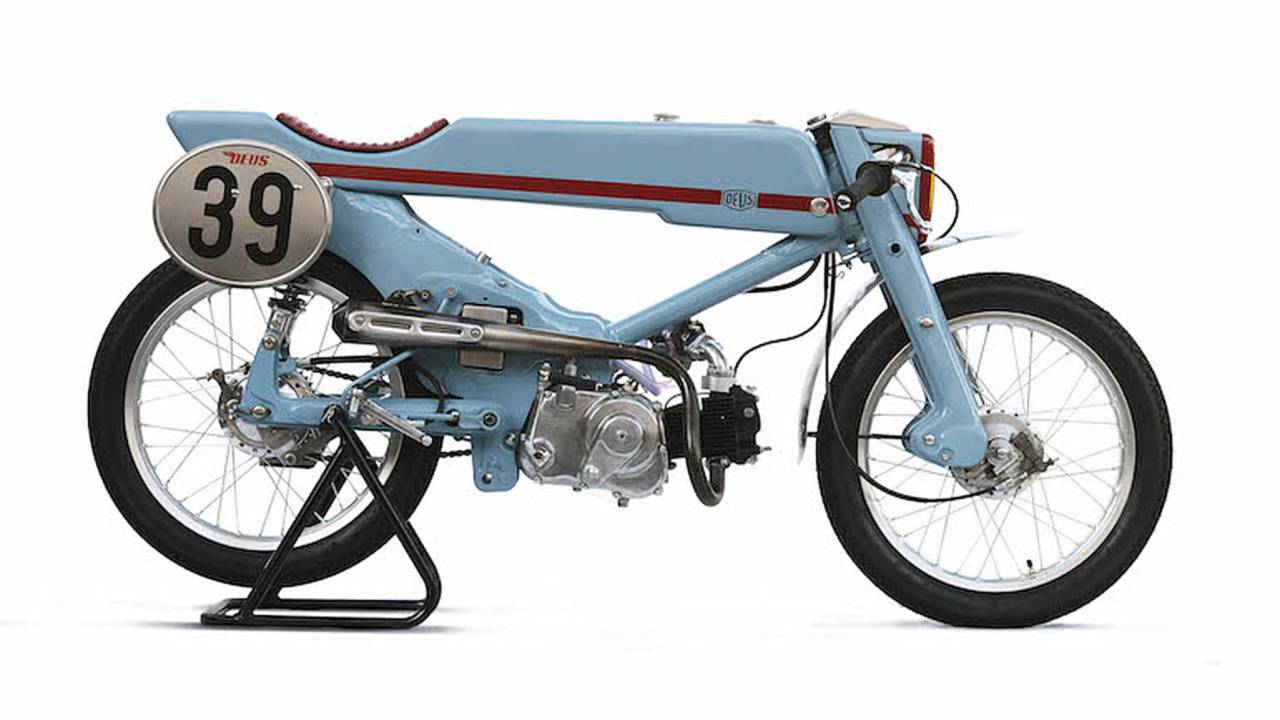 Part of what makes Deus builds so special is the lack of restraints and limits that builders like Woolaway would otherwise be confined by. A combination of incredible creativity and vision amounts to the inception of custom motorcycles where the sky’s the limit. RideApart asked Woolaway about the limits when it comes to his creations, the master-builder explained:

“There really is no limit other than liability. I have to make sure to protect the company liability wise. I’m never going to build anything that’s crazy and dangerous. All the bikes, geometry wise, are correct. The frames are straightened at Dr. John’s and they’re valved and springed for each rider. I fit these bikes for each customer, and then I test everything. Liability is the limit.” 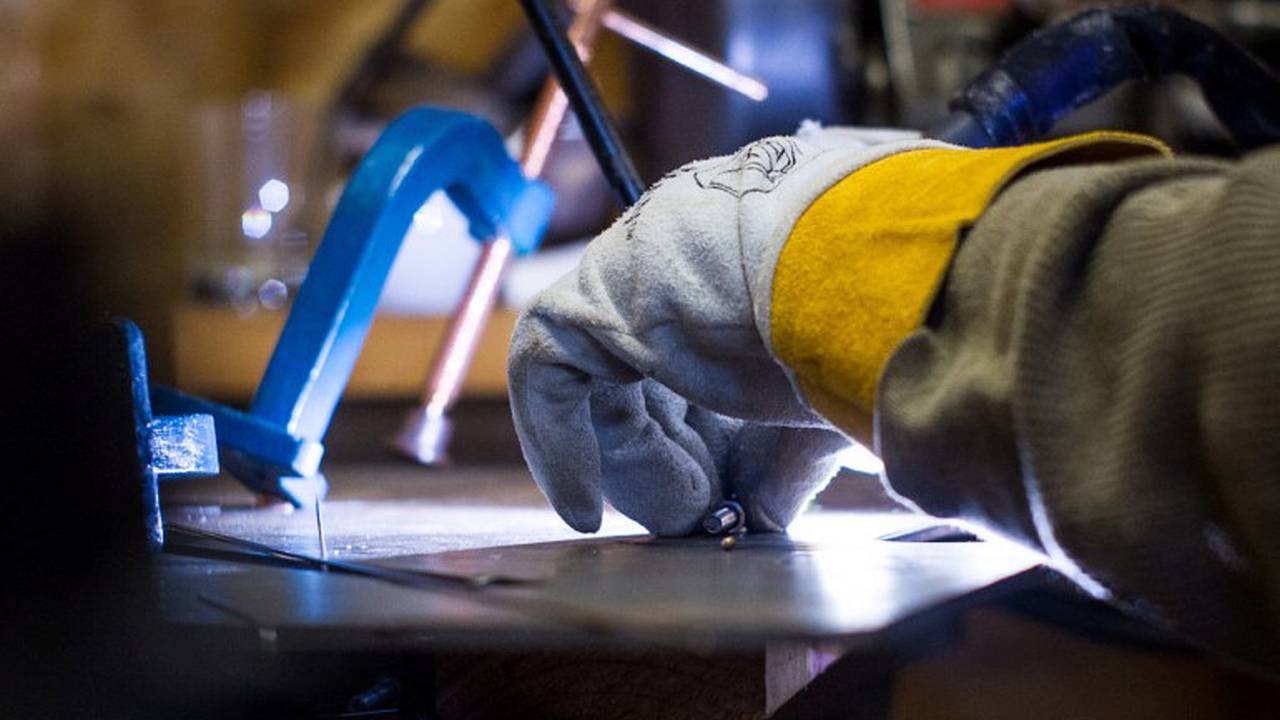 Woolie doing what Woolie does

Working with what essentially amounts to, within reason, a blank check means that Woolie and the rest of Deus' builders are at liberty to create ultra elite customs that are an integral part of the brand's identity and its enormous success. This results in Deus Ex Machina's clothing ultimately representing the unique flavor of hip that Deus builds encapsulate. More importantly, it makes Deus more than just another company that prints its name and designs on clothing, Deus is actually creating and doing cool tangible things in the real world.

"It's a lifestyle experience," said Julian Heppekausen, Deus’ General Manager. "If we build a strong community, sales will come with that."

After developing a following in the two-wheeled customs world, manufacturers took notice of the now iconic moto-lifestyle brand. Various Deus builds were directly tied to or commissioned by manufacturers like BMW and MV Agusta who both enjoyed having one of its modern bikes undergo a Woolie-crafted transformation. 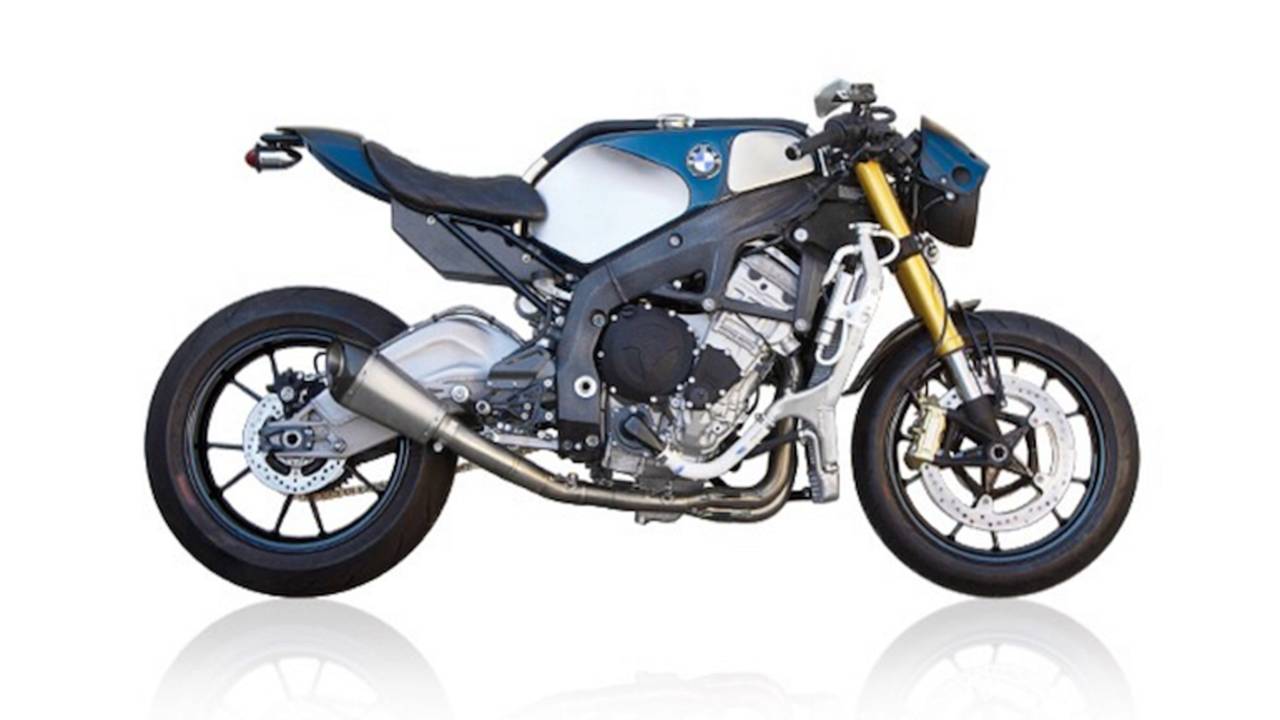 After establishing a presence and a hip, modern image, Deus caught the attention of a handful of A-listers. This lead to Deus’ bikes and apparel frequently popping up in the tabloids or being ridden and worn by some of today’s biggest celebrities. This unsurprisingly lead to exponential growth as well as a particular status that companies can’t simply buy. Ryan Reynolds and Orlando bloom each own several Deus builds that they’re often photographed riding, which helped get the company’s name out there, but it exploded onto the fashion scene when a long list of A-listers like David Beckham and Chris Hemsworth were spotted sporting Deus apparel. 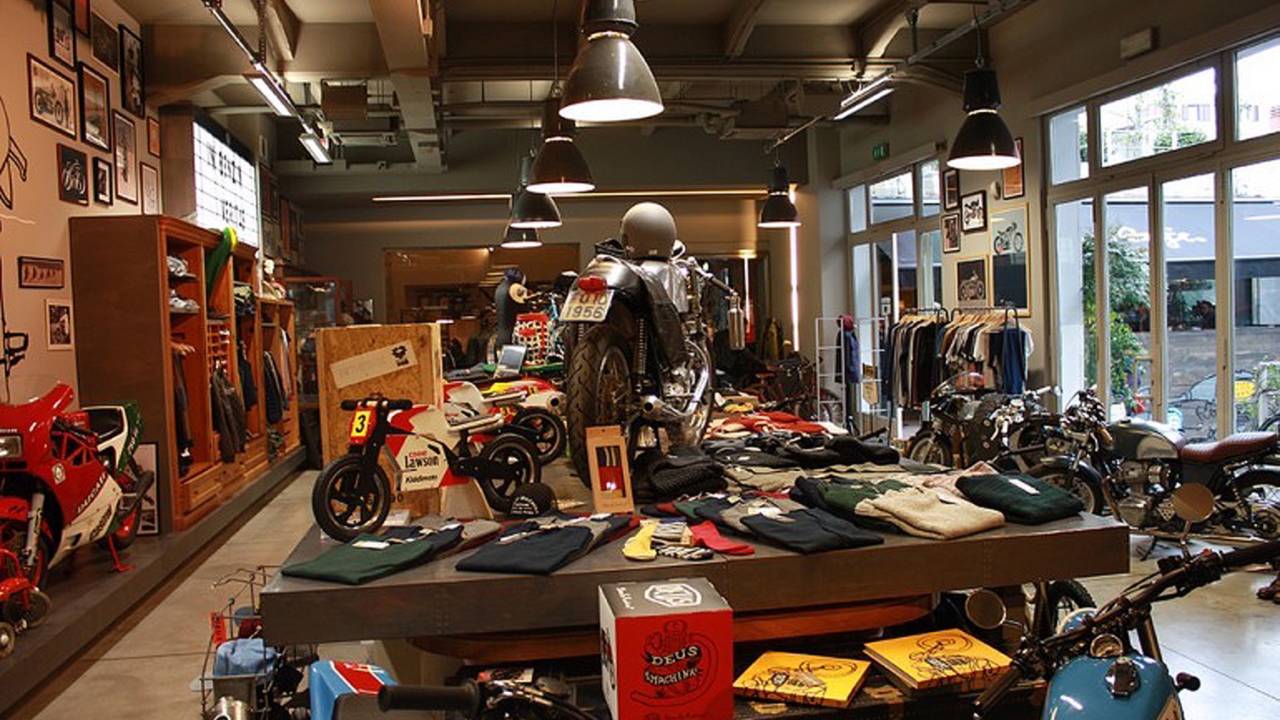 Deus started off as a single unassuming storefront in Australia before becoming a global enterprise, but without Jennings’ deep pockets and wealth of experience Deus wouldn’t have been able to evolve into what it is today. While the idea of a high-end cafe/custom motorcycle shop and gear retailer/clothing store/surf shop/record Label/art gallery/ bookstore/ bicycle shop (and ritzy bar and restaurant in Milan) is a fairly novel concept, the idea of spending money to make money is as old as money itself. With $250 jeans and hoodies, and extremely expensive custom bikes, Deus is able to maintain an elite exclusivity. The brand’s opulent prices are part of what gives it a lot of its prestige, while making it tons of money in the process. 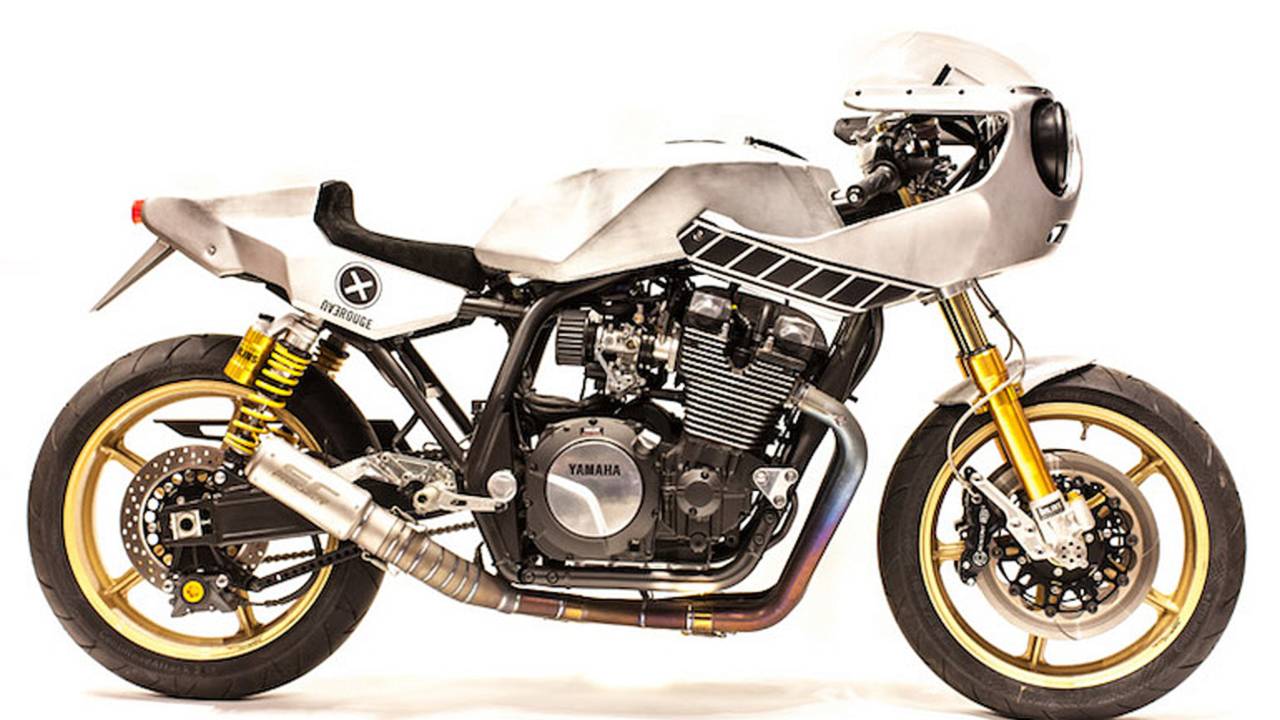 As big of an effect as the celebrity customers have had on Deus’ prosperity, the identity and brand that is Deus Ex Machina still traces back to awesome custom motorcycles. The bikes are what make Deus cool, and their apparel is an extension of that. While the clothing is stylish and all, it’s the bikes that are mainly responsible for moving merchandise.

"We lose money on every bike I make, but the investment is not some intangible asset. It's worth millions in marketing,” Woolie explained. “They're beautiful, but the problem is they're so expensive. You can't make any money making a motorcycle like that."

The Deus Blaster, complete with surfboard-rack

Luckily for motorcycle and customs enthusiasts all over the world, Deus has found a way to deliver some of the finest one-off machines on the planet and make them work in synergy with a clothing and lifestyle brand built around those same superb hand-built custom motorcycles. So long as Thor, Deadpool, and ex-members of One Direction keep wearing the clothing, we’ll keep getting the bikes. Money well spent.