We Get Dirty in Indian's Super Hooligan Series 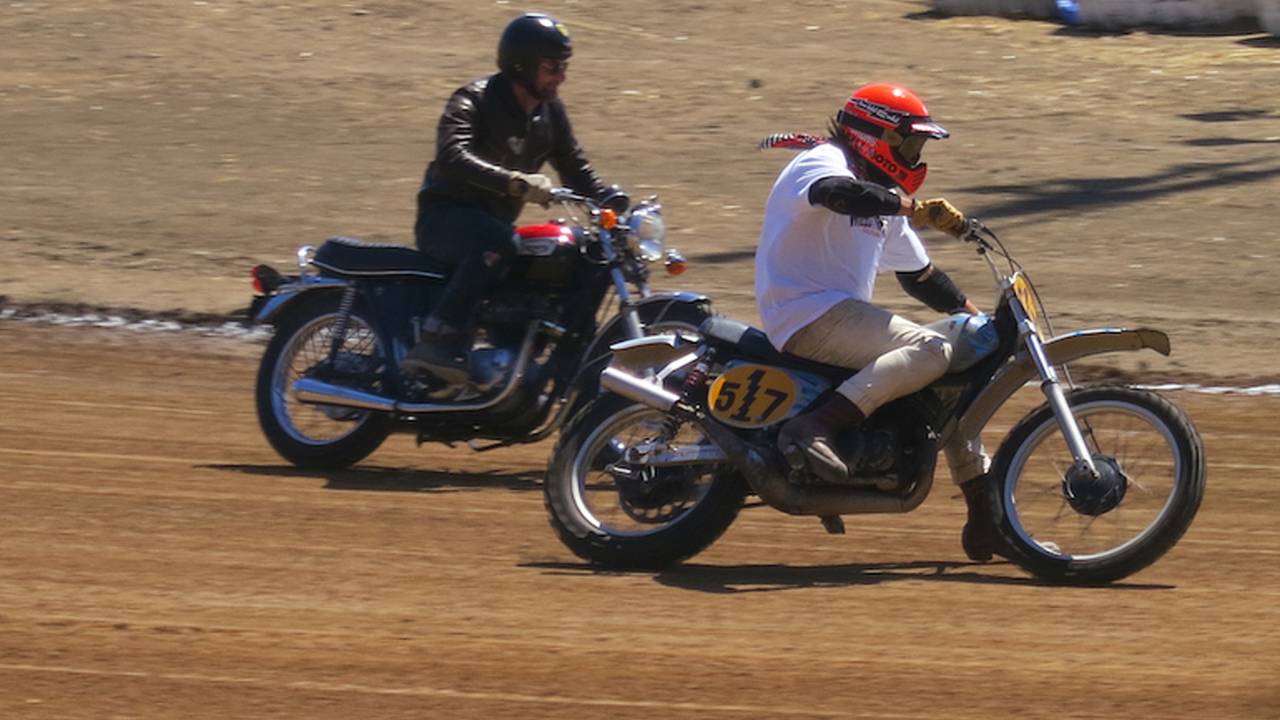 We take to the track as part of the Super Hooligan series. Things probably could have turned out better...

Hooligan is a word of Irish origin, referring to hoodlum, juvenile delinquent, rowdy lads loose in the streets creating mayhem and disorder. In its home territory it's often used to refer to people who show up at sporting events with no purpose but to fight other spectators. In moto-terminology, though, hooligans are just active youngsters – and seniors – who like to race old motorcycles on dirt tracks without much in the way of rules, licenses, or bureaucracy.

Indian Motorcycle and Roland Sands Design noted the marketing possibilities and recently teamed up for the Super Hooligan National Championship. The series promotes Indian’s racing campaign with the new FTR750 race bike, and Sands’ custom designs and lines of parts and apparel. The winner will take home a new Indian FTR750, retail value $50,000. The current points leader is Andy Dibrino on a Harley, Triumph-mounted Joe Kopp in second, trailed closely by Californian Brad Spencer (also on a Harley-Davidson). The top Indian-riding competitor so far is Jordan Graham in fourth on a modified Scout. Kopp’s win at a recent event in Santa Maria, California, put him just ahead of Spencer in points.

“I wasn’t looking back for him but I could hear him,” Kopp said of Spencer. “It felt good to cross that finish line first. Brad was one point ahead of me coming into today’s race. Now I’m four points ahead of him. This win means a lot but there are still three races to go in the season, so it’s not over yet.”

Another layer of lifestyle has now been added to the show with the association of Wheels and Waves California, which joined the Hooligans for this event in Santa Maria. Imported from the annual gathering in Biarritz, France, the loosely unorganized group incorporates the holy trinity of west coast recreations - surfing, skateboarding and motorcycling. The California chapter is being orchestrated by Paul d’Orleans, aka the Vintagent, longtime MC at the Quail Motorcycle Gathering and Custom and Style editor for Cycle World magazine.

Roland Sands chooses an Indian Chieftain Dark Horse as his flat track steed of choice, because he has enormous cojones.

The unofficial RideApart racing division, Team Geezer, had planned to enter a BSA 500 in the Vintage class, but the bike wasn’t properly fettled in time. Instead we entered the Run-What-You-Brung class on an all-purpose ’88 Honda NX250. Despite the wrong tires, gearing, and the rider’s age, things were going well until the first turn of the main event.

With a decent start, I was fourth into the turn when WHAM! I got T-boned on the left, hit the ground, and someone ran over my left ankle, which was quite painful. Plus, the clutch lever had my left hand pinned so I couldn’t get up. Finally the corner worker lifted the bike and I gimped off the track. Bummer. But at least I hadn’t been passed by series sponsor Roland Sands riding an Indian Chieftain Dark Horse, which would have added to the pain.

My (perhaps not-so trusty) steed shortly before the race.

While some cynics and house-bound trolls have dissed the whole hooligan theme of racing street bikes on flat tracks as more style than substance, fact is these folks are out there having fun on a variety of old machines. The participation of more vintage and classic clubs forecasts a growing future, and contingency money from Dunlop tires, Motul oils, K+N Filters, and Bell helmets brings more fast riders to the Super Hooligan class. What's not to like?

Three races remain in this year’s series, with the October 14 finale set for Southern California’s Bolsa Chica State Beach. For more information on the Super Hooligan National Championship visit rolandsands.com Special thanks to crew chief Alan Sparkman for retrieving and loading my bike, and driving the truck home – tasks I could not have undertaken in my hobbled condition.

The crew from Revival Cycles drove from Texas for the festivities. Cindy Crawford (not) brought a nice custom BMW R 1200 RS.

Older BMWs have become a popular platform for bobbers.

Jamie Robinson (center) of MotoGeo got fifth in Super Hooligan on a Triumph.

Hooligan tech inspection is a thorough but casual affair.