Why the Range Rover-Chasing New York Bikers Look Like Idiots 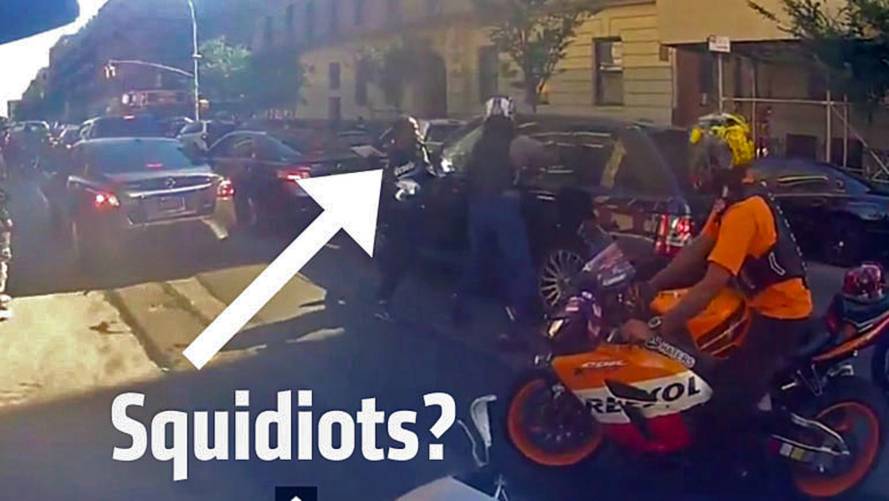 This New York Bikers Video has gone viral on the internet. A biker gang in New York attacks a family in a Range Rover. What a bunch of idiots. Here's why.

You’ve probably seen the video of the biker gang in New York fighting with a Range Rover already, it’s the most popular thing on the Internet this morning. The thing is, despite running over multiple bikes, it’s not the Range Rover driver that’s at fault, it’s the riders. They’re idiots. Here's why.

Evidence of Idiocy #1: The near complete lack of safety gear, aside from vests.

Let’s start from the beginning. One of those huge packs of unskilled sport bike riders that ride around in huge groups, blocking traffic, revving engines and otherwise flaunting their physical inadequacy issues is doing their thing on a highway in New York. Caught up in the midst of it is a family in a Range Rover Sport.

Whichever guy has the camera stuck to his helmet rides alongside the car as one of his fellow shoal members appears to begin castigating the driver for something. Failing to give way to the massive group of jerks on sport bikes? Minding his own business? Having an actual job?

In the midst of his road rage, said rider pulls in front of the Range Rover, in dangerously close proximity, and slows down a little bit. As he’s doing so, the driver fails to hit the brakes in time and gives the rider a little tap from behind, causing him to lose control of his bike and crash.

Evidence of Idiocy #3: Losing control of your motorcycle.

Now, this is all obviously the fault of the no-gear-wearing, poorly-skilled, testosterone-fueled guy who caused himself to get hit, then fell over, right? Well, that’s not shoal mentality, is it? The bikers angrily surround the SUV, intent on some skewed sort of squid justice.

We can’t really see it in the video, but apparently the bikers began to punch, kick and otherwise attack the vehicle at this point.

The driver, who has his wife and small child in the car, has enough, stomps on the gas and runs over some bikes before taking off.

“He feared for his life and the lives of his wife and daughter,” the NYPD told The New York Post.

The riders give chase. Much bad riding, pointless engine revving and group beeping ensues. At one point, one of them appears to pull over in order to type something on his iPad.

Evidence of Idiocy #4: Mass beeping. I mean, have you ever heard a motorcycle horn? It’s hardly intimidating.

On an off-ramp, the Range Rover comes to a halt and one of the squids runs up and tries to open the driver’s door. Again, the driver takes off, knocking down a bike.

More unskilled riding ensues and, predictably, the Range Rover eventually gets caught in traffic. We see a squid remove his helmet and use it smash the driver’s window. At this point the video cuts out and all we have remaining is the Post’s report that the driver was treated for a “slash” on his face, his wife and daughter were unharmed and no arrests have yet been made. No injuries have been reported for any of the riders, despite their complete lack of safety gear.

What exactly were these guys so mad about? Their buddy fell off his bike because he was riding like an idiot, and all of them were acting like jerks. The driver ran over their bikes because they were threatening his wife and kids. Did they think they were entitled to sole use of a major highway? Do they not recognize the right of an individual to defend his family from physical violence?

The thing is, despite their intimidating group presence, each and every one of the individuals involved would likely have responded similarly had they found their family threatened in a similar fashion. I know people who ride in these groups and, aside from being a little below average in terms of their ability to make smart decisions, none of them are violent criminals, they’re just guys looking to belong to something.

At what point does membership in group include threatening a little girl? It’s not tough, it’s not manly and it’s not what motorcycles should be about to these guys or anyone else. But it’s now what bikes represent to this family, and hundreds of thousands of other non-riders who will read about this in the news or watch the video online. It’ll change the way some people react to riders and may even result in some other car driver potentially putting one of these riders’ or one of our lives at risk. And that’s just stupid.

Do you agree, disagree or have another take? We want to hear about it in the comments below.

Update: Jalopnik has several videos recorded by the gang on the same ride, prior to this incident. The uploaders have since attempted to remove said videos from the Internet, with no luck. They do not make the bikers look good.

Update 2: MYFOXNY reports that two arrests have been made, while one rider reportedly remains in hospital with serious injuries.