Watson On: Trying To Buy A Second Bike 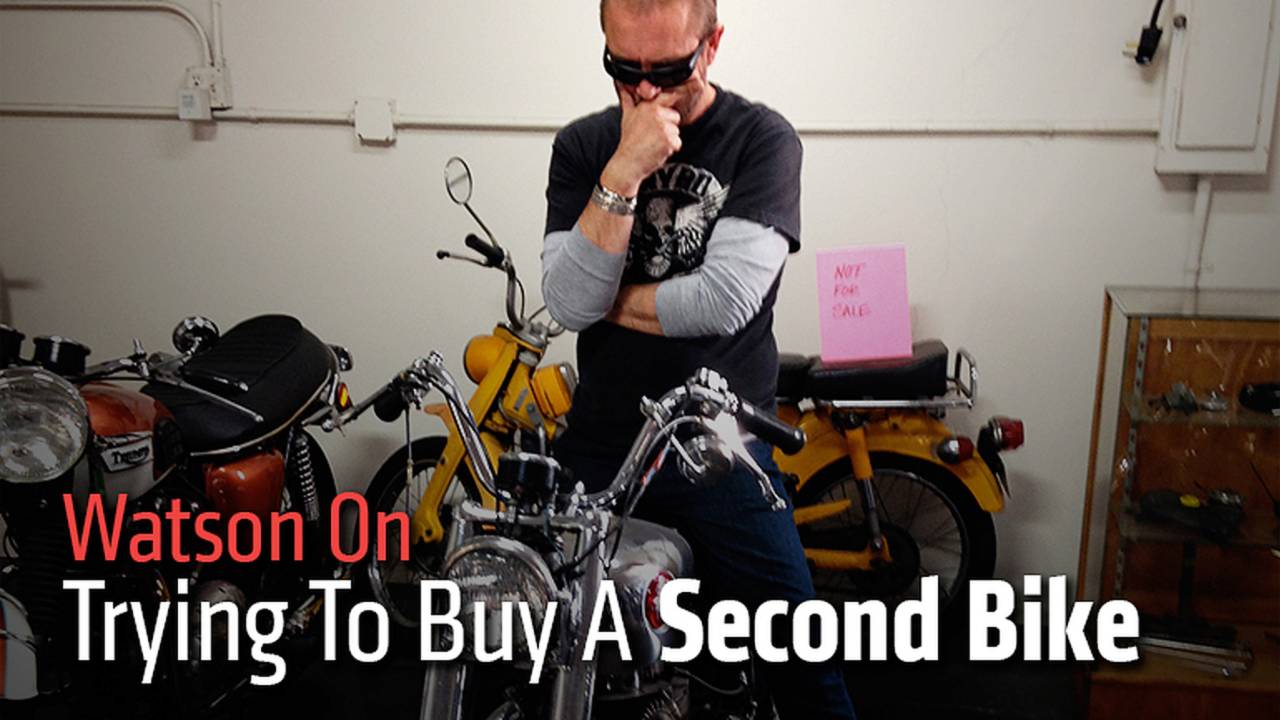 The perils of buying a second bike.

I’m told that a fool and his money are soon parted. Well no matter what this fool did last week nobody it seemed wanted to take his cash. After several weeks of research and checking prices and values both here in the U.S. and in Europe, I set myself a goal to try and find a second motorcycle. But no matter where I went, or what I did that second bike still eludes me.

I decided to keep it simple. I set myself a budget (and a reasonable one, I thought) even though it might mean our new baby doesn’t get clothes for a few years and the dog will have to gaze pathetically at the neighbors until someone finally agrees to feed her.

I also decided that, no matter what happened, I would keep an open mind and look at whatever bike came my way. Heck, I’d consider any type of motorcycle, providing it was within my budget and wasn’t made up of stolen parts or was going to catch fire the moment I rode off down the road on it.

Ideally, I’d like something British that will throw oil around and make me cry every time I kick-start it. But, a Suzuki or Honda from 30 plus years ago would also work. Unfortunately all of my plans fell by the wayside, as I got increasingly frustrated until I found myself standing in the showroom of an Italian motorcycle dealer lightly caressing the handlebars of a truly beautiful looking bike.  I knew it was miles outside of my budget, it felt and looked like something from the 22nd Century and was utterly, gob smacking gorgeous. It was also going to kill me, as it was going to be way beyond my capabilities of riding it properly. But I’ll come back to that bike in a minute.

My quest began with Craigslist. Some friends had suggested to me that CL is a bit like a psychopathic dating website. The big difference is that instead of the victim being hunted down by an axe wielding murderer, you (the victim) call, make an appointment and then obliging turn up on the killer’s doorstep, clutching fistfuls of dollars only to be slaughtered.

I chose to ignore my friends’ advice. There were a ton of bikes in my area but once I whittled them down to what was worth looking at and was basically a box of broken parts that may have once been a motorcycle I was left with two – a 1967 BSA Victor and a 1973 Triumph Bonneville.

I didn’t know much about this BSA, so I looked it up and got a feel of what a late 1960s British pseudo-scrambler bike should be like. This one was all there. It started first kick, and sounded good too. There were a few spare parts and some literature and a spare gas tank as well. The owner was selling it as he had bought it for his teenage son who now didn’t want to ride it. The victor was not an A1 show bike but it was straight and all the numbers matched and I really liked it.

The next bike I saw was delivered to me at a nearby Starbucks because the young owner was worried about people like me coming to his house and murdering him. I liked this kid and I don’t mean that in a derogatory sense, but he was very young.

I was also impressed with just how much he knew about his 1973 Triumph Bonneville and all of the work he had done on the bike he was trying to sell to me. It made me happy to know there are young guys out there working on old bikes and learning about them as I did when I was young.

Like the BSA, the Triumph was a straightforward, clean looking motorcycle. It had been serviced and there were a lot of new parts. It still needed a few things doing to it but all of the hard work had been done. I could ride it for the next few years before even thinking about tidying it up a bit more and selling it on.

I then hopped up the road to look at a 1959 BSA A10 Super Rocket. A dealer was selling it on consignment for an antique dealer who thought they’d spotted a quick profit opportunity but I think sadly missed the mark. This was a really nice bike. If a 10 would be a show bike this was a 5. Someone had chromed everything on it, literally everything, the headlamp was wrong, it had the original West Coast-spec mini-ape handlebars, which were horrible, and there was a Honda taillight bolted to the rear. Small things, but all easily sorted and I genuinely could see this BSA sitting in my garage. I really, really liked it.

But herein lies the problem. Every single bike I saw last week, and I saw probably upwards of 25, was seriously over priced. I’m a sucker when it comes to something I like. I will go and buy it even if I know I am paying over the odds. But every single old bike I saw was way off the book value. Either owners think buyers are gullible or they are just being greedy.  Both BSAs were not hundreds of dollars overpriced but several thousand dollars too expensive. The Triumph Bonneville, which I really wanted to buy, I could not justify giving the owner what he wanted. Even though he told me that he just wanted to break even and get his money back.

For a while I thought it was me, but a friend told me that I needed to keep on looking and that the right bike will turn up. It’s hard to negotiate with people when they want way too much money. In each case, rather than insult the seller, I told them I liked their bike, but felt we were far too apart for me to even make an offer.

This is why at the end of a long week, I found myself sitting on a Panigale 899 in a Ducati dealer’s showroom. It was painted in fabulous flat metallic white and the sales guy had been very helpful and far from pushy. He’ given me a brochure, told me all of the details and answered all of my questions and then let me sit on the bike. Then he told me the price out the door. Oh man, I am back to where I started. I’ll let you know what happens next.

Do you have a second bike? If so, what did you get and why? Still trying to decide? What are you looking for?