New Bikes vs. Used Bikes For The Same Price 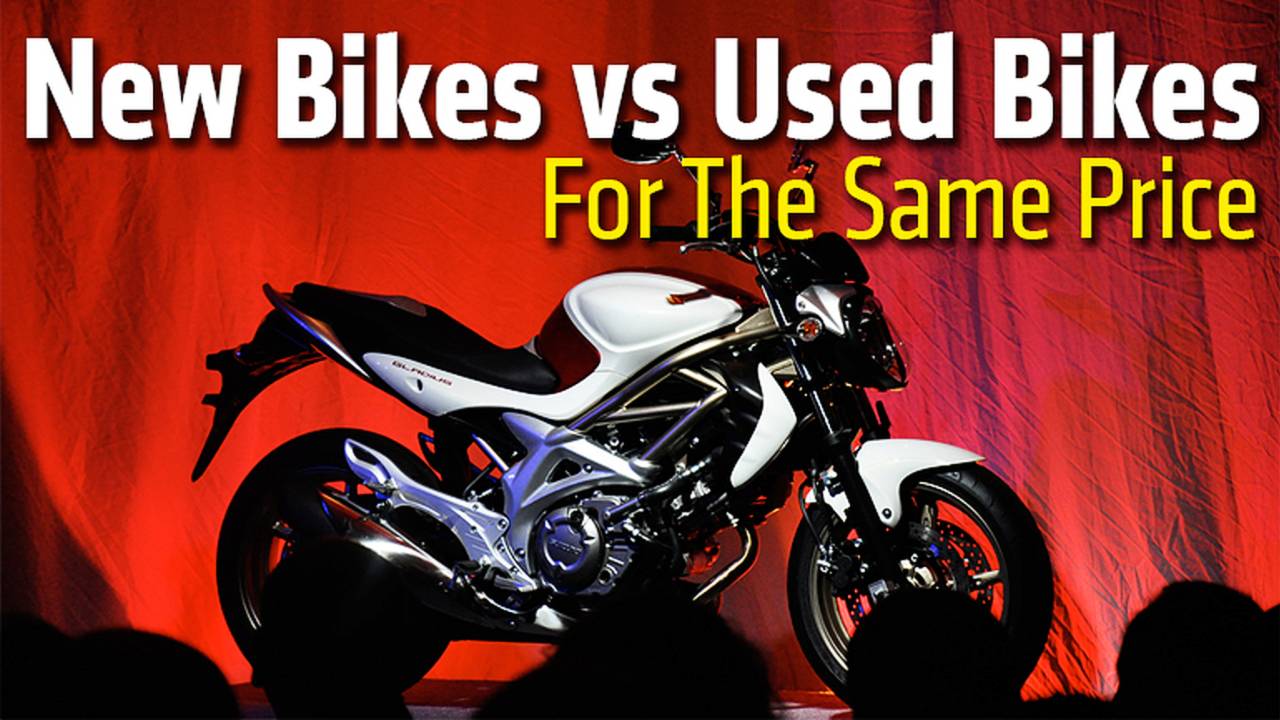 Depreciation. The bane of new bike buyers, but good for those who wait a few years to snatch up a bargain used bike. Here are the best used bikes to buy now

Depreciation. The bane of new bike buyers, but a boon to you and I, who wait a few years to snatch up a pre-owned bargain. Can an older bike really stack up to a brand new one?

You’re going to read about some incredible bargains below. So why buy new at all? Well, it gives you the ability to pay for the bike with monthly payments and little or no money down. It also gives you a reliable machine covered by a warranty and one you know hasn’t been crashed or abused by someone else.

The advantage of used is obviously in the lower purchase price. But you also get a few unseen benefits. If you finance a new bike, you’ll often be required to spring for fully comprehensive insurance. Then, if you crash it, you’ll either be out for that payment and the insurance deductible. With a used bike, you can opt for cheaper, third party-only insurance and repair the bike yourself, economically and over time.

New gives you the latest and greatest, used gets your more bang for your buck.

The cheapest literbike you can buy new today is the $13,899 Suzuki GSX-R1000. It makes 180 bhp, weighs 448 lbs (wet) and does without TC, ABS or other fancypants electronics. That bike received minor updates in 2012 and you can find bikes from that year, with very low miles for a few thousand less. Here’s one in South Dakota with only 660 miles on it for just $9,500.

Trouble with the GSX-R is that, well, it feels a bit plain. The antidote for that is to go Italian. Here’s a 180 bhp Aprilia RSV4 R in St. Louis that has only 1,300 miles and is listed at only $11,500. Not only is the RSV4 a more capable handler than the Suzuki, but it’s far less common, too.

The raciest bike in the supersport class remains the Yamaha YZF-R6, even now, eight years after it was introduced.  But why spend $11,190 on one when you can pick up this identical 2006 model in Florida for just $4,000? Heck, it’s only got 5,000 miles on it and someone’s already paid for the pipe, Power Commander and air filter.

Want to go faster? Here’s a 2013 Yamaha YZF-R1 fitted with the new traction control system with only 570 miles for nearly a grand less than a new R6.

Our pick in the sport naked class has to be the $9,999 Triumph Street Triple R. But, lots of people positively hate the “Dame Edna” headlamps. Those were introduced for the 2012 model year, along with other changes to the frame, subframe, exhaust and suspension. But, the previous generation isn’t that far off and, as a result, there’s high demand for them in the used market. Don’t expect to save more than a couple grand for one in good condition, with low miles.

The good news is that $10k budget nets you virtually anything you want if you’re buying used. Our friends at Transportation Revolution in New Orleans are selling this tidy Ducati Hypermotard 1100 SP for just $9,499.

Most bikes in the dual-sport class are either prehistoric dinosaurs or high-strung race bikes from Austria, which don’t make great used decisions due to their insane service requirements. Bikes like the DR-Z400S, XR650L and WR250R all hover around the $7,000 price point. But, you can find them used starting around $1,000. Spend a little more for one in good condition, with the common upgrades already carried out and you’ll be onto a real bargain.

In 1969, the Harley-Davidson Sportster received the most significant change in its now 57-year-long lifespan — electric start. So why buy new? The cheapest 2014 model starts at $8,399 and is essentially identical to every other Sportster produced in the last five decades. We found this one on eBay for just $3,400.

The Triumph Bonneville is the retro motorcycle. New, they cost $7,899. If you’re shopping used, look for a 2009 and on base model Bonneville which has the new, fuel-injected motor and 17-inch wheels which will accommodate modern tires. Since that year, the bike has been largely unaltered and you can find them starting around $5,000. They’re popular though, so they go quick.

Of course, for even less money, you could get a real classic motorcycle. We love the Honda CB400/4. Here’s a restored example going for just $3,950.

If you’re putting in big highway miles, it’s hard to beat the $15,8990 Yamaha FJR1300. Unless of course you’re riding the even more comfortable Honda Gold Wing. Here’s an example of the first year of the current model with just 17,000 miles on it (barely broken in) for just $9,500. Spend the money you save on chrome gewgaws and CB radios.

What are the best used bike bargains you’ve found online?