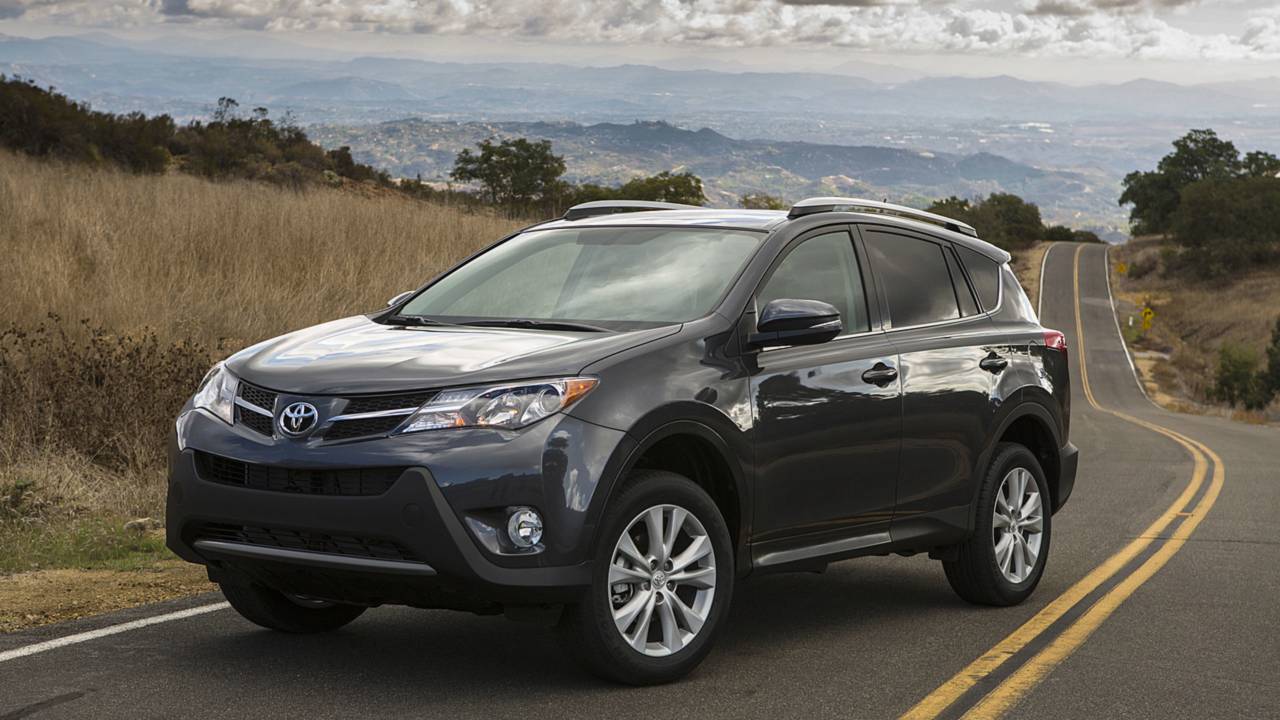 DriveApart Review: 2013 Toyota RAV4 For 2013, Toyota has completely redesigned the RAV4 crossover for its fourth-generation. The new model has a new...

For 2013, Toyota has completely redesigned the RAV4 crossover for its fourth-generation. The new model has a new bolder and more dynamic interior and exterior styling and a slew of new features under the new metal too. While the joining between a sport utility vehicle and a passenger car may seem like a compromise, it is not. For us who need the ruggedness and storage capacity of an SUV, but not always the rough ride and low gas mileage, a crossover – with the handling and performance of a car - is a perfect match.

The all-new design goes along way to modernizing the RAV4. The new aggressive body styling is a large improvement over the previous generation as is the change from a side-hinge door to a more traditional roof hinge rear gate. All new features like blind spot monitor and the Rear Cross traffic alert allow for safer driving. A big feature for 2013: The upgrade from the older four-speed transmission to new six-speed transmission improves fuel consumption and the RAV4’s drivability.

The least expensive model, the LE, is very basic and, if you want all of the extra goodies and options, you need to bump up to the more expensive Limited Edition RAV4. Also, in Front Wheel Drive guise, the RAV4 gets a pretty swell 24 city, 31 highway however, with the optional AWD, the RAV4’s MPG decreases to 21 city, 29 highway.

The RAV4 has a lot of cargo space for a smaller vehicle.

With a max towing capacity of 1,500 lbs you won't be towing anything massive but you definitely can haul a trailer and a motorcycle or two. The 38.4 cubic feet of cargo space with the seats up and 78.4 cubic feet with the seats down means you can carry a large flat screen TV and your groceries too. Add into a 900lbs payload and you’ve got what you need for a fun powersports weekend.

There is a marked improvement from the 2012 to the 2013 models in terms of drivability. It’s funny how a six-speed transmission can change the whole ballgame On our drive in the Arizona desert outside of Scottsdale, we took both all-wheel and front-wheel drive equipped RAV4s across a wide range of terrain – from smooth tarmac to rutty dry riverbeds and the RAV4 came up aces in any environment and situation we threw at it, especially when an early-winter rain muddied up a lot of the roads. The ride was spot on for a crossover in its price range, giving you a power when needed. We tend to push cars during testing and the RAV4 proved itself on both winding mountain roads and across town. While some may gripe about the lack of a V6, Toyota give the option of more power on the larger Highlander and, truthfully, the larger engine isn’t needed. While the RAV4 won’t win a Paris to Dakar race, it will get you and your family around town in comfort, style and with a lot of room to spare and, if you’re like us and want something that can give you some basic tow and haul capabilities, the RAV4 can pull a few things, like camping and riding gear and a bike or two, so you don’t need to change your daily driver for a larger weekend warrior vehicle anytime soon.

The 2013 RAV4 comes a with Toyota's 2.5-liter four cylinder engine that produces 176 horsepower and 172 foot lbs of torque. Unfortunately, the V6 engine has been discontinued as Toyota wanted some daylight between the RAV4 and the larger Highlander. The old 4-speed transmission has been jettisoned and replaced with a brand new 6-speed transmission designed to enhance fuel performance. The first and second gears are intended for around-town performance while the fifth and sixth gears are overdrives. The Dynamic Torque Control continuously monitors torque control through and electromagnet and can adjust the torque between the front and rear from anything between 100:00 to 50:50, which can help get you out of some hairy situations, if needed. Also, there is a new Sport Mode that changes the engine performance for a sportier and more dynamic drive.

The RAV4 comes with a whole bunch of new goodies that previous generations had lacked. TWe liked the optional Blind Spot Monitor and Rear Cross Traffic Alert safety systems that notifies the driver when cars are approaching the vehicle fro all sides. Whiplash Injury Lessening have been incorporated into the front seats to reduce the impact to the user's head during a rear-end collision.

The MPG for the RAV4 is above average for a crossover, which is a good thing considering gas prices aren't going down these days. As we mentioned, the FWD RAV4 gets 24 city, 31 highway and the AWD model, 21 city, 29 highway. It's not Prius mileage, but it’s pretty great for a crossover.

Much of the interior has changed from 2012 to 2013. All iterations of the 2013 RAV4 feature standard privacy glass, cruise control, audio with a 6.1-inch LCD touch screen, daytime running lights. A multi-information display, Bluetooth hands-free calling and audio and, something we really like, a standard rear backup camera – which we feel is a must on every car, truck and SUV. The higher end XLE and Limited models get better seats, dual-zone climate control, integrated fog lights, a sweet power moonroof, heated outside mirrors. The navigation system with Entune is optional. The RAV4’s interior has been redesigned to maximize storage and cargo capacity, which leaves enough for a family of four, all their stuff and family pooch too!

With an entry price of $24,145 dollars for the LE model, $25,135 for the XLE model and $27,855 for the Limited model, the 2013 RAV4 has seen a minor increased in price but with a lot more added in standard features. That said, there are options; all wheel drive will cost you an extra $1400 dollars and navigation is extra too. Compared to other mini-utes in the segment, the 2013 RAV4 is little more expensive than the competitors - the 2013 Hyundai Tucson comes in at $19,395, $4,750 cheaper than RAV4, the 2013 Ford Escape and the 2013 Honda CR-V have an entry prices of $22,470 and $22,795 respectively, both a few thousand dollars cheaper than the RAV4. But, the RAV4 comes with a lot more standard premium content which balances out the price differential in the end.

The 2013 RAV4 is a major contender in the ongoing crossover battle with its good gas mileage and spot on handling, performance and haul capabilities. When you add in great optional and standard features and a more modern design, the RAV4 provides all the features a modern crossover needs while keeping the price and quality to rigorous Toyota standards. A must test when shopping for a new Ute.

For more information on the RAV4.