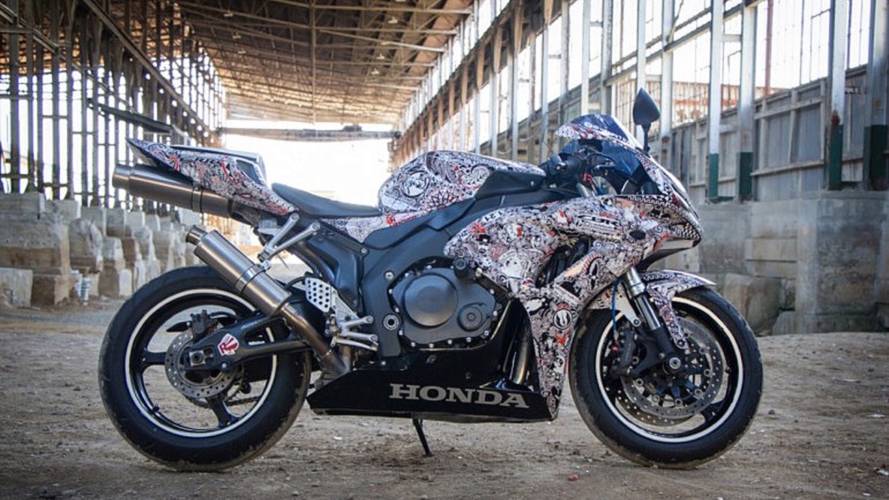 Take a look at this incredible sharpie bike customized by Mary Heatley.

Customization is half the fun of owning a motorcycle. But Mary Heatley took customizing to a new level when she decided to decorate her CBR1000 entirely in sharpie art.

Mary's bike in its original form

Mary lives outside of Bloomington, IN, and has been riding since 2012 (the CBR1000 is her second motorcycle.) When she bought it, she already knew that she would eventually want to swap out the fairings as the bike had some cosmetic damage.

"The artist in me appreciates things that aren’t commonly seen, and I knew I didn’t want something that everyone else had," she said.

As she began to consider ideas, she took inspiration from a Nissan that circulated the Internet thanks to its doodle art decoration.

"That’s when the lightbulb went on. I had a spare fairing piece we had ordered on eBay months prior that didn’t fit my bike properly, and that evening I decided to test out my sharpie skills."

the test piece Mary used before she started her project

Pleased with her test piece, she decided to take on the full project in November of last year. Her inspiration for decoration was slowly developed over the 223 hours she spent doodling on the bike.

"It wasn’t until I got inspired to add the Alpinestars and Dianese logos on the front piece that I realized just how much my inner nerd could really shine with this bike and make it truly unique with the influential things I’ve loved throughout my life. From there it just snowballed and I began to get excited about all the different characters and symbols I could add. I started to run out of space for my ideas!"

The bike has a lot of pop culture references—everything from the Hunger Games to the Grumpy Cat. Additionally, her rear cowl is made entirely of signatures from MotoGP racers she met at the Indianapolis Speedway this year.

Mary just got the pieces back from being professionally clear-coated and has reassembled the bike. She admits the project took much longer than she anticipated: "I had hoped to have it done before spring, but my job required me to put in a lot of overtime starting in January. So all in all it took me about 223 hours over the course of 10 months to complete."

Judging from the finished product though, it certainly looks like her hardwork paid off!

You can follow Mary's adventures on Instragram at @mary1krr.

Thank you to Mary for the photos.

READ MORE: So You Want To Be A Bike Builder | RideApart