5000 Miles On A Bonneville - Crafting My Perfect Bike 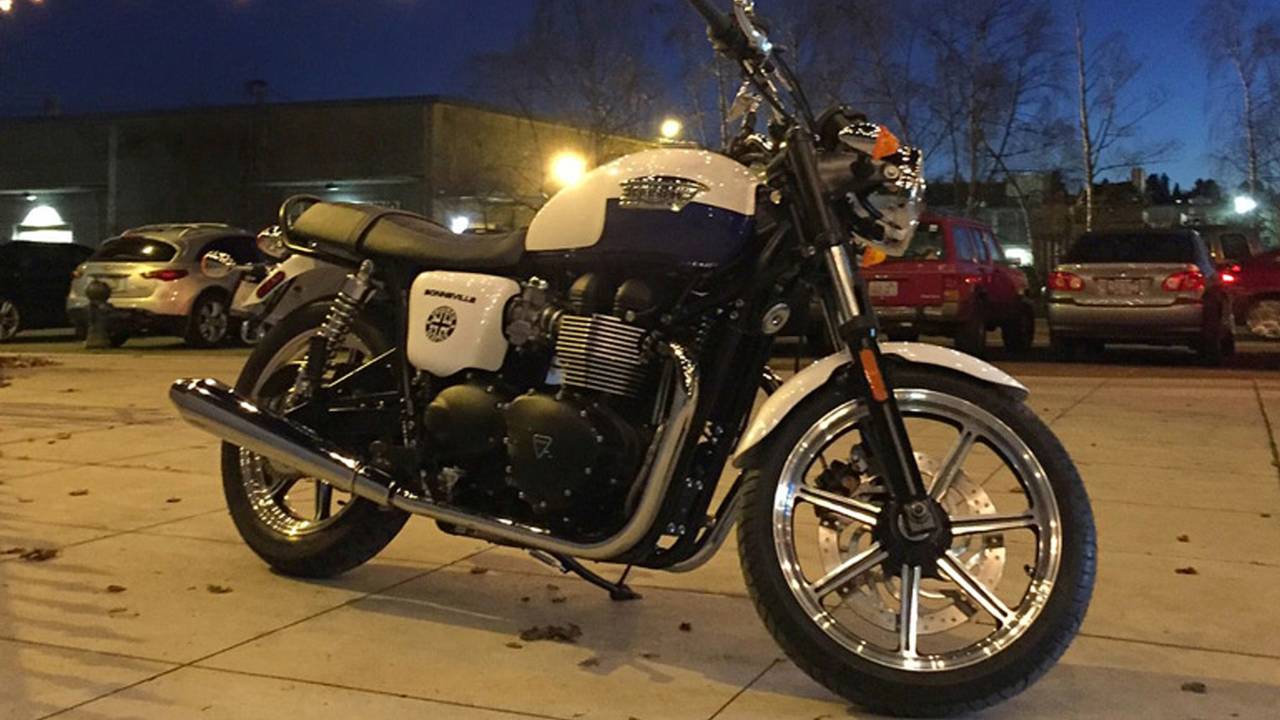 After 5000 miles riding my Bonneville, I've started turning wrenches on it. I've begun to make it mine in small ways, and I know I'm going to continue.

Turning bolts forms a bond, busting knuckles tempers it, and bleeding on a vehicle is what makes it mine. I've been riding my Bonneville for 5000 miles, and I've finally formed that crucial bond—on a bike I never intended to. After 5000 miles riding my Bonneville, I've started turning wrenches on it. I've begun to make it mine in small ways, and I know I'm going to continue doing so for a while.

A vehicle isn't truly mine until I bleed on it. Nearly a year ago, I learned I wasn't cut out to be a parkour artist. One shredded knee, three months of physical therapy and tons of Advil later, I realized that I was months from being able to move well enough to raise my feet to rest on my Monster's rearsets. I had to make a choice: take a season off of riding or buy a completely different bike. I ended up with a kind of bike I'd normally never consider.

Not riding was not an option, so seven months ago I started looking for a bike to ride while I healed. At the end of a tough month of comparison shopping, Triumph's Bonneville came out at the top of the list. I could afford it, it was good quality, the riding position would be easier on my knee, and the resale value was strong.

At the end of January 2015, I took on a 2014 Bonneville SE. There were four miles on it before my test ride, and three weeks later—after a trip to Portland for the One Moto Show—I'd put on another thousand. Currently, I'm sitting at just over 5000 miles and feel like it's time to touch base on what I love about this bike right as I begin to change everything about it.

I spent the first 1,000 miles alternately elated to be riding in February and scared of the potential consequences of breaking in a new motorcycle. Luckily, my fears weren't justified. Riding out of the dealership with a brand new bike, I faced the concern that whatever I did to the motorcycle was going to follow any owners after me until the end of time. A sobering thought, but I powered through my paranoia. A trip to the dealer at about 1,200 miles was resolved with a "no really, that's normal," and I got on with riding the wheels off of it.

MUST READ:  The 2015 KTM 1190 Adventure Review: Crossing the USA From Coast to Coast | RideApart

The bike's gone to Portland, OR, and the furthest reach of the Olympic Peninsula. I took it over Stevens Pass and back again. Day after day, mile after mile, it has performed admirably... but I felt like something was missing.

Surprisingly, I actually stuck to my plan for quite a while. I rode the motorcycle as Triumph intended and learned a lot about what I wanted in a bike. Eventually though, I decided to start fidgeting with the Bonneville. Unlike any car or bike I've modified in the past, this time I knew what I was changing and why.

More importantly, after seven months and 5,000 miles, I've learned more about who I am as a motorcycle rider and how the Bonneville meets my needs—as well as with how it doesn't.

The areas I'd like to change are broken down into a few basic categories:  ergonomics, image, and experience. As much as this bike relies on it's image, it's also a blank canvas. Those three points of emphasis are my base to making a motorcycle that's perfect for me.

The stock riding position is wonderful for visibility around town: upright, easy to see around vehicles, and easy for people to see you. The peg placement is what originally made me buy my Bonnie in the first place. After about an hour though—even with the gel seat—I get seat pain and numbness in my groin. For someone riding to a bike night or Starbucks? No problem. But putting 600 miles down in a day? Difficult.

As I've gone on, I realized that the seat wasn't the issue—it was the handlebars. Chasing seat changes bore little payoff. However, I've cycled through three sets of handlebars in the last three weeks, and no matter how different each one made riding the bike, none of them induced the pain that came with the stock bars over long distances. I haven't quite determined what I'll end up with yet, but rest assured, you'll know when I do!

I gave it 5000 miles. You see, riding like a proper English gentleman just doesn't work for me. I'm thankful I didn't buy a Thruxton, and I know I don't want to turn this bike into one. When I glanced in windows as I rode by them, I felt upright and conspicuous; I felt like a magazine advertisement. Granted, this is me fully changing the image of what Triumph tried to do, but to suit my style, I'm going on a rabid anti-chrome spree. Big chrome megaphones need to find a loving home. Chrome riser handlebars just weren't me either, and it's definitely time to invest in some exhaust wrap while I’m in there.

Again, it's time to make it mine. To me that means lower bars, less chrome, smaller exhaust, and building things instead of buying them at every opportunity. I know that there's a final set of bars, a fender eliminator and lots of other small things that'll help change the image to be a little less flashy and a little more racy.

For 2014, Triumph revised the mufflers on their Bonneville line—presumably to address the perception that the bike was too quiet. There's a nice exhaust note, but I still want more. As it sits, I find the bike to be quietly competent, which is a high praise as far as appliances go. But I don't want my recreational device to be an appliance! Triumph has left me with a lot of room to figure out what I want in an exhaust, and even offer reflashes to account for whatever I might choose to add later.

For a while, I just removed the mufflers entirely, but it turns out loud pipes don't save eardrums. It upped the experience factor by a large amount, which made the bike more engaging. There was more shifting and more smiles when I blipped a downshift. Unfortunately, more frowns from fellow motorists and the constant fear of disturbing wildlife in the middle of nowhere meant that until a real solution presents itself I'm rolling with stock cans. I know that in the near future I'll be removing everything chrome, making it sound better, and making it more comfortable for longer distance rides.

For how unsure I was about this bike 5,000 miles ago, I feel like I have a good roadmap and I'm looking forward to making this bike a reflection of my personal aesthetic. It's a wonderful starting point, and I’m really excited to see where it ends up.

I've turned a few wrenches on it, busted a knuckle or two, and found the things I want to change. It's gonna be a fun onward voyage. There're a lot of miles left on that odometer and I can't wait to spend my weekends wrenching, riding, and sharing how I've made it a motorcycle nobody could have sold me.